A dream of living his best life and encouraging others to pursue their dreams brought Troy Ganser to a 25.29 acre piece of land in New Haven, where his imagination runs wild and his creative energy is spent building a child’s wonderland. “We came from an eighth of an acre lot on the southeast side of Fort Wayne … and we’re starting a business, fumbling along the way,” he reflected.

T.A.G. Art Company, specializing in services like caricatures, face painting and party entertainment, has been running strong for 22 years, though Ganser himself knows that this has only been through the grace of God.

“Our blessing – and they are all blessings, miracles, loaves-and-fishes miracles, I make that very clear to everyone, I don’t care if they’re Catholic or not – we live in a huge blessing and our goal, I guess, through all this pain and suffering is just hang in there,” he stated. 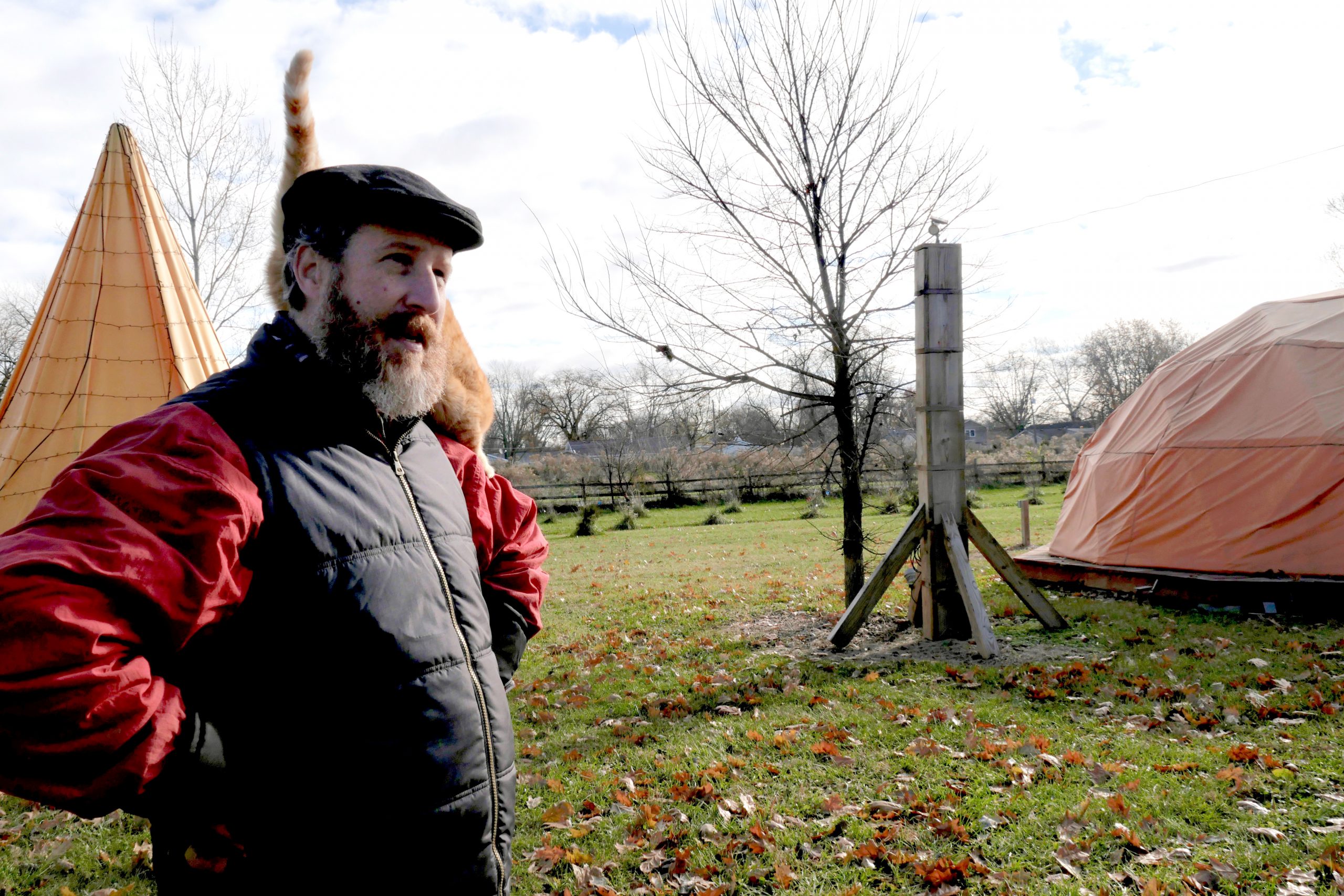 Photos by Jennifer Barton
Troy Ganser, owner of T.A.G. Art Company, and one of his adopted feline friends surveys the village he and his sons built on their property, called the Fun Farm. Ganser uses his talents to bring joy and encourage other artists in the pursuit of their dreams.

Survival became the name of the game for T.A.G. Art Company last year during the height of the pandemic, when all entertainment was canceled for months at a time. He points out how many small, family-owned businesses were forced to shut their doors last year. Fortunately for him and his family, T.A.G. Art was able to weather the storm. “It’s funny, I’ve always been faith-filled, but I think this was just the last straw against any fear,” Ganser reflected.

The business has taken hits before. In 2011, he got the idea to host a “Merry not Scary” outdoor Halloween event to give children an alternative to the “blood and guts” that the holiday has become. It turned out that 2011 was the worst year for October outdoor events, raining more days than usual. His business ended up in the red that month. “And I just remember singing, defiantly singing in praise, just praying,” he said. Ganser’s prayers were answered, and instead of losing everything, the next year became the company’s most profitable year to date, more than making up for the losses of 2011. 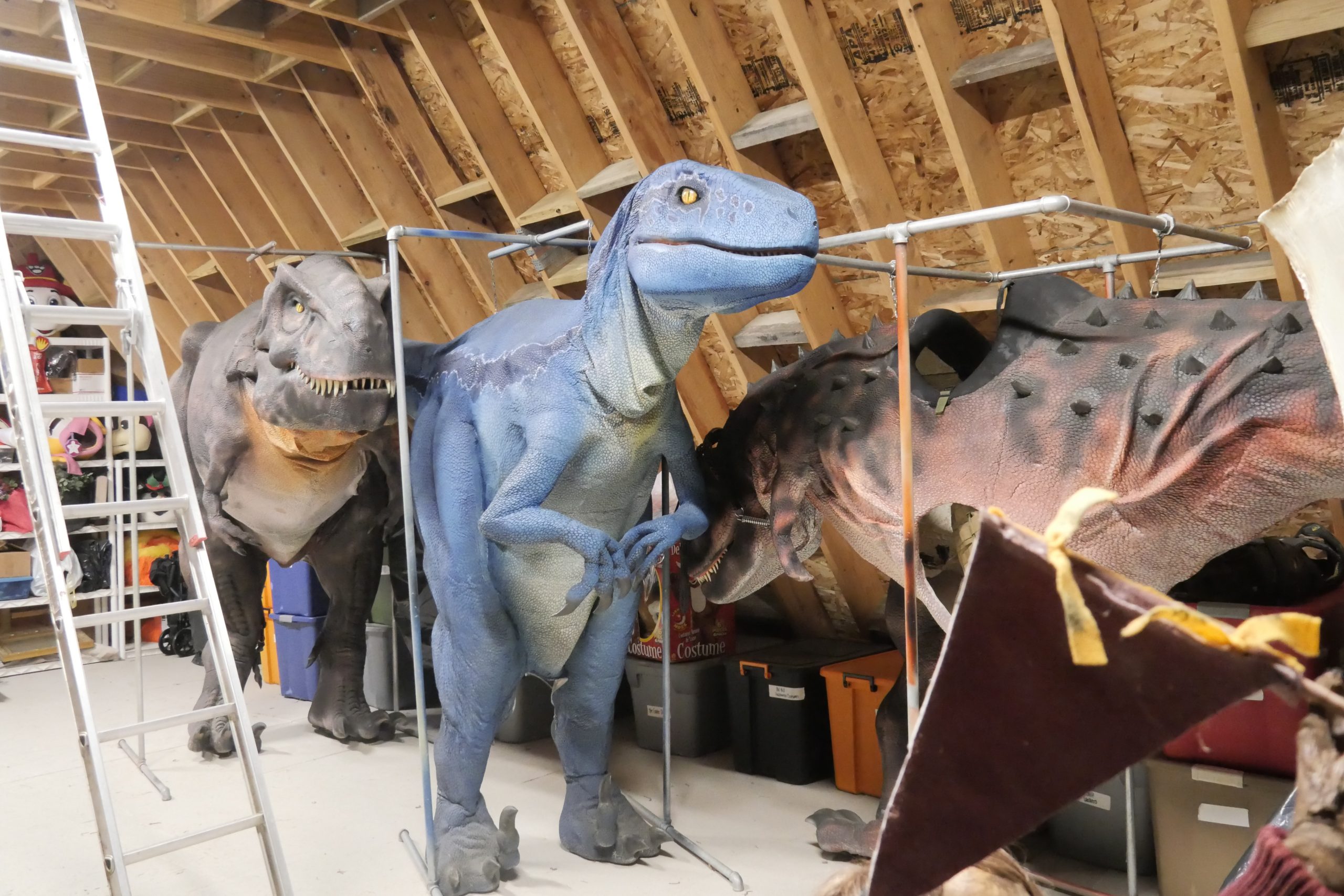 One service that T.A.G. Art provides is a blast from the past with lifelike dinosaur creations that can make an event positively prehistoric.

By rights, Ganser should not have the blessings that he enjoys. Twenty years ago, when the company had maxed out all available space in attics, basement, and garage spaces in their Fort Wayne home, he sought a new one. A planner for the city of New Haven showed him an aerial photo of a piece of property with a fish-shaped 3-acre pond. His wife, April, was amazed – and wondered how they could afford it. Ganser gives all glory to God in “navigating this and walking hand in hand, fiercely walking in faith; defiantly walking in faith.”

Before settling on the property, Ganser asked Msgr. Robert Schulte, former rector of the Cathedral of the Immaculate Conception, Ganser’s home parish, to bless the land and hopefully banish its ghosts. Prior to T.A.G.’s ownership of it, the property had always been in the hands of one family and came complete with a house and several outbuildings, all of which date back to the mid-1800s. “There’s a rich history there and a rich stewardship there, and that affected us,” Ganser said.

He sees himself as caretaker of the peaceful property. To date, the Ganser family has planted 6,000 additional trees on the land, particularly native species. They have numerous rescue animals, mostly cats, but also chickens, two pigs and a goat. “I have my own personal Eden. We even have apple trees,” he joked. Some of those apple trees are even certified Johnny Appleseed trees.

Rising out of the natural landscape is something most impressive – a miniature village. Part Harry Potter, part Alice in Wonderland, and inspired by the movie “Big Fish,” Ganser worked with his sons to hand-build a castle, UFO, pirate ship and more with virtually no prior experience. He calls his creation the Ganser Fun Farm. It is not a playground; rather, he describes it as a movie set.

His hope is to make it a seasonal attraction for Christmas, Easter, Fourth of July and Halloween. It is wheelchair accessible and he would eventually like to host a Fourth of July light show instead of fireworks that meets the unique needs of veterans and people with special needs. He also plans to add a labyrinth on adjoining wildland.

He wants people to know about the Ganser Fun Farm, to come and see his creation and even to enhance it with their own creative talents. “It’s meant to be discovered.” 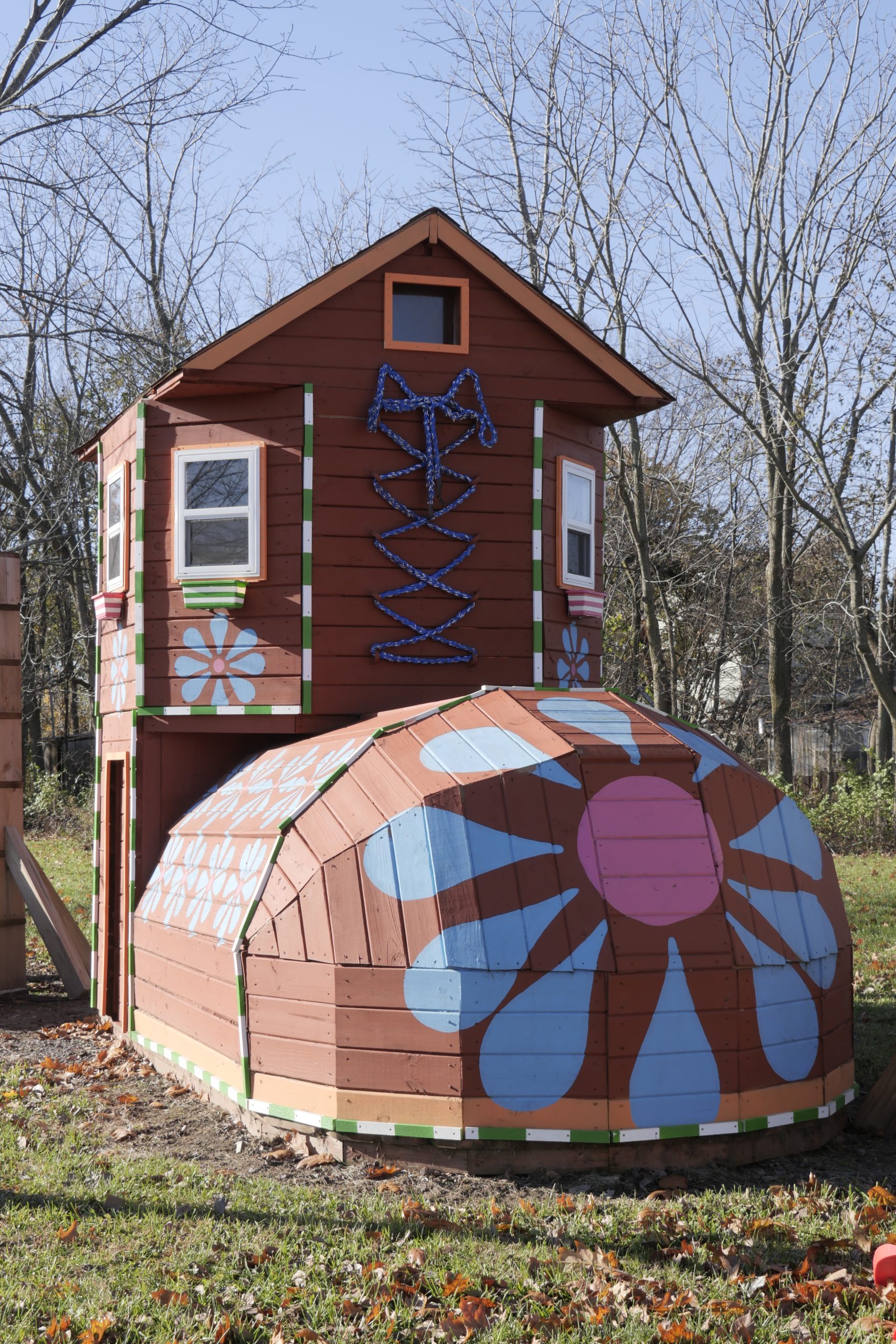 A giant shoe from the nursery rhyme about the old woman and her children brightens the landscape on the Ganser Fun Farm on the outskirts of New Haven.

When Ganser dreams, he dreams big. Some of his grandiose plans include putting on what he calls a “Catholic cirque de soleil;” a visual experience based around the seven sacraments. The script for “Catholic” is already written, and now he is simply looking to partner with others who can help bring this grand dream to reality.

His vision is to take the tools of secularism and use them to present Catholic themes. “You can seek deeper meaning and you can find it if you want, or it can be entertaining,” Ganser remarked.

Another dream of his is a television show called “The Fun Farm.” In a similar vein to “Mister Rogers Neighborhood,” Ganser would like to use the show to teach young children simple lessons with a real person that they can relate to. He wants to encourage their enthusiasm and inspire their young hearts and minds.

All these goals may seem too big, but no goal is too high with God’s help and Ganser wants to see how far he can go. “We were created to be great, to do great things.”

Ganser uses his property as a statement of his faith. In line with the “Jesus fish” pond, he built an 80-foot cross-shaped pavilion, with the village sandwiched in between. “So beginning to end, alpha omega, all things point to Christ.” In the near future, he hopes to commission an interactive St. Michael statue to be placed near the property entrance with suspended wings, sword and shield so that people can step inside and “become” the warrior archangel.

Even the T.A.G Art logo reflects his faith. Based on the ceiling of the Sistine Chapel in Rome, Ganser drew the logo using his own index finger as a model for the finger of God, with whirls of color coming off it. 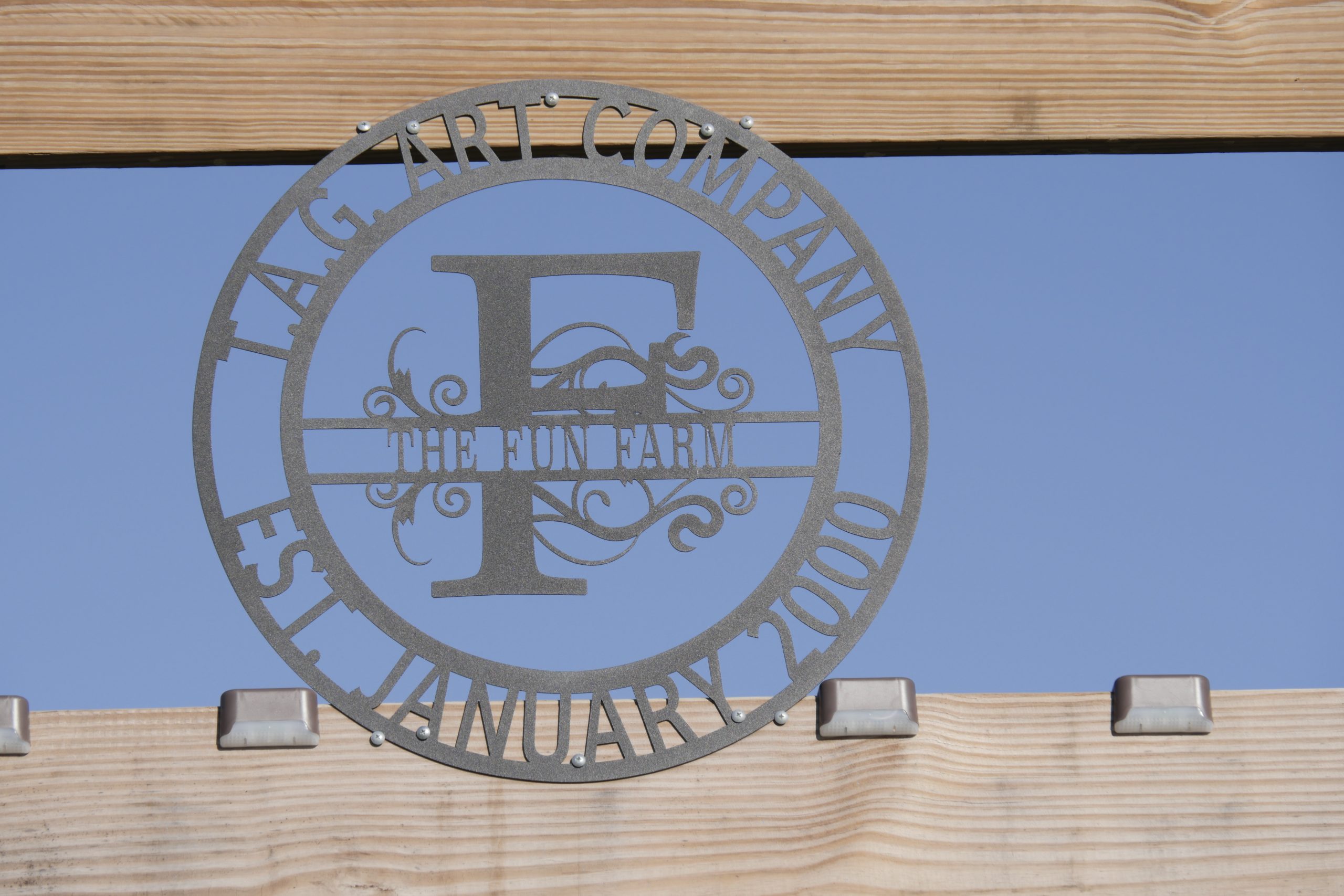 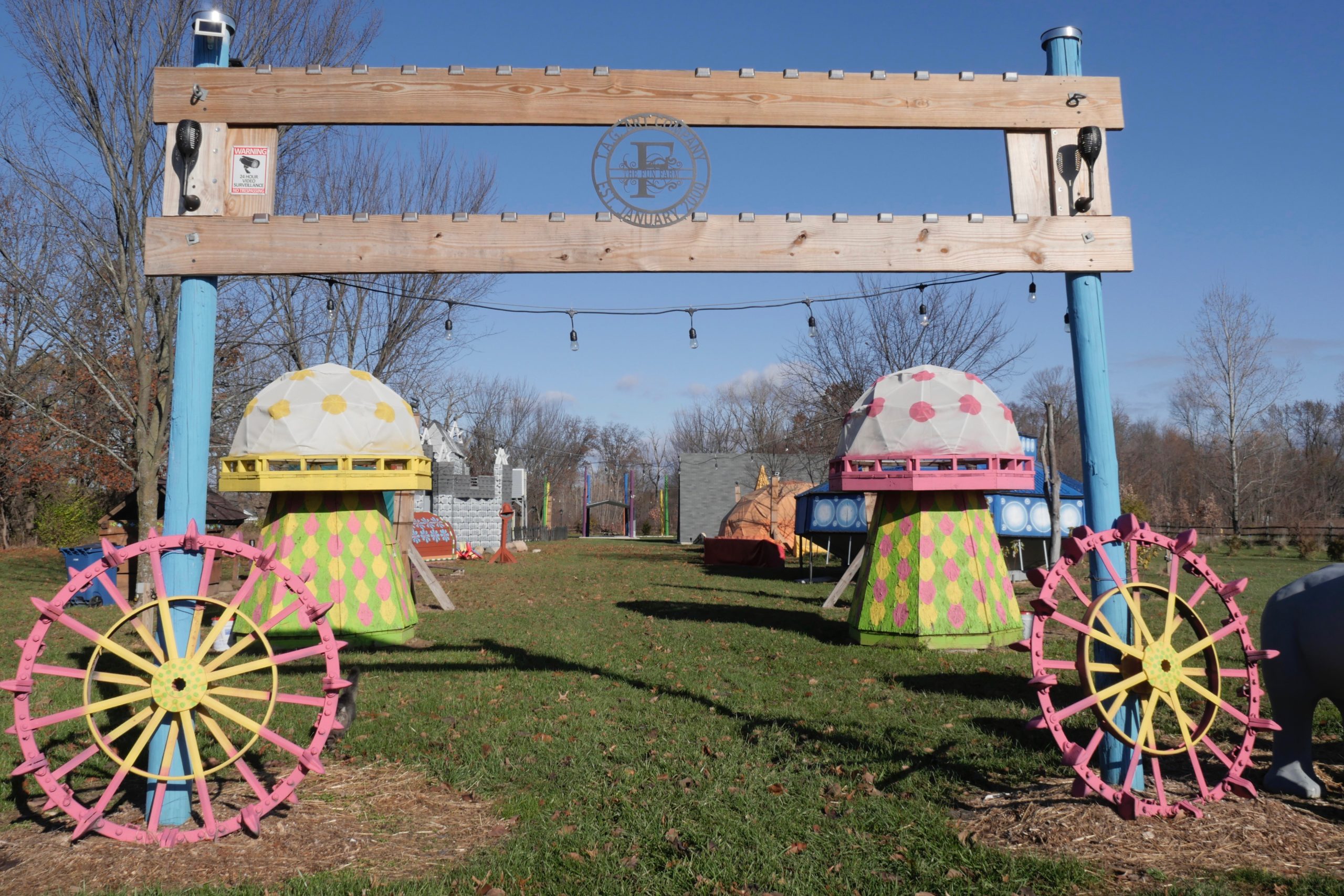 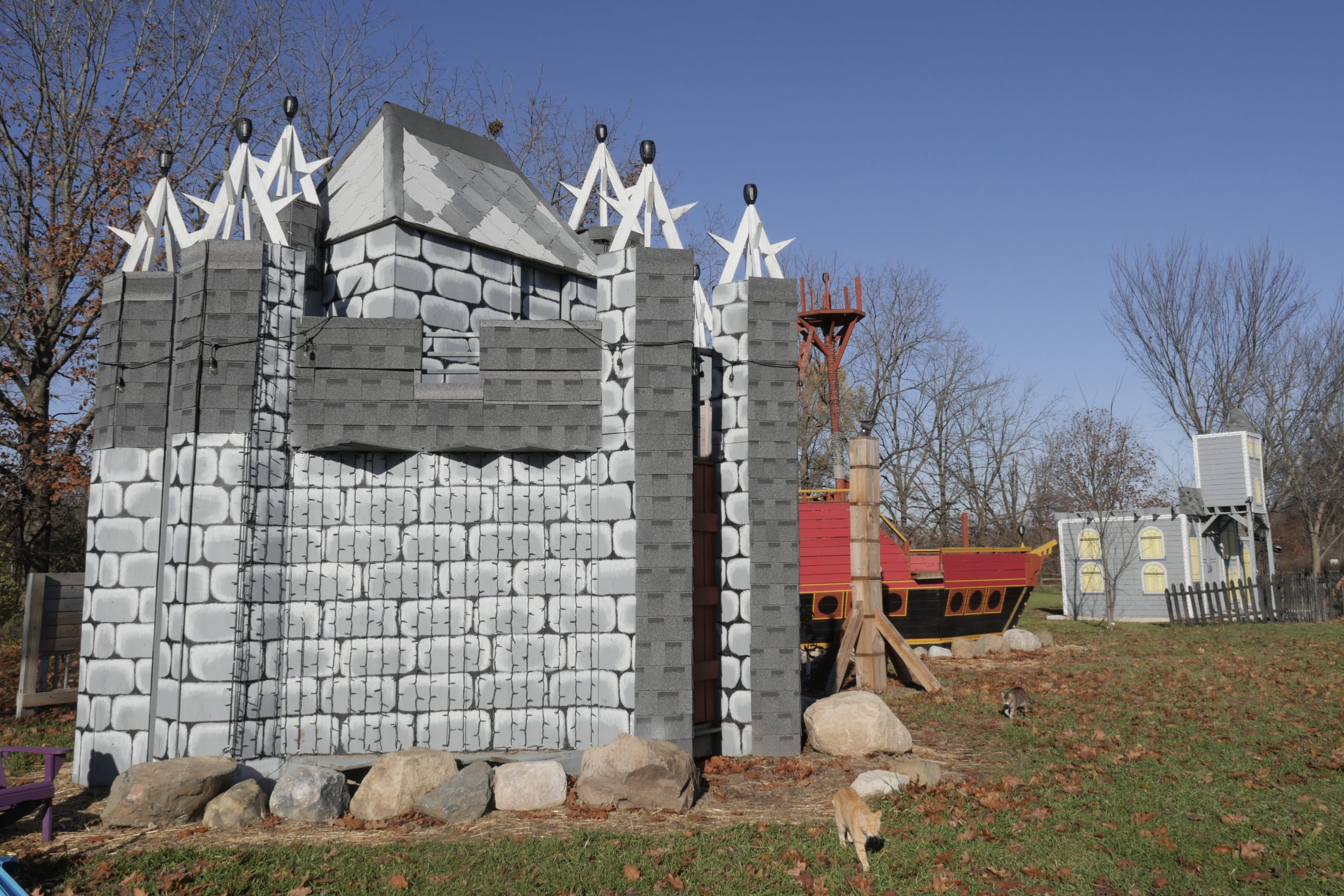 Customer service is the perfect career field for Ganser. He loves people and needs little encouragement to speak with anyone, his mind jumping from one subject to another with the speed of a runaway rabbit. He lives with tremendous joie de vivre, and enjoys enhancing others’ lives through art and beauty. Work brings him happiness, and he wants more than anything to support others in their aspirations. In a world that is filled with negative role models, Ganser wants to show people by his life what all can be accomplished when living intentionally and walking hand in hand with God.

“I am comfortable in my own skin,” Ganser said. “It was a really long, hard process to be myself. In a world where you can be anything, be yourself. If you’re being someone else, who’s being you?” 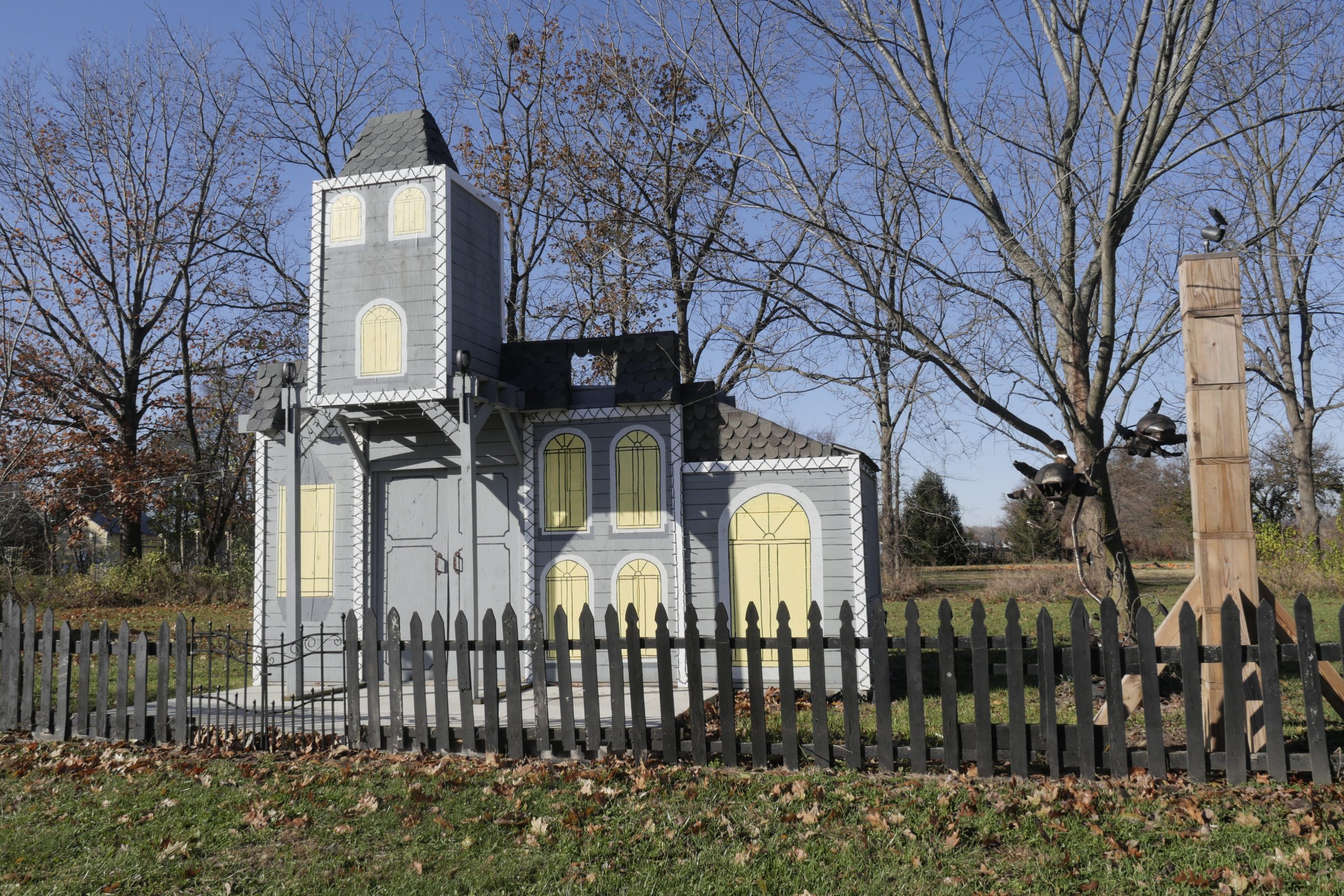