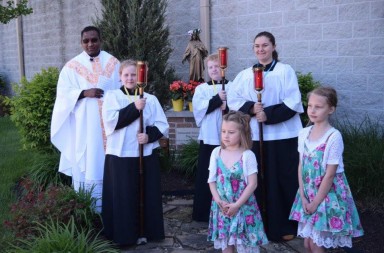 Schools across the Diocese of Fort Wayne-South Bend participated in a recent academic bowl state competition at Purdue University, West Lafayette, on May 6.

The team won first place among Class-C schools, at the Leo Regional Competition in April, ranking fourth among Class-C schools in the state. The top seven teams were selected to go to state competition.
The overall topic was the French Revolution, with the English team focusing on “A Tale of Two Cities” by Charles Dickens and the poetry of William Blake, William Wordsworth and Lord Byron.
The team worked outside of school hours on the challenging literary works. The coaches were Jordan Miller and Kathy Schall. Monica Zwick was the site coordinator. 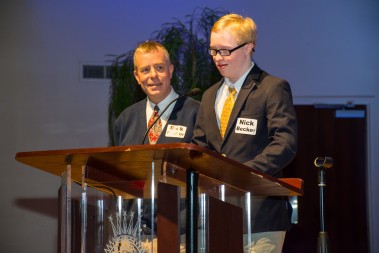 A record 310 faithful pro-life supporters gathered at the Kroc Center Thursday, April 27, for the 10th annual South Bend-area Respect Life prayer dinner — including 49 pastors and religious ministers. The event was a powerful force of prayer for life, uniting members of the body of Christ to beg for the Lord’s action in shaping hearts and minds to more fully recognize the beauty of all human life, even in situations that involve great challenge or suffering. Flourteen pastors of various denominations led guests in the hymn “Amazing Grace:” Josh Comeau, brain cancer survivor, led the worship music. Among those witnessing to the gift of every human life were Rick Becker and his son, Nick, pictured.

From South Bend, the Christ the King Academic Super Bowl team competed for the first time in the statewide competition, which for middle schools took place on April 29. The team of seven seventh- and eighth-grade students took third place overall out of 56 teams of the same population size, in the Interdisciplinary category. Under the same theme of the French Revolution they took fifth place in English, 12th in math, 16th in social studies and 29th in science.

“On my honor, I will do my best to do my duty to God and my country….” This oath was lived out by Boy Scouts from St. Jude Troop 451, chartered by St. Jude Catholic Church, when they served as the color guard for a naturalization ceremony in Fort Wayne on May 5. From left are Andrew Zink, Ryan Ward and Miles Fedders, following the ceremony at which 48 people from 17 countries became United States citizens.

DONALDSON – Angela Resendez, vocational/transition coordinator for Joint Education Services in Special Education in North Central Indiana and Cheri Ringer, coordinator of Earthcare Education for Earthworks, a ministry of the Poor Handmaids of Jesus Christ, have partnered to provide work experiences for special needs students ages 17 and older. These are students that have mild to moderate special needs and are working towards earning a high school diploma. These students can have success at an appropriate vocation but are currently underserved by programs that would provide this kind of training.

With a generous donation from the Marshall County Community Foundation, The Center at Donaldson will continue to add more work experience opportunities for JESSE students this fall.

DE PERE, WIS. — On Saturday, May 27, Rev. Frater Michael J. Brennan, O. Praem., will be ordained to the priesthood. The Mass of Ordination will be celebrated by Most Rev. David L. Ricken, DD, JCL, Bishop of Green Bay, at 2:30 p.m. in the church of St. Norbert Abbey.

Deacon Brennan, 39, is the son of Michael and Dorothy Brennan of Michigan City, and a son of Queen of All Saints Church in Michigan City. His parents now belong to St. Pius X Church in Granger.

A 1995 graduate of Marquette Catholic High School, Michigan City, Deacon Brennan graduated from St. Norbert College in 1999 with a bachelor’s degree in philosophy and psychology and a minor in religious studies.

In 2001 he received a Master of Education degree from the University of Notre Dame.

After his priestly ordination, Father Brennan will be assigned to St. Norbert College, where he will serve in sacramental, teaching and vocation ministries.

Queen of Angels Parish, Fort Wayne, carried out a May crowning of Mary on Sunday, May 7, under the direction of Father Ajay Tiru. Pictured are Father Tiru; altar servers Blake Lothamer, Riley Johnson and Cierra Lothamer; and sisters Madison Barry, left, who carried the crown in the procession, and Dorothy Barry, who crowned the Blessed Mother. Both girls are participants in the parish’s religious education program.