FORT WAYNE — Young adults of all ages and states in life, especially those living near or in Fort Wayne, are invited to Cor Jesu (Latin for “heart of Jesus”), taking place every Wednesday at St. John the Baptist Church, 4500 Fairfield Ave., Fort Wayne.

The evenings begin at 6:30 p.m. with exposition of the Blessed Sacrament, along with the opportunity for the sacrament of confession. Benediction takes place at 7:20 p.m., with holy Mass following at 7:30 p.m., celebrated by different priests each week. There is a small gathering after Mass.

Everyone is invited to attend. The Sacred Heart of Jesus — pierced for all — awaits.

FORT WAYNE — St. Peter Church, 518 E. DeWald St., will host a Mass to open the city of Fort Wayne’s annual celebration of Germanfest Sunday, June 2, at 11 a.m., featuring the music of the Maennerchor/Damenchor chorus conducted by Thomas Remenschneider. The group also will sing at 4:30 p.m. at Park Edelweiss, 3355 Elmhurst Dr., for the annual concert accompanied by a live band, followed by Heimatabend Dinner at 6 p.m. serving traditional Kasseler Rippchen (smoked pork chops) and all the trimmings.

FORT WAYNE — The World Apostolate of Fatima, Diocese of Fort Wayne-South Bend division, would like to contact the families of children who are named Jacinta and Francisco.

As the world marks the 100th anniversary of the deaths of St. Jacinta and St. Francisco Marto, two of the three visionaries of Our Lady of Fatima, the local WAF chapter is considering ways to incorporate such children and families into its annual October Mass and breakfast in remembrance of the apparition.

The World Apostolate of Fatima is a public association of the faithful under the Pontifical Council for the Laity. Contact division president Theresa Schortgen at 260-749-6706 or [email protected]

PLYMOUTH — The Center at Donaldson, along with three other recipients, won the Partners in Clean Air Award Wednesday, April 24, at the Matterhorn Conference Center in Elkhart. The award is presented annually by MACOG Partners for Clean Air, which recognized The Center for its leadership in clean energy initiatives.

Michiana Area Council of Governments lauded The Center for implementing clean energy initiatives through the construction of green buildings, the use of electric vehicles, and charging infrastructure, among other sustainability efforts to promote clean air. After reducing electricity-related emissions by 15 percent through an LED lighting retrofit in 2017, The Center commissioned the first phase of a campuswide solar project in 2018 with 83 kilowatts of solar panels. The second phase will be installed this summer in both ground-mounted and rooftop systems, totaling 550 kW, equivalent to about 60 Hoosier households. The solar arrays power the transportation fleet as The Center transitions to electric vehicles. Early adopters of hybrid vehicles, The Center now has two plug-in hybrids and one fully electric vehicle. A public charging station allows guests, residents, and co-workers access to electric transportation as well. As a part of The Center, MoonTree Studios is a LEED Gold facility that features small-scale wind, solar, and native prairie landscaping.

Other area winners included Keystone RV of Elkhart, Habitat for Humanity of Mishawaka and South Bend Fire Department Station No. 4. 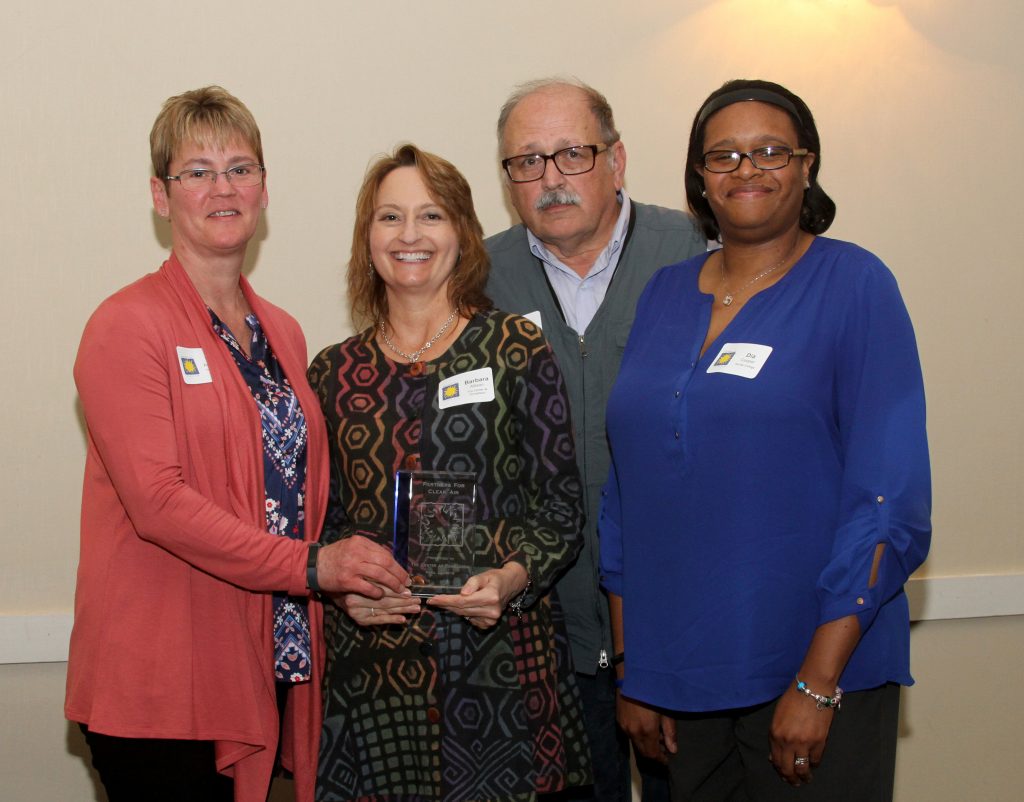