A Brush with God icon retreat

DONALDSON – Lindenwood Retreat and Conference Center welcomes back Father Peter Pearson, who will lead an icon workshop/retreat July 28 to Aug. 2. Check-in is at 4 p.m. EDT on Sunday, July 28, and checkout is 11 a.m. Friday, Aug. 2. This year, participants will write the icons “Mary of Egypt” and “St. Moses the Ethiopian.”

The cost of $675 includes tuition, all supplies, single accommodations and breakfast Monday-Friday. Scholarships are available. Commuter rate is $475.

Iconography dates back to the early days of Christianity. Religious icons are a form of prayer and are meant to make people aware that they are in the presence of God.

Lindenwood is a ministry of the Poor Handmaids of Jesus Christ and part of The Center at Donaldson, 9601 Union Rd., Plymouth.

INDIANAPOLIS — For those who wish their marriage was healthier and more fulfilling, Retrouvaille (pronounced “retro-vi,” with a long “i”) helps couples through difficult times and provides tools to strengthen and improve a marriage.

Beginning with a weekend followed by post-sessions, the program gives participants the opportunity to rediscover each other and examine their lives together in a new and positive way. They will learn to understand each other better and find each other again.

The program has helped tens of thousands of couples experiencing marital difficulty at all levels, including disillusionment and deep misery. Sign up for the Aug. 9-12 weekend at Saint Joseph Retreat and Conference Center, Tipton, and follow-up sessions at Our Lady of Fatima, Indianapolis: Visit www.helpourmarriage.org, email [email protected] or call 317-489-6811 for confidential registration information. Space is limited: Take a step toward healing today.

STEUBENVILLE, OHIO — The board of trustees of Franciscan University of Steubenville has elected Father David Pivonka, TOR, as the school’s seventh president. He succeeds Father Sean O. Sheridan, TOR, who has served as president since 2013.

Father Pivonka, born in Durango, Colorado, graduated with his B.A. in theology from Franciscan University in 1989 and went on to earn an M.Div. and M.A. in theology from the Washington Theological Union in 1996, writing his M.A. thesis on the indissolubility of Christian marriage.

He was ordained to the priesthood in 1996.

He earned a doctorate in education from the Graduate Theological Foundation in 2005, with a doctoral project focused on Catholic education in a post-modern world. He also earned an executive juris doctorate from Concord University School of Law of Purdue University Global in 2011.

At Franciscan University, Father Pivonka held a number of pastoral, leadership and administrative positions from 1996-2008. He also served on the faculty as an adjunct professor of theology. He worked as vice president for Mission and Planning, serving on the President’s Cabinet, leading a team of faculty, staff and students in strategic plan development, and building mission awareness on campus and off. In addition, he served as director of Household Support (1996-98), assistant to the president under Father Michael Scanlan, TOR, (1998-99), director of Youth Outreach Conferences (1999-2003) and director of the Study Abroad Program in Austria (2005-08).

From 2008-12, Father Pivonka served as director of post-novitiate formation for the Franciscans, TOR, in Washington, D.C., forming student friars in their spiritual, educational and psychological development. For the last seven years, he served as the director of Franciscan Pathways, an evangelistic outreach of his Franciscan TOR community.

Since 2008, he has served on the board of Renewal Ministries, and he is a past member of the board of trustees for Saint Francis University (2000-12) and a past board member for the National Service Committee.

Father Pivonka will assume the duties of president effective immediately. He will be formally installed during an inauguration ceremony that will be held later this year.

A press release issued by St. Joseph County Right to Life states: “With this ruling, Judge Evans Barker has completely undermined the state’s ability and right to regulate and license organizations doing business in Indiana. To put this in perspective, even our hair and nail salons and restaurants need to be licensed. Abortion is harmful for women and deadly for their babies. Abortion always ends an innocent life, and an unlicensed clinic will further endanger the health and safety of women.”

“WWHA is known for being a hostile community member and for ignoring regulations put in place for woman’s health and safety. I am frustrated by the judge’s decision and concerned for the women in our community,” said SJCRTL Executive Director Jackie Appleman.

In bypassing state procedures in place to protect the health and safety of women, WWHA “demonstrates a disregard for women’s health and reveals that their only interest is in selling abortions at any cost,” according to the release.

“Women need support, not abortion. St. Joseph County Right to Life is committed to continuing to connect women with the resources they need to be supported in their pregnancy and motherhood.

‘I challenge every South Bend resident to reject the lies and manipulation of the abortion industry and offer life-affirming support to their loved ones,’” said Appleman.

St. Joseph County Right to Life Inc. is dedicated to the social welfare by promoting life through outreach, education and advocacy.

It is the oldest, continuously active pro-life organization in St. Joseph County, and is the central organization representing pro-life interests. Its goal is to protect all human life, from fertilization to natural death. 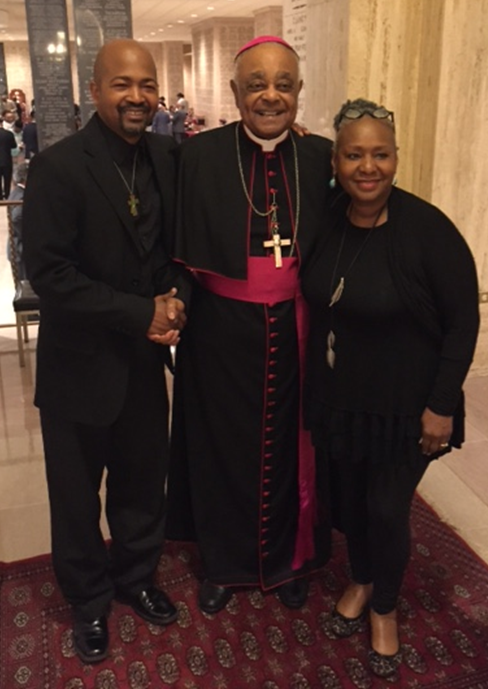 Provided by Annie Tardy
At a clergy luncheon prior to the installation of Archbishop Wilton D. Gregory as archbishop of the Diocese of Washington, on behalf of the National Black Catholic Clergy Caucus, president Deacon Mel Tardy of the Diocese of Fort Wayne-South Bend presented the archbishop with a special gift: a purple, Afrocentric chasuble and matching miter commissioned from member Father Melvin James of California. Pictured are Deacon Tardy and his wife, Annie, with the archbishop during the luncheon. 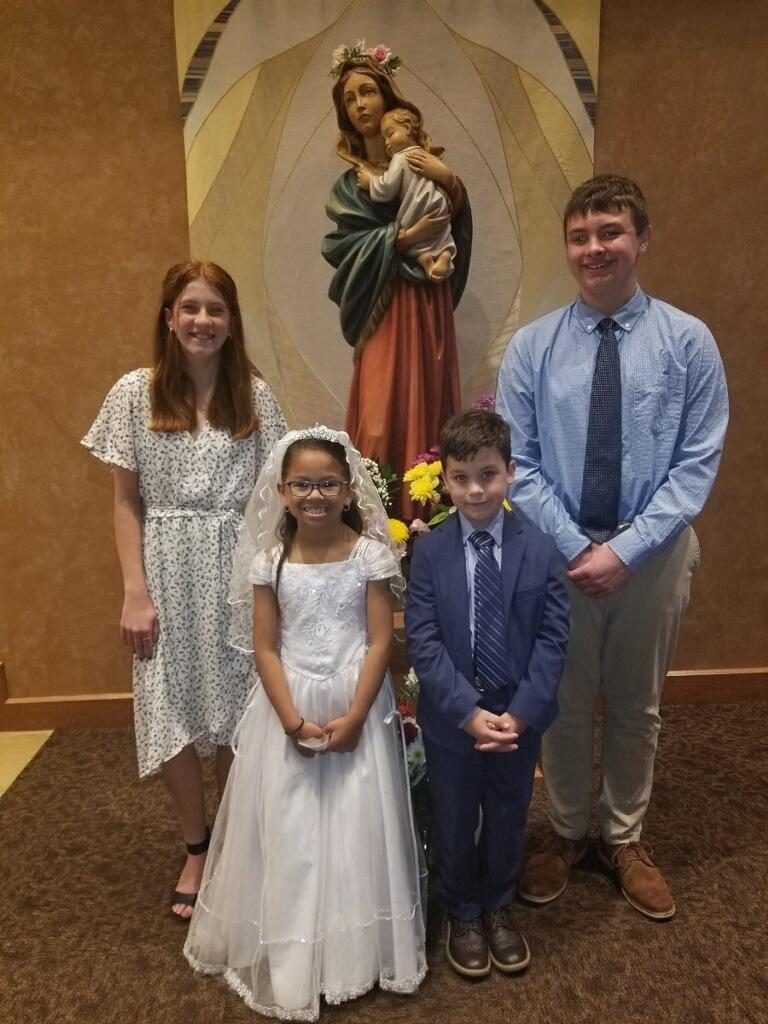 Provided by Lois Widner
St. Elizabeth Ann Seton School in Fort Wayne elected a May Crowning Court and conducted its annual May Crowning on May 24 to honor Mary. The court consisted of, from left, Ashley Nill, Sofia Fryar, Johnny Arnold and Owen Woolard. 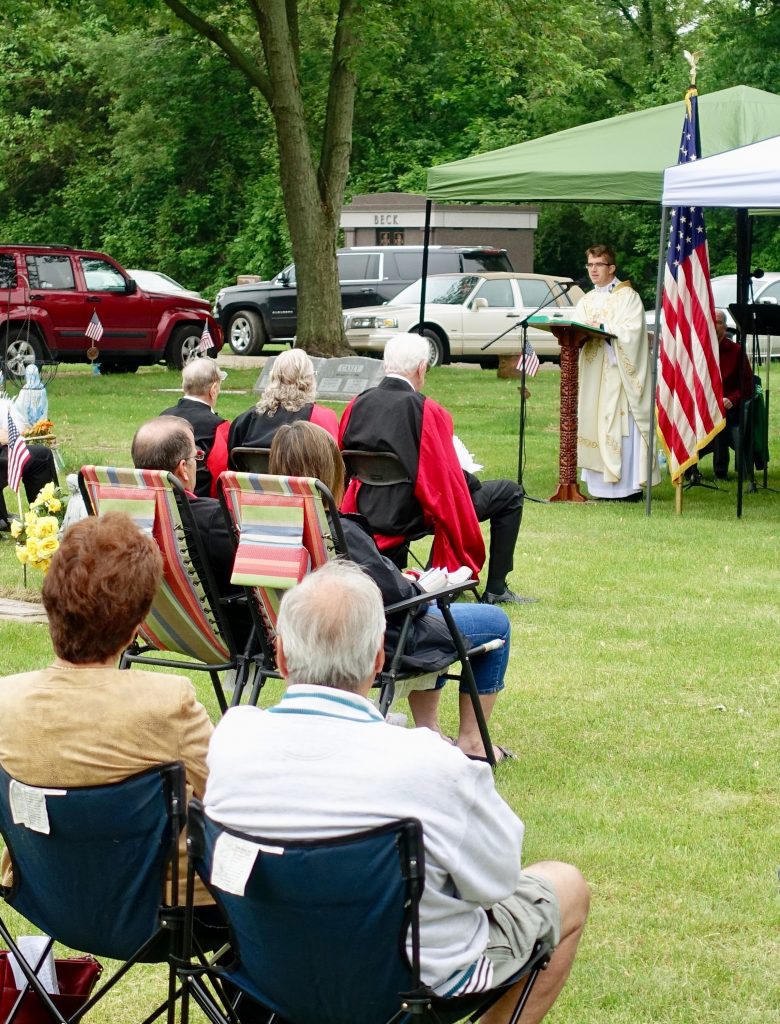 Jonathan Acierto
Parishioners of St. Vincent de Paul Parish in Elkhart gathered, along with veterans and a Knights of Columbus color guard, for a Mass in St. Vincent Cemetery on Memorial Day, May 27. Father Patrick Hake, parochial vicar, celebrated the Mass and recognized the veterans who were present.