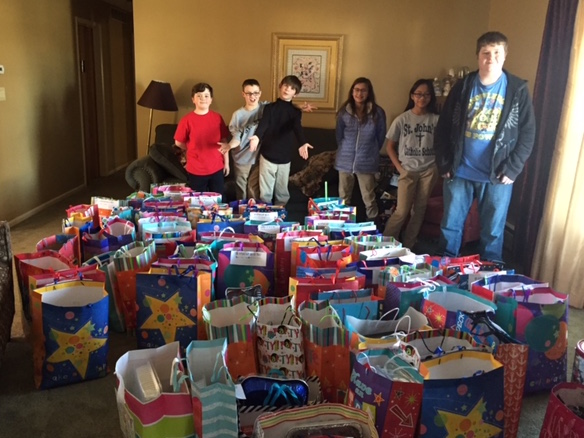 Was your mother a member of the Christ Child Society?

SOUTH BEND — In celebration of its 70th anniversary, the Christ Child Society of South Bend will be featured in an exhibit at The History Museum, located at 808 W. Washington St. near downtown South Bend. Photographs from 1947 and the following decades will be included, as well as the story of how the organization has served over 200,000 children.  The exhibit will open on Thursday, June 15, with a ribbon cutting during a reception and silent auction, and will continue throughout the summer.

Do you have memories of your mother making crafts for the Christmas Bazaar, knitting infant sweaters or volunteering every Wednesday at the clothing center?  If so, she is part of Christ Child Society history and may be pictured in the exhibit. Descendants of all past and current members are welcome to visit the exhibit and share in the celebration of clothing children for 70 years.

Principals of the Diocese of Fort Wayne-South Bend made possible a celebration luncheon for 23 administrative assistants on March 10 at the University of Saint Francis. Superintendent Marsha Jordan welcomed the group and personally thanked them for their service to education. Trois Hart, associate vice president at the university, was emcee of the event, which included a photo montage of students from the 16 schools represented at the luncheon. Kyle Heimann of Redeemer Radio entertained with stories of being a student, parent and now board member at a Catholic elementary school. “It takes very special talents to serve the Catholic community in this role. You are the anchor of the school, and everyone knows it,” stated Heimann. Everyone attending received a gift bag of items from USF and Today’s Catholic. — Provided by Trois Hart

To receive an invitation to the celebration on June 15, send your name and address to Megan at [email protected]

Provided by Kathy Retzios
Several residents of Saint Anne Communities in Fort Wayne baked, frosted, decorated and delivered 440 cookies to St. Mary’s Soup Kitchen two weeks ago for a St. Patrick’s Day treat. The Saint Anne Resident Council donates money to various charities, but this time several of the members decided to give the organization’s donation a personal touch. While the women were at the soup kitchen they toured the facility and the staff explained its mission. The participants said they considered it a wonderful experience and plan on doing similar service projects in the future.

SOUTH BEND — In his book, “Bored Again Catholic,” Timothy O’Malley, Notre Dame professor of theology, provides a lay primer for participating in the liturgy. He looks at each part of the Catholic Mass, from the entrance to the concluding rites, not only explaining the why and how but uncovering opportunities to employ “good boredom” in praying the Mass.

O’Malley will be at St. Thérèse, Little Flower Catholic Church, 54191 Ironwood Rd., at 7 p.m. April 18 to walk through and discuss, with examples from his book, every part of the Mass. The more one understands, the better the celebration of Mass can be. The public is welcome.

Father Gregory J. Boyle, SJ, founder and executive director of Homeboy Industries in Los Angeles, Calif., will receive the University of Notre Dame’s 2017 Laetare Medal — the oldest and most prestigious honor given to American Catholics — at Notre Dame’s 172nd University commencement ceremony on May 21.

“For nearly 30 years, Father Boyle has served men and women who have been incarcerated and involved with gangs, and, in doing so, has helped them to discover the strength and hope necessary to transform their lives,” said Notre Dame’s president, Rev. John I. Jenkins, CSC. “Father Boyle’s solidarity with our sisters and brothers at the margins of society offers an inspiring model of faith in action. We are grateful for the witness of his life and honored to bestow this award on him.”

Upon learning of the award, Father Boyle said, “You want a university to be in the world what you invite the world to become. Notre Dame is like that. It’s an honor to be recognized as the Laetare Medal recipient and I’m very grateful.” 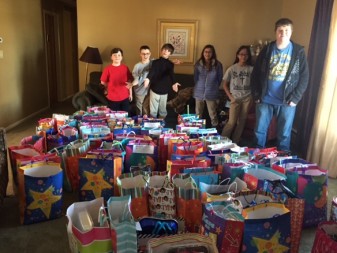 Provided by Janice Comito
The Destination Imagination Team of St. John the Baptist School, New Haven, competed at the regional level recently and won first place. The team also won a DaVinci Award for creativity. Participating students performed a skit and planned a service project, which was to make “Birthday Bags” — which included items to help a family celebrate a child’s birthday — for distribution to needy families. The team will compete at Destination Imagination state competition in April.

The Laetare Medal is so named because its recipient is announced each year in celebration of Laetare Sunday, the fourth Sunday in Lent on the church calendar. “Laetare,” the Latin word for “rejoice,” is the first word in the entrance antiphon of the Mass that Sunday, which ritually anticipates the celebration of Easter.

Established at Notre Dame in 1883, the Laetare Medal was conceived as an American counterpart of the Golden Rose, a papal honor that antedates the 11th century. The medal has been awarded annually at Notre Dame to a Catholic “whose genius has ennobled the arts and sciences, illustrated the ideals of the Church and enriched the heritage of humanity.”