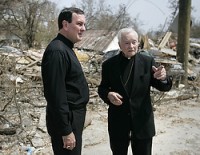 Retired Archbishop Philip M. Hannan of New Orleans gestures while talking with Bishop Thomas J. Rodi of Biloxi, Miss., after viewing a church damaged by Hurricane Katrina in 2005 in Biloxi, Miss. Archbishop Hannan, a World War II paratroop chaplain who befriended and secretly counseled John F. Kennedy during and after his historic run for the White House as the first U.S. Catholic president, died Sept. 29 at age 98. (CNS photo/Bob Roller)

“Archbishop Hannan in every way was a good shepherd of the church who was modeled after Christ, not just for Catholics of New Orleans but for the whole community,” Archbishop Gregory M. Aymond of New Orleans said in a statement.

“We will miss him, but at 98, he has lived a full life. We truly believe in faith that he will feast not just at table of the Eucharist but at the table of the Lord in heaven,” he said.

Archbishop Hannan had become increasingly frail in recent months because of a series of strokes and other health problems. He moved in June from his private residence in Covington, La., to Chateau de Notre Dame, a senior apartment complex and elder care facility he first envisioned and then dedicated in 1977 to provide for seniors in archdiocese.

“From the time Archbishop Hannan came here right after Hurricane Betsy in 1965, he truly made New Orleans his home,” Archbishop Aymond added. “This was his parish and his archdiocese, and it had no boundaries. He was there for anyone and everyone. That was his goal in life.

“He always quoted St. Paul, and he truly believed that his mission and ministry was to preach the Gospel untiringly both in actions and in words.”

Archbishop Aymond will receive the body of the late archbishop at 5 p.m. Oct. 3 at the Notre Dame Seminary Chapel. A special evening of prayer will be celebrated by the priests of the archdiocese, followed by a wake service and public viewing. Public viewing will take place at the chapel all day Oct. 4 and until noon Oct. 5, when a horse drawn procession will take the body of Archbishop Hannan to St. Louis Cathedral. Public viewing will be held at the cathedral.

Archbishop Aymond will celebrate a funeral Mass for Archbishop Hannan Oct. 6 at the cathedral, followed by his burial in a crypt beneath the sanctuary.

Archbishop Hannan was the third-oldest U.S. bishop, after Archbishop Peter L. Gerety of Newark, N.J., who turned 99 July 19, and Auxiliary Bishop Bernard J. McLaughlin of Buffalo, N.Y., who will turn 99 Nov. 19. He was one of the two last surviving U.S. bishops to have attended all four sessions of the Second Vatican Council (1962-65) as a bishop. The other is retired Archbishop Raymond G. Hunthausen of Seattle, who is 90 years old.

A staunch defender of civil rights and the unborn as well as a fierce proponent during Vatican II of the morality of nuclear deterrence, Archbishop Hannan burnished his reputation for fearlessness in 2005 by riding out Hurricane Katrina alone at age 92 in the fortresslike studios of Focus Worldwide, an offshoot of the television network he created in the 1980s.

Although the building’s backup generator failed, the veteran 82nd Airborne chaplain had a ready supply of water, peanut butter and crackers — as well as a trusty 3-wood to ward off potential looters. Five days later, he talked his way through police barricades and drove across the 24-mile causeway bridge over Lake Pontchartrain to give emotional pep talks to weary first responders.

Never the master of understatement, he called it “the easiest drive of my life.”

He was ordained auxiliary bishop of Washington in 1956 and was attending the final session of Vatican II — with the responsibility, because of his background as a Catholic newspaper editor, of coordinating the daily press briefings for English-speaking reporters — when Pope Paul VI appointed him as the 11th archbishop of New Orleans Sept. 29, 1965.

The appointment came 20 days after Hurricane Betsy had flooded and damaged large swaths of New Orleans.

As archbishop, he endeared himself to a Catholic populace that could be wary of outsiders through his plain talk against abortion — which drew the ire of Catholic politicians who supported keeping abortion legal — and through his outreach to the poor, the elderly and those of other faiths.

In 2010, Archbishop Hannan published his memoirs, “The Archbishop Wore Combat Boots,” which documented his career as a seminarian in Rome in the 1930s during the buildup to World War II, his service as a paratroop chaplain for the 82nd Airborne and his confidential relationship with Kennedy when he was an auxiliary bishop of Washington.

Archbishop Hannan and Kennedy were so close that first lady Jacqueline Kennedy asked him to deliver the eulogy at the assassinated president’s funeral Mass on Nov. 25, 1963, at St. Matthew Cathedral in Washington. According to church protocol, that responsibility normally would have fallen to Washington Archbishop Patrick O’Boyle, who graciously allowed his auxiliary to deliver the eulogy.

In 1968, Archbishop Hannan returned to Washington from New Orleans to deliver the graveside eulogy at the funeral of Sen. Robert F. Kennedy. In 1994, he offered graveside prayers at the interment of Jacqueline Kennedy Onassis in Arlington National Cemetery.

Archbishop Hannan retired one year after the historic 1987 visit of Pope John Paul II to New Orleans, an event he often called the highlight of his life as a priest.

Archbishop Hannan started educational television station WLAE in the 1980s and was still filing television reports as late as Hurricane Katrina in 2005. One week after the storm, when an Army helicopter carrying Archbishop Paul Cordes, the papal envoy, and several other bishops landed in a field in Biloxi, Miss., Archbishop Hannan — along with his cameraman — was waiting for them to conduct interviews for his TV show.

Born in Washington May 20, 1913, Archbishop Hannan was the fifth of eight children. His father, an Irish immigrant, came to the United States at 18 and found work as a plumber, building his trade into a flourishing business that weathered even the Great Depression.

A leader in both scholastic work and sports activities, young Philip captained the winning cadet company his senior year at St. John’s College High School in Washington. As graduation approached, he startled his family by announcing that instead of taking the test for the U.S. Military Academy at West Point, he would enter the seminary.

He attended St. Charles College in Catonville, Md., and the Sulpician Seminary in Washington, receiving a master’s degree from The Catholic University of America before going in 1936 to the Pontifical North American College in Rome, where he experienced firsthand the growing tensions in Europe and the preparations for World War II.

He earned a licentiate in theology from the Pontifical Gregorian University in Rome and later earned a doctorate in canon law from Catholic University.

Ordained in Rome Dec. 8, 1939, by Bishop Ralph Hayes of Davenport, Iowa, then rector of the North American College, Father Hannan remained in Rome until the following summer, when all American seminarians were ordered by the U.S. secretary of state to leave to ensure their personal safety. He celebrated his first Mass in the United States June 16, 1940, at St. Matthew Cathedral in Washington.

He then served as assistant pastor for two years at St. Thomas Aquinas Church in Baltimore.

In 1942, he volunteered as a wartime paratroop chaplain and served with the 505th Parachute Regiment of the 82nd Airborne Division. After cursory instructions on the ground, he took five practice jumps to earn his official status as a paratroop chaplain.

After his first jump, he was appointed “jump master” to a small crew of greenhorn jumpers and he affectionately became known as “The Jumping Padre.”

In 1945, as the horrors of Nazi prisoner-of-war camps became widely known, Chaplain Hannan liberated a German camp of emaciated prisoners at Wobbelin.

After the war, Father Hannan was assistant pastor at St. Mary’s Church in Washington. In 1948 he was appointed vice chancellor of the newly established Archdiocese of Washington. In 1951 he helped organize the Catholic Standard, the archdiocesan newspaper, and was its editor-in-chief for the next 14 years.

“We mourn the loss of Archbishop Hannan, our founding editor and founding father, a great man who served his church and his country with honor and faith,” Mark Zimmermann, editor of the Catholic Standard, said in a statement.

Named a bishop by Pope Pius XII, he was ordained Aug. 28, 1956, in St. Matthew Cathedral. In 1962 Bishop Hannan went to Rome for the first session of Vatican II.

During the second and third sessions of the Vatican Council, Bishop Hannan addressed the council fathers twice, during the session on the role of the laity and the session nuclear warfare. The latter address persuaded the council to accept the morality of nuclear deterrence.

In New Orleans, one area in which Archbishop Hannan had the greatest impact on the community was social work. Shortly after his arrival, he walked the streets of a housing development and immediately determined the church needed to institute a social action program.

Beginning in the summer of 1966, with only 25 volunteers, the archdiocesan Social Apostolate program developed into a year-round activity at nearly a dozen centers, focusing on educational, recreational, cultural and social activities.

When the city’s public swimming pools developed mysterious problems — meaning they could not be opened for blacks and whites to swim together — the archbishop decided to make the swimming pool at Notre Dame Seminary available to the children who attended his Summer Witness camps. Archbishop Hannan said he received some negative attention from whites but paid it no attention.

The archbishop was successful in bringing to New Orleans the Second Harvest Food Bank program, and the Elderly Supplemental Food Program.

Following the fall of South Vietnam in 1975, the Archdiocese of New Orleans, through Catholic Charities, was one of the leaders in the nation assisting in the resettlement of thousands of Vietnamese refugees.

In the conclusion of his autobiography, Archbishop Hannan wrote: “The road to heaven begins — and ends — with faith in God from whom all blessings, wisdom, tolerance, joy and forgiveness have always — and will ever — flow. Consequently, I have come to believe that only when we actually get to heaven will we truly understand what we accomplished here on earth — especially when it concerns the priesthood.

“From my perspective as a priest — I will accomplish in death what I could not in life because as priests we are most fully alive when we die,” he wrote. “If we don’t feel that way, we certainly have not served the cause of Christ as we were meant to. In the final spiritual analysis, to fulfill the will of God, a priest must die in life as did his own Son. And when that times comes, with the grace of God, I am ready.”