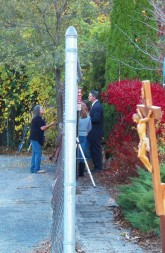 Shawn Sullivan, director of the Apostolate of Divine Mercy, and Ellen Master evangelize through the fence surrounding the former South Bend clinic of an abortion doctor. Rain, shine or sub-zero temperature, day-in and day-out, prayer and evangelization at the location was a focus of the apostolate until the abortionist’s license was revoked last year.

For over four years, the mission of the Apostolate of Divine Mercy in Service of Life, Marriage and the Family, has been to mitigate the despair of mothers who feel they are being forced to have an abortion because of their situation or some other factor.

In the scenarios where a woman feels she is being forced or pressured, volunteers with the apostolate are there for her by doing everything they can to care for her health and safety.

“Is there any assistance we can give you to help you through this pregnancy, such as legal, financial, medical, shelter or domestic violence protection?” said Shawn Sullivan, director of the Apostolate of Divine Mercy, posing the initial questions to which volunteers attempt to discern answers by talking with the women. “We care about you and want to help you, no strings attached.”

The apostolate also takes to the streets in order to provide facts about Planned Parenthood, whether that’s to the general public or those in attendance at pro-abortion gatherings. For example, along with the Franciscan Brothers Minor, members of the apostolate attended a rally last year in downtown South Bend held by Pro-Choice Michiana, during which they reached out to rally participants to discuss abortion-related issues.

Sullivan said 2016 was a year of huge successes for the Apostolate of Divine Mercy and the Diocese of Fort Wayne-South Bend.

“Obviously, the biggest was zero abortions. We went from 3,315 abortions along the I-90 Corridor — three of the facilities being Dr. Klopfer’s — to zero, and Dr. Klopfer lost his license. We were gratified by the fact that the state authorities accepted and relied upon the evidence we supplied when finally shutting down the abortion clinic and (his) medical license.”

Dr. Ulrich Klopfer was known as a long-time abortionist whose medical license was taken away after he was found guilty of five charges made by the Indiana Attorney General’s office, including failure to report abortions performed on children under that age of 14. 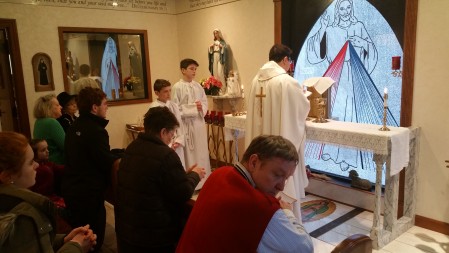 With the Apostolate of Divine Mercy’s spirituality and intellect being guided by St. John Paul II’s writings on the Eucharist, Mass and Adoration are the source and summit of its mission. Pictured is Father Bruno Shah, OP, celebrating the apostolate’s first Mass of 2017, for the success of its ministries.

Additionally, during a Sept. 4 prayer service at the apostolate’s headquarters in South Bend, Bishop Kevin C. Rhoades entrusted the Apostolate of Divine Mercy to someone very special.

“On this beautiful day in the life of the church, the day of Mother Teresa’s canonization as a saint, I wish to entrust this Apostolate of Divine Mercy to the care and intercession of St. Teresa of Calcutta,” he said. “The work you do is a work of charity and mercy. I pray that Mother Teresa will inspire you to serve Jesus in the poor and the vulnerable, including the most vulnerable in our society, the innocent unborn.” 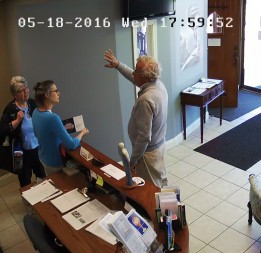 Dr. Ulrich Klopfer, a physician who performed abortions in several Northern Indiana cities for years, talks with Apostolate of Divine Mercy volunteers inside the lobby of The Life Center, the apostolate’s headquarters.

If anyone feels called or has a heart for the type of work being done at the Apostolate of Divine Mercy, volunteers are accepted. The ministry is in constant need of people to help run its offices, fundraise and provide programs, as is comprised entirely of “volunteers for God.”

“We always like to say that the ‘messy’ work of the apostolate is not for everyone,” said Sullivan. “It can be downright depressing and frustrating at times. But everyone can support the apostolate in some way. We have programs with costs and mothers and families with needs. (But) we don’t have any overhead, so donations are going into the building or out into the streets.”