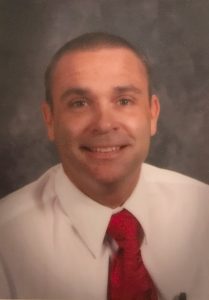 Beginning this upcoming school year, Andy Adams will serve as the principal of St. Mary of the Assumption School in Avilla.

“I am happy beyond words to introduce myself as the new principal of St. Mary Catholic School. … I feel honored and privileged to be part of the Fort Wayne-South Bend diocese,” he said.
Adams considers his new job as principal of St. Mary to be a service role and a way to give to the school community.

“I am very thankful to have the opportunity to (be) part of this family, bring my experiences to St. Mary Catholic School and to lead through service,” he said.

He describes his leadership strategy as “collaborative” and “decentered.” He enjoys leading in an environment that values teamwork and he very much sees the importance of gaining the perspectives of others.
Growing up, Adams attended Queen of Angels School in Fort Wayne. He went on to attend North Side High School and then the University of Saint Francis.

Later, he returned to school to earn advanced degrees. Over the past several years he has completed his Ed.S. and Ed.D. in educational leadership through Indiana University’s School of Education, while working in the Fort Wayne area. He said he chose the program because of its focus on collaborative-based and team-centered leadership. He is currently working on his dissertation, which concentrates on safety as it relates to children and educational environments. Adams also received his administrative license through Indiana University.

During his career, Adams worked for 11 years in East Allen County Schools and four years in North Adams Community Schools.

Heading into 2017-18 school year, Adams plans to concentrate on working to form students comprehensively. For him, it is important that students have quality experiences to support well-rounded growth.
“The goal throughout my career has been to be a child advocate and to support growth: spiritually, emotionally, behaviorally, (and) academically,” he explained. “To this end, I will work incessantly to ensure children have the best possible experiences while in attendance at St. Mary Catholic School.”

Though the school year has yet to officially start, Adams has already experienced firsthand the close-knit and supportive nature of St. Mary.

“St. Mary’s has been one of the most welcoming communities that I’ve ever been a part of,” he said. “Everyone has been so kind during my transition.”

Classes at St. Mary officially begin on Aug. 8. Adams will welcome the staff back for a retreat on Aug. 3.