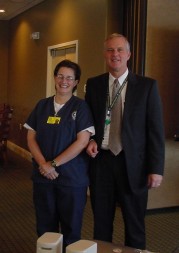 PLYMOUTH — Todd Zeltwanger, executive director of Institutional Advancement at Ancilla College, spoke on intergenerational living and learning and the new facilities being built for housing at Ancilla College, Donaldson. Zeltwanger was the speaker at the Oct. 25 fall luncheon of the Red Hat Rockettes at the Plymouth Country Club.

Zeltwanger provided a brief history of the Poor Handmaids of Jesus Christ, who operate Ancilla College. The sisters first came from Germany to Hessen Cassel in the Diocese of Fort Wayne on Aug. 15, 1851.

The PHJC is an international congregational of apostolic women religious within the Roman Catholic Church. They minister to the poor, the sick and to children in the U.S., Mexico, Germany, England, the Netherlands, India, Brazil, Kenya and Nigeria.

With prayer and community living as their foundation, they minister in rural, urban and inner-city settings in the Midwest.

Focused on partnering in the work of the Spirit, they invite others to join them in various facets of education, pastoral and social work, neighborhood-based health ministries, spiritual guidance and care for the environment.

However, the Poor Handmaids are recognized more by the love and simplicity with which they serve than by any particular ministry.

Future plans include pursuing enrollment goals beyond the territory outside of the historical 45-mile radius, expanding the intergenerational living and learning center that already exists by building the Ancilla College Commons and an Assisted Living Pavilion for the Catherine Kasper Life Center (56 residential apartments).

Student housing will consist of a number of two-floor cottages (32 students per cottage) at the corner of Upas and 9B.

Zeltwanger emphasized that “intergenerational” is the key word — people of all ages interacting, sharing, learning and growing together.

“Imagine,” he said, “young adults interacting with and learning from their peers and their elders. Imagine also mature men and women living and learning together with bright, creative college-age students in an atmosphere of mutual respect and understanding.

“Live and learn together,” he said, “in a partnership on Union Road.”

Kristy Rupert, a senior nursing student, spoke briefly about how she is privileged to be working with the Ancilla program.