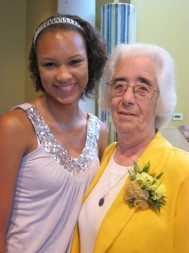 At left Annie Johnson, 15, poses with her godmother Holy Cross Sister Susan Kintzele, a 71-year-old Sister of the Holy Cross who recently celebrated her 50th jubilee at the Church of Our Lady of Loretto at Saint Mary’s, Notre Dame. Sister Sue and Annie have been together since Annie was one month old.

By May Lee Johnson

SOUTH BEND — To those who don’t know them, they appear to be an unlikely pair.

A religious sister, Holy Cross Sister Susan Kintzele, known as Sister Sue, and the 15-year-old St. Joseph High School sophomore, Annie Johnson, have a bond like no other.

They are godmother and goddaughter, sometimes good friends and other times not so friendly, but they have a fierce love for each other. Sister Sue helped raise Annie from her infancy.

Recently Sister Sue celebrated a special milestone — her 50th jubilee at Our Lady of Loretto Church, where she was surrounded by her sister Sally, her family and, as always, her goddaughter Annie. The two special friends again renewed their friendship.

Sister Sue is a Michigan City native, and hadn’t planned on a vocation in religious life. It was her sister, Sally Ankony, who sent away for the information on vocations. Sally is now a retired magistrate in LaPorte County.

After her first year at Saint Mary’s College, Sister Sue answered the call to religious life. She became a member of the Sisters of Holy Cross in 1962. And for over 35 years she has ministered to inmates at the area jail as a bail bond person.

Sister Sue, who lives on the Saint Mary’s College campus, helps inmates with financial means to post bond that gives them the opportunity to leave the St. Joseph County Jail until their trial dates. She doesn’t have to advertise because her number is written on the wall at the county jail.

“I can’t be of much help to anyone who has been arrested for a serious crime anyway,” she says, “partly because their bonds are too high for me to be of much assistance.”

She interviews each prospective recipient. “I go to the jail two or three times a week and talk to three to five people each visit,” she says. “I usually am only able to help a few people over a week’s time.”

She can also be seen dropping the young men off at their family’s homes once they have been released.

“Sister Sue is one of a kind,” said Minnie Wells, of South Bend. “She is honest and forward and those boys know her by name and face. They respect her when they won’t respect anybody else. And trust me, that is something special.”

While her bail bond ministry is important, back in 1996 an unexpected little person, Annie, came into her life and they have bonded for life. Annie can bring a smile to Sister Sue’s sometimes stern face.

“Sister is like my mother and she bosses me around,” said Annie. “I’m glad she is in my life. …  Now at age 15 I love her but sometimes I don’t like her ways,” Annie said laughing.

Sister Sue remembers the day the she first set eyes on Annie.

“She was so cute and her head was bald,” said Sister Sue. “I don’t remember what attracted me to her, but I knew I wanted to help her be the best she could. What is special about her is that she means so much to so many. I call her ‘the village child,’ because so many have had a hand in rearing her. All I ever wanted to do was show her different places and things, and I have been able to do that for her. She is growing up to be a wonderful young woman.”