VATICAN CITY (CNS) — Sometimes the Catholic Church has “proposed a far too abstract and almost artificial theological ideal of marriage, far removed from the concrete situations and practical possibilities of real families,” Pope Francis wrote in his 2016 exhortation, “Amoris Laetitia.”

And too often, people thought that because the Church had an ideal for the family, it meant the Church was for ideal families only.

“Of course, there aren’t any perfect families, and Pope Francis says this in effect in ‘Amoris Laetitia.’ The reality of a man and a woman is an imperfect reality, but they can perfect themselves with the sacrament of marriage, with the grace of the sacrament,” said Gabriella Gambino, undersecretary of the Dicastery for Laity, the Family and Life.

“Marriage is a vocation; it is a path of holiness, which is perfected day by day,” she told Catholic News Service April 21. 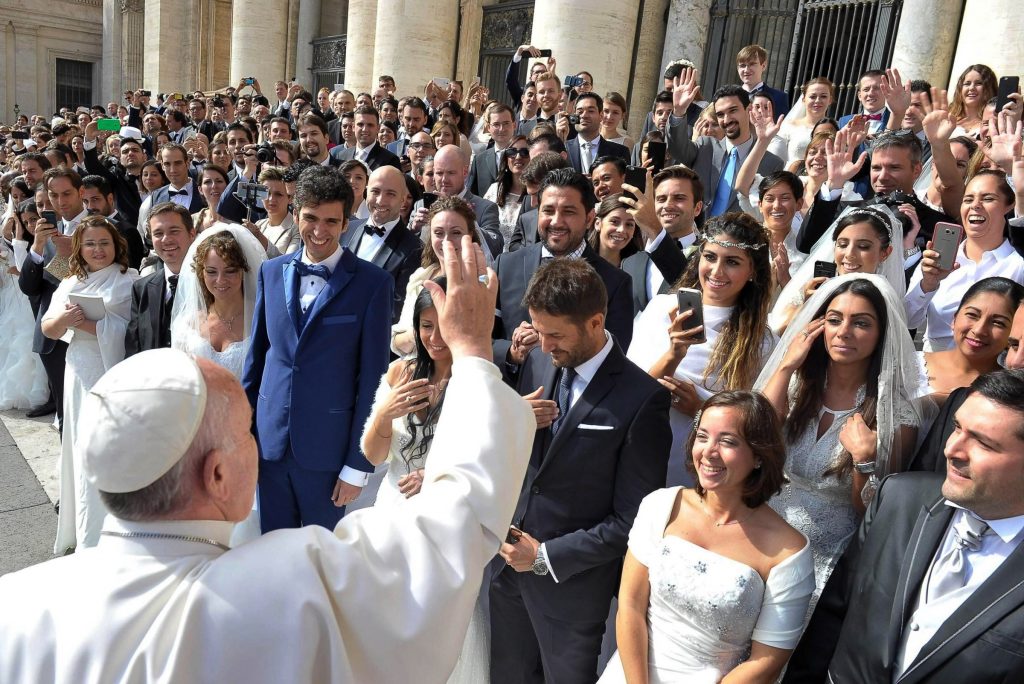 Pope Francis greets newly married couples during his general audience in St. Peter’s Square at the Vatican in this Sept. 30, 2015, file photo. The “Amoris Laetitia” Family Year, which opened March 19, is an opportunity for Catholics to read Pope Francis’ 2016 document and discover its reflections on family life. (CNS photo/Vatican Media)

Pope Francis opened the “Amoris Laetitia” Family Year March 19, encouraging people to read the document, strengthen their families and support other families who may be struggling.

Gregory K. Hillis, a professor of theology at Bellarmine University in Louisville, Kentucky, has been posting tweets about his marriage and family life with the hashtag #AmorisLaetitia almost since the document was published.

Often the tweets are humorous, like from Palm Sunday 2017: “It took a mere 10 seconds for my children to begin using their palm leaves as swords this morning. #AmorisLaetitia.” And, shortly after Easter this year: “Discount Easter candy purchased. Now to hide it from the kids #AmorisLaetitia.”

“The tweets are a way for me to highlight that ‘Amoris Laetitia’ is so much more than just about the issue of divorce and remarriage,” the issue that attracted the most media coverage, he told CNS. “It is about the nitty-gritty of family life in a way that truly spoke to me as a father and husband.”

With the tweets, “just like ‘Amoris Laetitia,’ I wanted to be honest about both the humorous and less-than-humorous aspects of family life,” he said.

“’Amoris Laetitia’ spoke about families honestly and openly, and in a way that was refreshing,” Hillis said. “The ideal is there, but the messy reality is also clearly recognized and honored.”

The coronavirus pandemic and its various lockdowns and periods of working from home and attending class virtually have put added stress on families, but also underlined just how essential family relationships are to health, happiness and survival.

Gambino and her husband have five children: a 23-year-old university student, an 18-year-old and 12-year-old triplets. They were all together, in the same apartment, during Italy’s severe lockdown in March-May 2020.

The children attended school online and both she and her husband were working from home, but they did not have seven computers or even seven devices. The Wi-Fi would slow down and crash and, at the end of the day, all seven of them would be screen zombies.

“Like everyone, we were unprepared for this long period of living together without leaving the house” except to go grocery shopping, she said. “We all had to have a lot of patience.”

“But looking back, it really was a strong moment of learning for both of us as parents and for our children. We had to learn how to be generous, for example, in sharing computers” and everyday chores, which grew with everyone home for every meal — “all seven of us there for breakfast, lunch and dinner!” 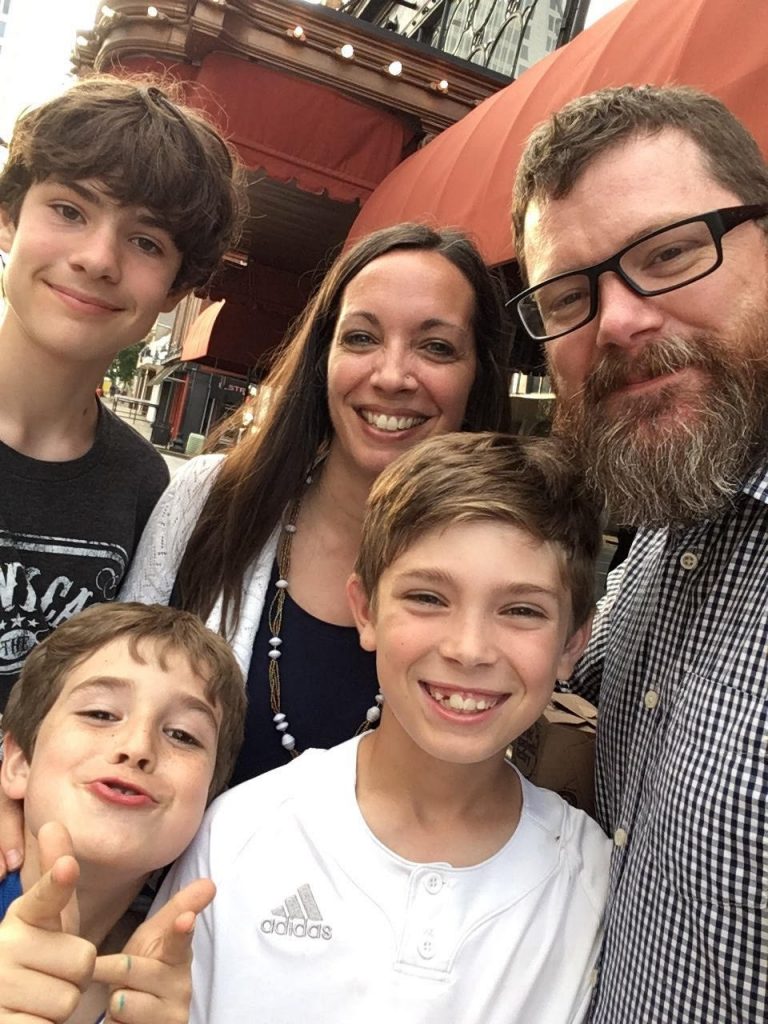 Gregory K. Hillis, a professor of theology at Bellarmine University in Louisville, Kentucky, takes a selfie with his wife, Kim, and their sons Isaac, Leo and Sam. Hillis spoke with Catholic News Service about the “Amoris Laetitia” Family Year, which opened March 19. The year is an opportunity for Catholics to read Pope Francis’ 2016 document and discover its reflections on family life. (CNS photo/courtesy of Gregory K. Hillis)

The triplets became “exceptional cooks,” she said. But as a mom, “at the beginning I had to learn to close my eyes” to the mess they created. “Now, instead, they have become very good, because I explained to them the greatest cooks leave the kitchen clean!”

The children understood the challenges of lockdown, she said, “but also the opportunity that it gave us to all be together and dialogue and play.”

And, with two widowed grandparents living on their own, the children also stepped up to ease their loneliness, making sure they received a phone call from at least one grandchild every day.

In “Amoris Laetitia,” Hillis said, Pope Francis wrote repeatedly about “manifesting generous love as parents and spouses, and this pandemic year has challenged me to live out this calling to generous love more than ever before — not always, or even often, successfully.”

The pandemic period has been “a year characterized by disorder and anxiety, but it’s also been a year when we’ve come together as a family and spent more time together than ever before,” he said. “That came with challenges, but it also came with tremendous grace.”

Another lockdown discovery that Gambino and her husband are committed to continuing is “building community with other couples,” something that began with friends on Zoom, not just as a “pastoral” exercise but as an opportunity to chat and to share.

“We discovered how vital it is to build a community with other families, especially when you are experiencing difficulties or going through a tough time,” she said. “Talking with other families, sharing those challenges and ideas for dealing with them — it was a real breath of fresh air. This must continue through the parish.”

Priests around the world showed concern for families by celebrating liturgies online, organizing Zoom meetings and sending family prayer suggestions to parishioners’ homes, she said. But many of them also need to learn to welcome families as leaders in the outreach to other families — “to embrace ‘family’ as an ecclesial style” — with everyone pitching in, celebrating their different talents and caring for people in need.

“On this, there is still work to be done,” Gambino said, because for so long, the priest was seen as the guide and he tried to “drag” everyone else along.

The “Amoris Laetitia” Family Year, she said, should help Catholics discover that the pope’s document is about real families and has suggestions for how all Catholic families can be witnesses of the joy and beauty of marriage and family life — challenges and all.