WASHINGTON (CNS) — Lent is a penitent season — a time for sincere reflection on one’s mistakes and a time to make amends for one’s life before the joy of the Easter season.

And some say that the Catholic bishops need to be compelled by the laity during this season into recognizing their own faults especially in light of addressing the sex abuse crisis and questions about the results of the Vatican’s recent summit on the issue.

In a time of anger and frustration, some Catholics might be tempted to withhold donations to the Church — especially when urged to do so in a recent column by Marc Thiessen in The Washington Post. But others say that taking that kind of action will only hurt those the Church helps most.

In a March 8 letter to the editor responding to Thiessen’s March 6 column, Kathleen Swanson of Highland, Maryland, said a boycott “might sound like a great way to send a message by those who rightly want to see the Catholic Church finally deal with the issue of sexual abuse and harassment.” 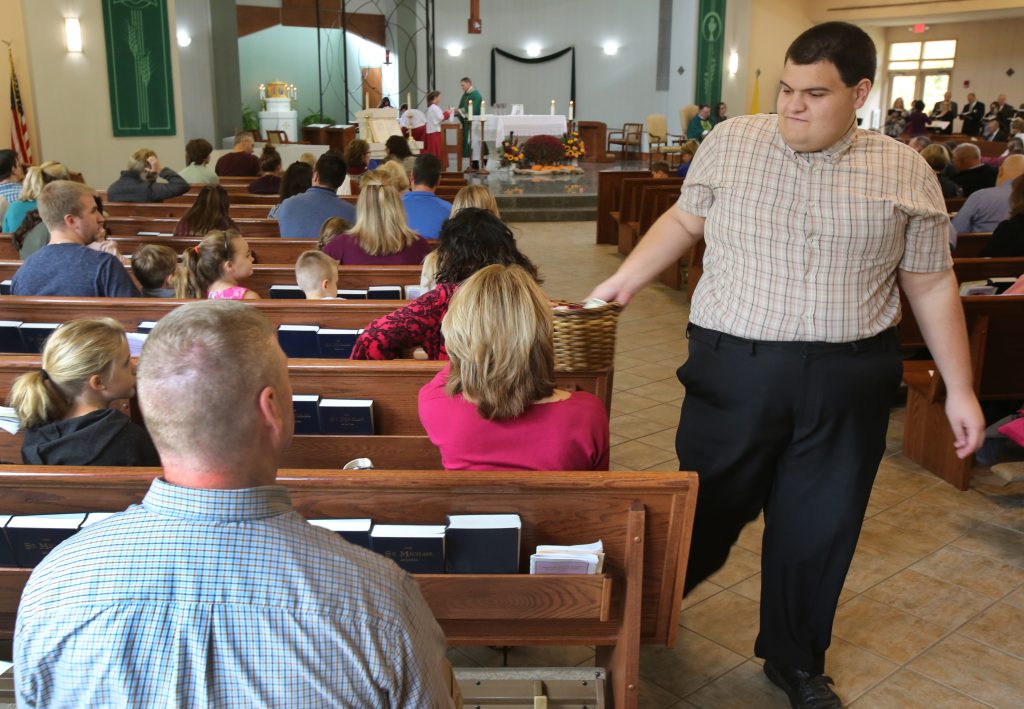 An usher hands the collection basket to a Massgoer Oct. 28, 2018, at Jesus the Divine Word Church in Huntingtown, Md. (CNS photo/Bob Roller)

But, she asked, “whom would it really be sending a message to? The thousands of children from our poorest communities who seek a way out of poverty through the Catholic education heavily subsidized by the Church and generous donors? The poorest parishes and schools that receive much-needed subsidies from their dioceses to continue operating in the neighborhoods they anchor as beacons of hope and opportunity?”

“As a former employee of a diocese whose job was to work with poor inner-city parishes,” she said, “I know firsthand that many Catholic dioceses operate close to the margin,” and if the annual appeal fails, she added, “networks of vital ministries and services also fail, with real-life consequences.”

In his column, Thiessen, a fellow with the American Enterprise Institute and a former speechwriter for President George W. Bush, wrote: “My advice to my fellow Catholics? Don’t give them a dime.”

After reeling off a list what he said were the bishops’ failures in handling the crisis, including serious missteps surrounding the scandal involving former Cardinal Theodore E. McCarrick, who was recently laicized, Thiessen admits he does not take his own words lightly, saying: “I offer this advice with a heavy heart, because I remain, and always will remain, a faithful Catholic.”

But he wants accountability and sees a boycott as possibly the only way for the Church to grow out of this ongoing dark chapter: “They covered up or ignored sexual misconduct and moved around predator priests — and continue to do so.”

In a phone interview with CNS, Thiessen stood by his position: “Because it’s not a democracy, the bishops are not accountable … the only way to get through to them is to withhold our money.” He’s glad that the Church isn’t run by popular opinion, he said, but thinks that squeezing the bishops financially might awaken them on this issue.

“If the poor are hurt (by withholding funds),” Thiessen said, “the bishops need to look to themselves” and figure out what should be done to reinstate stability and trust. “There are other sources of funds they can tap into” to keep the Church’s good works going, he added.

Disagreeing with Thiessen is the president of the Catholic League for Religious and Civil Rights, Bill Donohue, who told CNS that Thiessen’s point, while well made, fails to take into account the progress that the Church has made with regard to the abuse scandal, let alone the limits to the scandal itself.

“He gives the reader no idea that the crisis in this country has been licked,” Donohue said, noting that Georgetown University studies commissioned by the bishops have revealed allegations against clergy to be dropping starkly for over two decades.

Donohue said the expose on priestly sex abuse done in 2002 by The Boston Globe accurately revealed that the crisis was largely confined to priests who were ordained during the social throes of the 1960s.

“The damage was done to the Church during the sexual revolution,” Donohue said. “The way (Thiessen’s) article is written … suggests that we are stuck in the same time warp.”

In closing, Donohue noted that the anger of Catholics over the scandal and allegations of a cover-up are well deserved, but withholding funds is not the right way to go because it holds bishops to account for a crisis that is long in the past: “A lot of the priests who were delinquent … they’re either out of ministry or dead. … If we give off the idea that we have not made progress, that is simply wrong.”

Mark Zimmermann, editor of the Catholic Standard, newspaper of the Washington archdiocese, said in a blog post he thought Thiessen’s call for Catholics to boycott diocesan appeals “could not be more wrong.”

“(This) would ultimately hurt not the bishops — whom the writer seems to want to bring to their knees not in prayer but in shame — but would instead harm the Church’s outreach to those in need and undermine its everyday ministries to people.”

Zimmermann said he understands the “righteous anger felt by the faithful over the abuse crisis and the church’s response to it.” “As a fellow Catholic, I share that anger and sorrow,” he said, pointing out that the people of the Archdiocese of Washington have had “the heart-rending dimension of having our former cardinal archbishop … found guilty by the Church of sexual abuse and misconduct and stripped of his priesthood.”

He said Catholics “need to help rebuild the Church” and support “its foundation of good work” through annual appeals that in turn support outreach programs and ministries that “are needed now more than ever.”

Cardinal Daniel N. DiNardo of Galveston-Houston, president of the U.S. Conference of Catholic Bishops, has acknowledged the anger among laity over the abuse crisis. Bishops, particularly younger ones, he said, share in that anger and “want to move with real force” toward solutions, which he said could yield a new season for the Church.

He made the comments at a conference in early February at The Catholic University of America in Washington.

After the Vatican’s Feb. 21-24 summit on child protection and the clerical sexual abuse crisis, which he attended as USCCB president, he said the proceedings affirmed the U.S. bishops’ strong belief that bishops and cardinals who abuse children or cover up abuse must be held accountable.