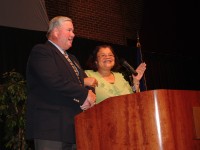 In a gesture of solidarity from the Civil Rights Movement Dr. Alveda King clasps arms with the St. Joseph County Right to Life dinner master of ceremonies Bob Nagle, and she leads attendees in song.

SOUTH BEND — Her life has been a rough road that finally smoothed out. Her home was bombed by the Ku Klux Klan when she and her family were inside. She was jailed during the Civil Rights campaign for open housing. Her father’s church was bombed. Her uncle was assassinated and her father was found dead in the family swimming pool. His death was ruled accidental but she maintains that he was murdered, too. She had two abortions and was divorced. In 1983 she was “born again” and has become an ardent pro-life, pro-family advocate. She is the daughter of the Rev. A.D. King and niece of the Rev. Martin Luther King, Jr. Her name is Alveda King.

More than 500 supporters of Saint Joseph County Right to Life gathered for their annual fund raising dinner Sept. 24 at South Bend’s Century Center. Alveda King was the keynote speaker. She quickly got to the heart of her message: black genocide.

King said that while blacks are 13 percent of the population they account for 37 percent of abortions. About one third of the abortions Planned Parenthood performs are on black women. Planned Parenthood has located the majority of its abortion facilities in minority neighborhoods claiming they are serving the poor. However, the racist and eugenicist origins of Planned Parenthood belie that claim. One out of two black pregnancies ends in abortion and black women are four times more likely to abort their babies than white women.

King played a trailer clip from the Life Dynamics documentary “Maafa 21.” The DVD is a very thorough exposé on the racist and eugencist roots of Planned Parenthood and the ongoing black genocide through abortion.

King shared how she underwent two abortions. Both times she was deceived about the reality of what abortion was. She also suffered a miscarriage related to her abortions. She became “pro-choice” for a period of time until in 1983 she was “born again.” Eventually she had six children. She went on to become a college professor and a Georgia state representative. St. Anselm College awarded her an honorary doctorate of laws.

King realized she had to help people realize the truth about abortion. She participates in the Silent No More Campaign by sharing about her abortions. King is a pastoral associate and director of African American Outreach for Priests for Life and Gospel of Life Ministries — www.priestsforlife.org. 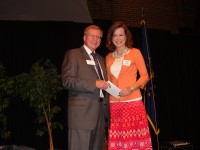 This year Saint Joseph County Right to Life’s Pillar of Life Award went to Mary Reilly Hunt for her long-term service for the organization as well as Indiana and National Right to Life. The Annette M. Macknick Courage Award was presented to Joan Mooney who has been a regular sidewalk counselor and office volunteer. Mary Daly was awarded the Brother John Lavelle CSC scholarship in recognition of her efforts from high school onward, her service as president of Notre Dame Right to Life and her organizing ND Response, the student group that opposed the honorary degree to President Barack Obama.

The next morning King was the featured speaker at a breakfast hosted by the Senior Men’s Club at the Martin Luther King Center in South Bend. In attendance were students from Washington High School. They belonged to three groups — the African American Male Leadership Group, Girfriends (female leadership group) and the Latino Student Union.

King again educated the attendees about the black genocide. She urged the students to wait for marriage before having sex. She encouraged the girls to dress modestly. Noting that a lot had changed in 40 years since the Civil Rights movement, King observed, “People change; God doesn’t change. So we say to President Obama, ‘we don’t want you to kill the babies.’ The election of a brown skin president was a wonderful thing. Now that brown skin president needs to protect the babies.” She urged the students to write the president about healthcare reform and to ask him to specifically have written into the bills the exclusion of abortion and euthanasia.

At the conclusion of both events King led the participants in singing “This Little Light of Mine.” She explained that the Civil Rights songs are based on Scripture. For example “We Shall Overcome” derives from Rev. 12:11 “They overcame him by the blood of the Lamb and by the word of their testimony,” and 1 John 4:18 “Perfect love casts out fear.”