On May 22, St. Pius X in Granger welcomed Bishop Kevin C. Rhoades to the parish to bless and dedicate their recently-installed Holtkamp organ. The instrument was formerly the property of the Basilica of the Sacred Heart, donated to the parish by the University of Notre Dame in 2016 for their new church building. Dedicated in 2017, the new church building included a Wicks organ in the east transept, but the Holtkamp now resides in the choir loft.

The road has been rocky for St. Pius X to complete the installation of the organ. One month after the Wicks was installed in 2018, AB Pipe Organ Company, the organization commissioned to install the Holtkamp organ, went bankrupt. Monsignor William Schooler, Pastor of St. Pius X, said that the parish was able to recover some of the money invested in the company, along with the pipes.

Next, they needed to find an organ company to restore and install them. “We selected Temple Organ Company out of St. Joseph, Missouri,” he continued. “They took possession of the pipes and began construction in their shop in St. Joseph.” 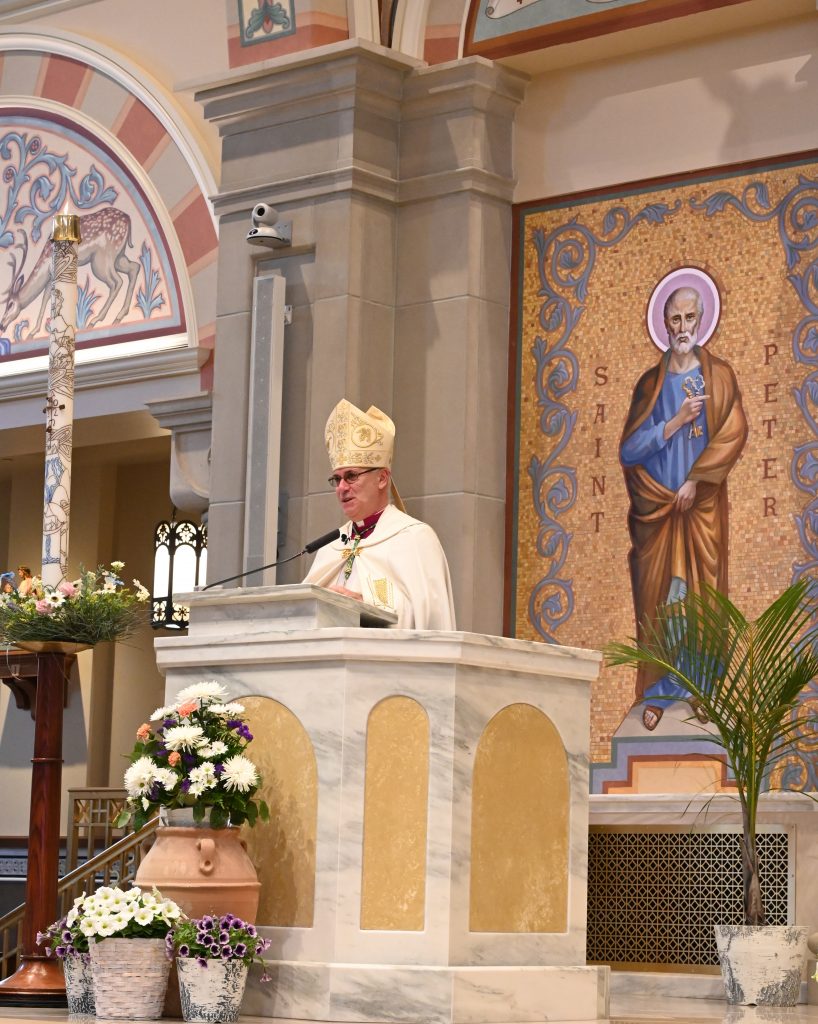 Derby Photography
“Music and song are more than an embellishment of worship. They are themselves part of the liturgical action.” says Bishop Kevin C. Rhoades, at the organ blessing for St. Pius X Parish in Granger on May 22.

The organ has 55 ranks of pipes, or a little more than 3,500 pipes, according to David Cool, owner of Temple Organ Company. With such a vast amount of pipes, the fact that all of them were found and are able to be used again was indeed nothing short of miraculous. Cool remarked that an organ of that size is “pretty rare” as “most churches aren’t as big as St. Pius.”

Even with its size, adjustments had to be made to the choir loft to accommodate musicians. According to Monsignor Schooler, Hoy and Father Bill Meininger, Pastor of St. Mary of the Lake in Culver and former Parochial Vicar at St. Pius X, took the lead on this part of the project.

The restoration process took about a year and a half, by Cool’s estimation, requiring four different segments of installment. The pipes had to be outfitted with new aluminum cases, which were painted gold. Even when the installation was completed, the formal dedication had to be postponed due to the pandemic.

Cool explained that one single pipe on an organ can produce only one tone, so 61 of these pipes are required to match the number of keys on a keyboard. Hoy stated that though St. Pius X has two separate organs, “they have become one organ with pipes in two locations.

“I have a console with five manuals (keyboards) that plays the pipes in both areas.”

The last time the Holtkamp sounded through the basilica was Christmas morning of 2015, and Karen Schneider-Kirner was the last person to play it there. Since its reconstruction at St. Pius X, she was privileged to play it again for a wedding.

To the parishioners of St. Pius X, she said, “It has been meaningful to hear the former pipes in your beautiful new sanctuary! These are pipes that sounded in the basilica for countless weddings, funerals, daily masses, and on high feast days for 27 years. There is still beauty and integrity to every pipe. The fact that they can still ‘sound a joyful noise to the Lord’ is most meaningful.”

For those who may wonder why the University of Notre Dame removed the organ, Schneider-Kirner explained that some of the instrument’s actions had become faulty and the university decided that the best plan of action was to have a new organ built by Paul Fritts of Tacoma, Washington. A generous donor helped make this possible and after months of assembling the 10,000 pieces that had been transported cross-country in two tractor-trailers, the basilica now boasts a new Murdy organ, named for the donor family.

“Pipe organs are known as the ‘King of Instruments’ due to their size, complexity, and power. No two instruments are the same, and each is shaped significantly by the space in which they are housed,” she continued. “One of the joys of being an organist is to explore how each instrument brings to life organ music and how it can accompany hymns and liturgical singing in a unique and powerful way.”

This was brought to reality at the dedication ceremony, where Dr. Andrew McShane, director of music at the Basilica of Notre Dame, served as guest organist.

In an email to Today’s Catholic, Monsignor Schooler stated, “I am grateful to the Basilica at Notre Dame for donating their organ pipes to us. I am also grateful to Bishop Rhoades, not only for coming to bless the final project, but also for his patience and understanding in this prolonged effort.”