“Every night I thank God for him and I pray for him. I never thought I’d be this lucky.”

Harriet Wise spoke with great love in her voice. She and her husband, Richard, celebrated their 70th wedding anniversary on Sept. 11th, 2018.

Both of South Bend, he from the east side and she from the west side, they were married at St. Hedwig Parish in 1948. Now 91 and 90 years old respectively, they have been parishioners of St. Matthew Cathedral Parish for the last 60 years.

Their joy of simply being with one another is evident.

“Church and prayer have always been No. 1,” Harriet explained. She was raised Catholic by her devout Polish immigrant mother, Josephine.

“Every day, once we entered the doorway, we spoke Polish and would say “Praise be Jesus Christ!” and she would reply, “Forever and ever, Amen!” 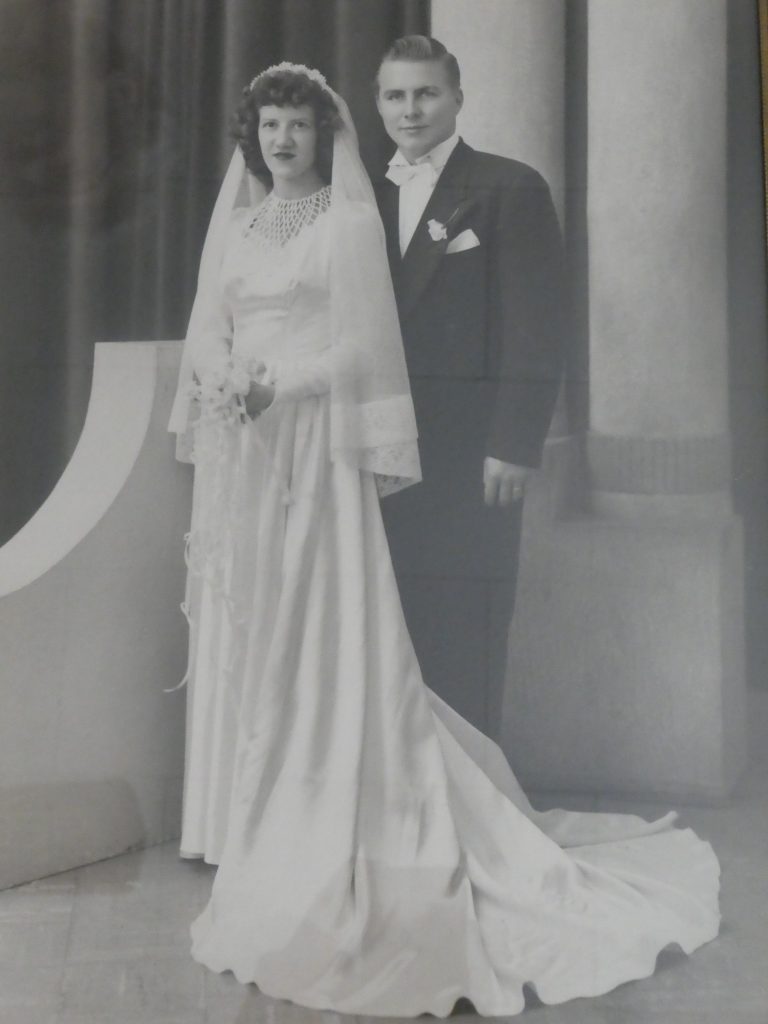 He was from an old Scotch-Irish immigrant family, but they had similar childhoods. “I think this is why we got along together,” he said, smiling, of his bride.

Richard knew he wanted to marry her first. After they had been seeing each other for a while he asked Harriet, “Don’t you think you love me enough?” one day.

They met at the Sky-High roller rink on the corner of Layfette and Wayne St, above a car garage where Richard worked. Harriet was in high school and went with her two older brothers, because for 15 cents they could roller skate to organ music from 7-9:30 p.m. They started dating, but not steadily. He was her date her junior prom at Washington High School. Then, Richard turned 18 and enlisted in the armed services. They corresponded by letter for two years.

“At first they (the letters) were very romantic. I didn’t date anybody else, but I danced with other fellows,” Harriet said. “When he was gone, my girlfriend taught me how to jitterbug and we used to go to sock hops. You would take off your shoes and dance in your socks in the gym.”

When Richard returned home four or five months later, he took her out on a date to the roller rink but in Mishawaka, where he was from.

“I told him I preferred dancing now. We would double date with his friend, Alex and his also-Polish girlfriend.”

They never went out on Tuesday or Thursday nights, but Harriet didn’t know why. 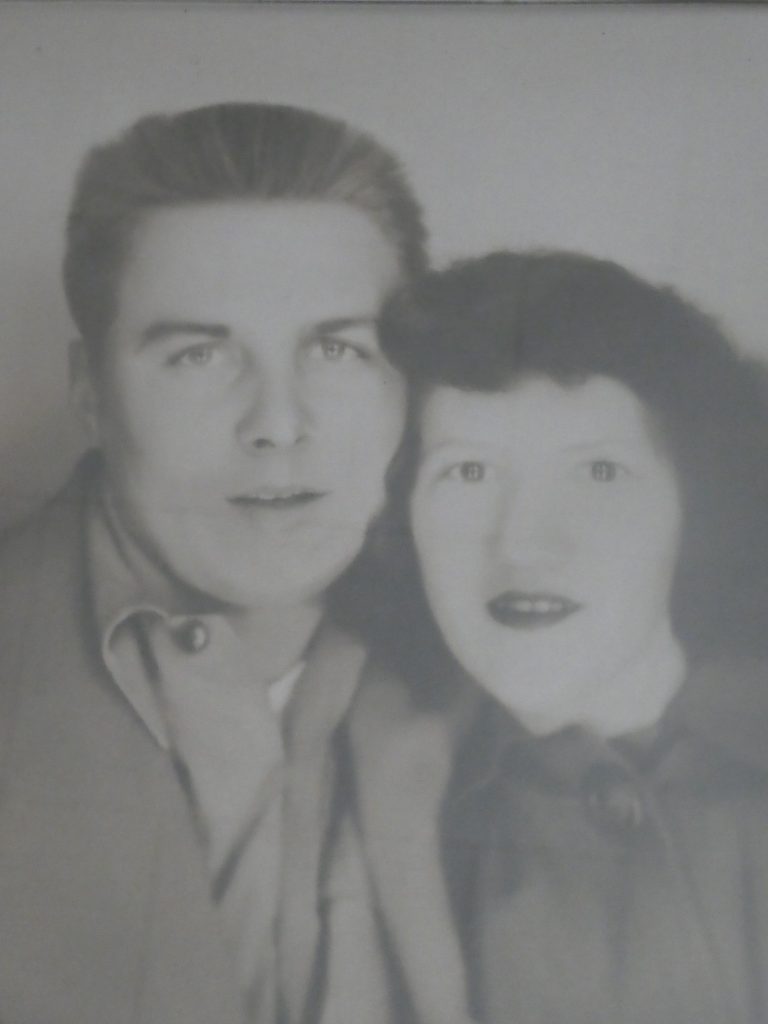 In April of 1948, Harriet’s mother passed away suddenly of a heart condition at 46 years old. “It sort of pushed everything,” she said. Harriet’s father had passed away when she was only 9 years old, and her mother had recently remarried.

During this difficult time, Richard revealed to her that he was becoming Catholic. Every Tuesday and Thursday evening, he was receiving instruction to join the Catholic Church. He had wanted to surprise both her and her mother, so that he and Harriet, too, could be married.

That September, 1948, Richard was received into full communion with the Catholic Church. A week later they were married and he could receive Communion. “That was one of the best parts.” His father, a Methodist, would comment about how “they passed the hat too much” at the Catholic Church, but told his son, “If you’re going to be a Catholic, be a good one.”

“And he sure has been!” exclaimed Harriet. “He goes to church every Sunday and says the rosary every day at St. Matthew. When we can’t go and say the rosary there, we say it at home. No. 1 is Church and prayer. … Some men would drink and then go home and you know … He never cussed at me. When he got mad, he would say, “Hold that thought — and go outside or to the garage. And then one of us would apologize.”

“The only piece of advice my mother- in-law ever told me was “It takes two to argue. He can’t argue if I keep my mouth shut,” Harriet recalled. “We lived with them for the first two years. She was a saint. I never heard her say a cross a word about anybody. I couldn’t help but love her.” 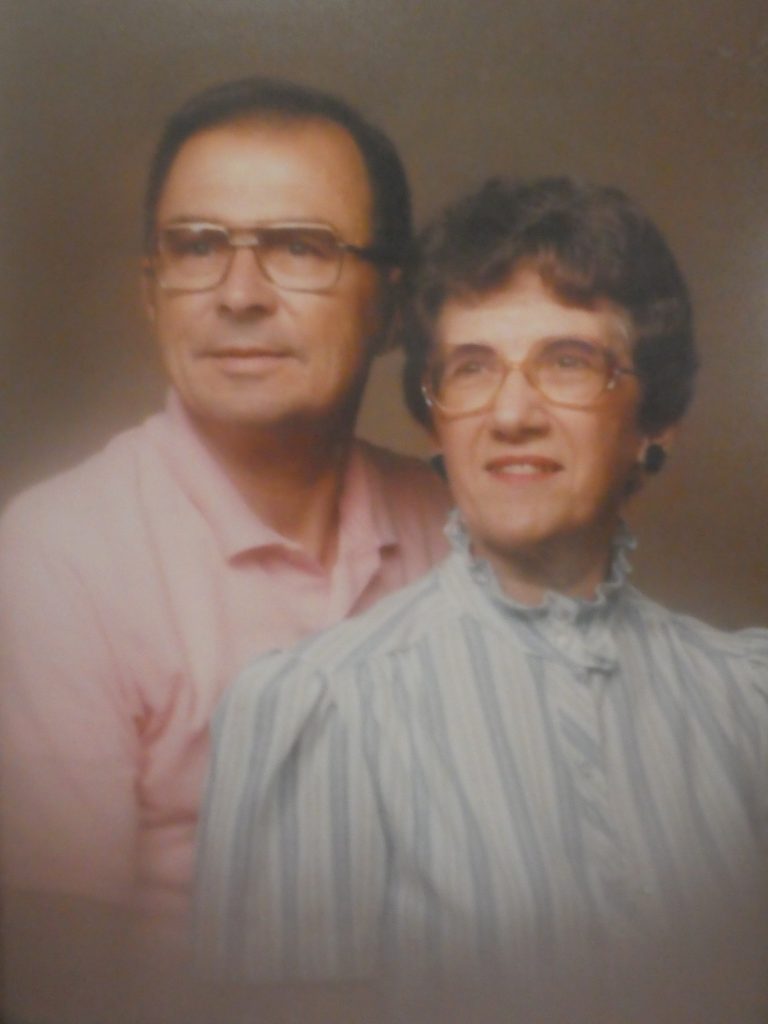 In 1952, they moved into their home near St. Matthew Parish and still live there today. They had two children, Nancy and Rick, Jr., who also live in South Bend. “I was so pleased when they were born — and very close to Jesus then. “

“We always discussed everything. I was a penny pincher and saved,” Harriet explained. “We’re tightwads,” Richard confirmed with laugh. “For dates, we would go for a walk in Leeper Park and get a bag of potato chips and bottle of pop and walk and talk. We got along together.”

“We always talked everything out. When we bought new windows, which one and when or when we thought about enclosing our front porch, even our water softener,” she said, laughing.

One can see the joy from the sacrament and life lived in trust of God’s providence in Harriet’s demeanor. In the Catholic sacrament of marriage, the husband and wife witness Christ’s spousal love for the Church. Man and women were created for each other, as explained in the Book of Genesis in Sacred Scripture. Richard and Harriet demonstrate well their love for God in how they treat and love one another. Through small gestures of touching one another’s arm, a loving laugh or smile at a thoughtful memory, they explained how they have fully lived the past 70 years of marriage. “Seventy years is a long time,” she said with a grin, “and we do worry more now.” But clearly the permanent union of a man and woman capable of knowing, loving and serving God is visibly alive in the marriage of Richard and Harriet Wise.

As the Wises got older, they continued to enjoy one another’s company. “We love dancing and musicals at the Morris or going to Amish Acres on Sunday — you know, theater things. He was a part of the golden gang — a bowling league — and we both enjoy working on puzzles.” The best part of their day is still just being with each other.