Nearly 1,500 years ago, St. Benedict and St. Scholastica were more than just twins. They were best friends. They shared their devout Catholic faith, and are believed to have spent long hours discussing religion and spirituality.

How apt, then, that Jenna Knepper, 27, chose St. Scholastica as her patron saint when she completed her initiation into the Church during the Easter Vigil Mass this year at St. Joan of Arc Parish in Indianapolis. The reason becomes clear as she shares her story.

“We were baptized Catholic,” said Knepper of her and her three siblings, including her twin brother Joseph. “But growing up, Mom didn’t take us to Mass much. She was a single mom. … We grew up not knowing much about Catholicism, or Christianity for that matter.”

“To me that wasn’t compatible with what I was learning in the Protestant church,” she said. “I thought he was wrong. Faith alone, grace alone and Scripture alone — I was all in on that. I started praying for my brother out of concern for him entering RCIA.”

Yet she witnessed a “clear transformation in his life.” By the spring of 2016, he was accepted as a seminarian of the Diocese of Fort Wayne-South Bend.

“I know my brother. I love my brother. He’s my best friend. And something curious was going on,” said Knepper. “He had a successful career. To see him discern the priesthood was incredible to witness.” 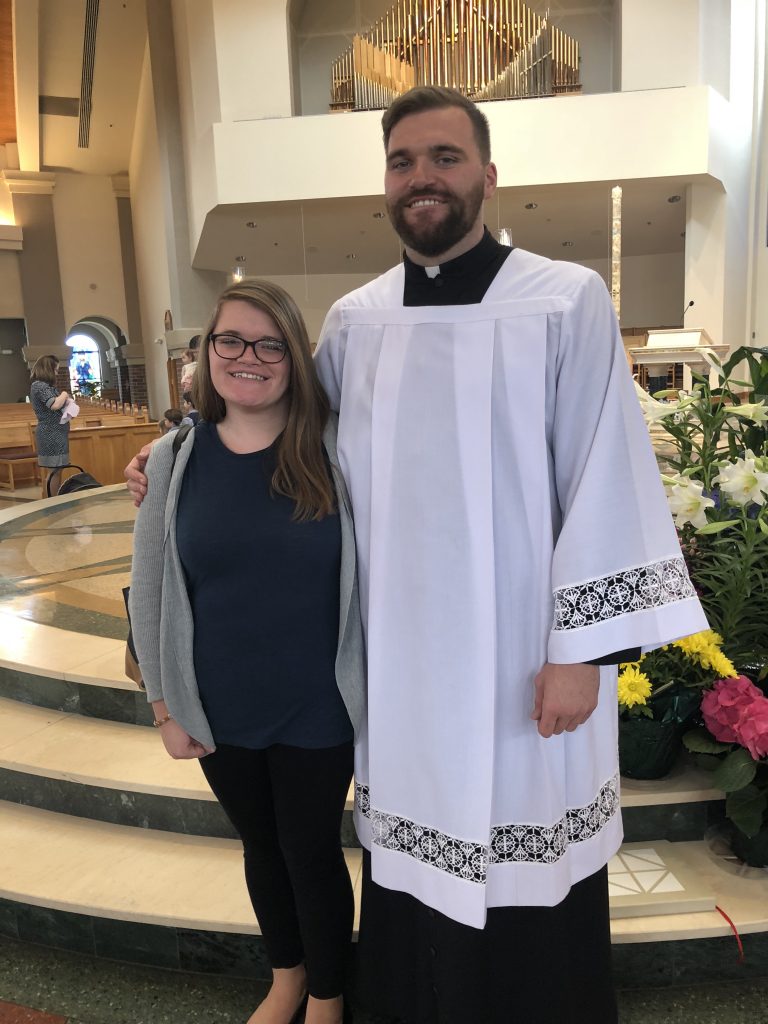 Jenna Knepper, who was received into full communion with the Church during the Easter Vigil Mass on March 31 at St. Joan of Arc Church in Indianapolis, smiles with her twin brother, Joseph Knepper, a seminarian for the Diocese of Fort Wayne-South Bend, Ind., after the Easter Mass on April 1 at St. Vincent De Paul Church in Fort Wayne.
— Provided by The Criterion

Like St. Benedict and St. Scholastica, the Knepper twins had “hundreds of conversations” about God and the Catholic faith. Through such discussions and through the witness of her brother and some Catholic friends, and “by grace,” said Knepper, “God slowly started to reveal to me the beauty of the sacraments, the Real Presence of the body and blood.”

She started worshiping at St. Joan of Arc Parish in 2016. But it was a trip a year ago to visit Joseph at Mount St. Mary’s Seminary in Emmitsburg, Maryland, that propelled her faith forward.

“To see these [seminarians] and God using them to witness to me, [the faith] became very real to me through my brother’s life and their lives,” said Knepper. “After that I discerned and kept praying about RCIA. I knew for a few months before RCIA that this was the journey for me.”

“It was St. Scholastica’s feast day [on Feb. 10],” Knepper recalled. “My brother sent me a reading about her feast day without realizing she was a twin. He said she reminded him of me.”

Shortly afterward, Melinda Rivelli, a pastoral associate at St. Joan of Arc Parish, mentioned the saint to Knepper as a possible patron saint.

“I was like, ‘Oh my gosh!’” she said. “St. Scholastica was clearly pursuing me. Knowing her story — her brother was a monk, her love and devotion for her brother. The one thing known is she loved him so much. … [It’s] that sibling love that’s been so foundational to my faith calling.”

“Grace” is a word Knepper uses time and again when speaking of her faith journey.

“The things I questioned the most [about Catholicism] have been the most filled with grace,” she said of the sacrament of reconciliation and calling upon the Blessed Mother’s intercession.

“And then you have two twins growing up without a faith, but through God’s grace and his pursuit of us, leading each of us to the Church in our own unique way — it’s just grace.”