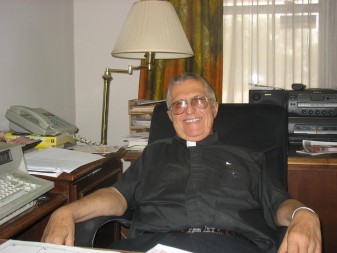 Father Kenneth J. Sarrazine, most recently serving as pastor of St. Joseph Parish, Roanoke, and St. Catherine of Alexandria, Nix Settlement, is retiring in June. He plans to move into St. Anne Home and Retirement Community in Fort Wayne where he can celebrate Mass.

ROANOKE — “I like everything about being a priest,” said Father Kenneth J. Sarrazine prior to his retirement this month. “My priesthood was a great gift from God!”

Since July 1998 he has served as pastor of St. Joseph, Roanoke, and St. Catherine of Alexandria, located near Roanoke in Whitley County, commonly known as the Nix Settlement.

Father Sarrazine was ordained on Dec. 22, 1962 by Bishop Leo A. Pursley in the Cathedral of the Immaculate Conception, Fort Wayne.

Normally, ordinations were held the last Saturday in May, Father Sarrazine explained. But since Bishop Pursley thought he would be in Rome in the spring of 1962 for another session of the Second Vatican Council, he rescheduled the ordinations to December. As it turned out the bishops didn’t return to Rome until the fall of 1963, but the ordination date was not changed.

“Actually, we’re officially the class of 1963,” Father Sarrazine continued, because after ordination the five members of the class returned to the seminary to complete the final semester. Nevertheless, Father Sarrazine will celebrate 50 years of priesthood this coming December.

Born in Fort Wayne to Norman and Florence (Bowers) Sarrazine, young Ken attended St. Louis Academy at St. Louis, Besancon Parish. He is the oldest of six brothers and three sisters, all still living except for his youngest sister who died at 14 months.

In the sixth grade he heard a talk by Msgr. Joseph Hession describing his days in the seminary. “He made it sound really difficult,” Father Sarrazine said, “saying that nobody could do it!” He took it as a challenge and said to himself, “It can’t be that impossible or he wouldn’t be here!”

In the eighth grade Sarrazine again was influenced toward a religious vocation when he attended a retreat conducted by a Precious Blood priest. “When I told my parents the priesthood was something I would like to look into, they immediately took me to the pastor and discovered a bus trip had been scheduled in two weeks to Wawasee seminary for youngsters interested in learning more about the priesthood.” And the rest is history, as it’s often said.

After completing his studies, his first assignment in June 1963 was as an assistant at St. Vincent de Paul, Elkhart. Ironically, the pastor was Msgr. Joseph Hession.

“Msgr. Hession presided at the marriage of my parents, he baptized me, and I received my First Reconciliation and First Communion from him,” Father Sarrazine said.

Fifteen months later Father Sarrazine was appointed assistant at St. Henry, Fort Wayne. While there he had an experience that stayed with him throughout his priesthood and, in fact, became a vital part of his ministry.

“While I was in the seminary I never was around a person who was dying,” said Father Sarrazine. “I never thought I would be equipped to handle that kind of situation,” he added. One night, however, when his pastor was away from the rectory and the pastor at St. Joseph, Hessen Cassel, also was gone, an accident occurred near Hessen Cassel on U.S. Highway 27 involving a senior girl from Decatur Catholic High School. The call came to St. Henry requesting a priest at the scene. “There was no one else available, so I went,” Father Sarrazine said.

“The young lady had been killed and was lying in the ditch,” he related. “I gave her conditional absolution and anointed the body. And after it was over I realized I had remained perfectly calm during the whole scene.”

Since that time, visiting the sick and shut-ins as well as the dying has been a vital part of his priestly ministry. It is a great privilege to be with the dying and something he can do well, the soft-spoken priest said. Since March 2003, Father Sarrazine has been serving as a chaplain at Lutheran Hospital in Fort Wayne.

Father Sarrazine’s favorite duties as a priest are celebrating Mass and the sacraments, and teaching RCIA (Rite of Christian Initiation for Adults) classes. He also enjoys reading and cooking.

Father Sarrazine was appointed an assistant at St. Jude, South Bend (1965), as well as the spiritual moderator for the South Bend Deanery Council of Catholic Nurses (1966). He also was named an assistant at St. John the Baptist, New Haven (1972), and at the Cathedral of the Immaculate Conception, Fort Wayne (1975). In July 1976, Father Sarrazine was appointed an advocate for the diocesan Tribunal.

In retirement, Father Sarrazine quipped he plans to “stay out of the way of whoever is coming next at the parish.” He does plan to be available to help other priests as much as he can. Father Sarrazine hopes to move into St. Anne Home and Retirement Community in Fort Wayne where he can celebrate Mass and “do whatever else is in front of me,” he added. “I’m looking forward to what retirement is going to be like.”