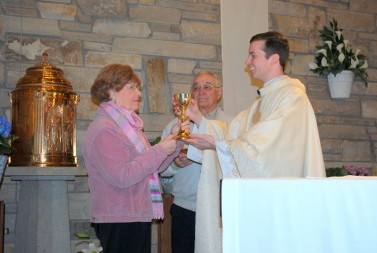 BREMEN — A faithful Catholic, humble servant, loving mother and wife are just a few of the words that friends and acquaintances use to describe St. Dominic parishioner Janet Lakner. Janet’s son Greg Lakner proudly adds the adjective “courageous” when describing his mother and her life’s journey.

In 1975, while in for a routine heart exam at Texas Heart Institute in Houston, Texas, Janet was found to have an under-developed heart, likely caused from rheumatic fever she suffered as a child. The small heart meant that her aortic valve was under-developed as well and was not performing properly.

It was decided that her aortic valve would be replaced with a swine valve, which was a common practice at the time. “She displayed great courage before and after the surgery, recovered fully and was sent home,” said Greg.

About a year later in 1976, she experienced complications with the animal valve. “There were many times when I saw her struggle to breathe and thought that the end was near. But never did I see her courage waiver,” Greg recalled.

Because her body was rejecting the new valve, she went back to the Texas Heart Institute and cardiologist Dr. Denton Cooley was brought in to examine Janet. Among Dr. Cooley’s achievements was the invention of an artificial heart valve known as the Cooley Cutter. To relieve the pressure built up in her small heart, a rare procedure to extend a conduit from the heart chamber to her stomach was designed. Janet was the third recipient in history to receive the Cooley Cutter.

During this delicate surgery, Janet went into cardiac arrest and had to be revived by defibrillation. She recalled an out of body experience where she could see what was happening in the room and going to heaven.

“(In heaven) there were all these flowers and I was running. I saw gates that were opening and I saw an image. And I said ‘I’m coming, I’m coming,’ and as I got closer, the gates started to close. And I woke up,” Janet noted.

Due to her fragile condition following surgery, it was decided that a second surgery the next day was needed. Janet’s husband Frank recalled that her father, who lived near Houston, brought in two women to pray over Janet the night before the second surgery. “They prayed all night long,” said Frank.

The doctor who examined Janet the next morning was shocked to find Janet doing well and at first thought she must not be the right patient. Dr. Cooley was called in and confirmed that Janet was fine and did not require a second surgery.

After Janet was released from the hospital, the doctors predicted that with physical therapy she would live about 12 more years. Thirty-six years later, Janet still has the original artificial heart valve implanted by Dr. Cooley.

The mother of three children and loving wife, currently celebrating 55 years of marriage, knew that she had to do the hard work that came from the blessing of the successful surgery. Janet made a commitment to a regular exercise routine and continued her church stewardship as an extraordinary minister of the Eucharist and lector during the parish’s daily Liturgy of the Hours.

Father Bob Lengerich, pastor of St. Dominic Church, spoke of the importance of Janet’s stewardship in the parish. “The greatest gift she shares with all of us is her kindness and compassion. God has given her a real charisma of encouragement and she always has something nice to say to everyone. Even when she’s not feeling well herself, she’s able to find the strength to make others feel better. Mass just isn’t the same when she’s not in our church!” said Father Lengerich.

Greg noted that his mother has faced many non-heart related health issues since the last heart surgery, including kidney problems, diabetes and back surgery, and has met each with courage, making a full recovery.

“The courage she has displayed in each face of death is a testament to her faith in God; faith that is as long and deep as the scar on her chest. It is unknown how many children have been rocked to sleep to the ticking of ‘Nana’s clock’; the unfailing valve in her chest that pumps the blood of life to a woman that never gives up; a woman who courageously refuses to give up on her mission here on earth. “She is my hero,” said Greg.