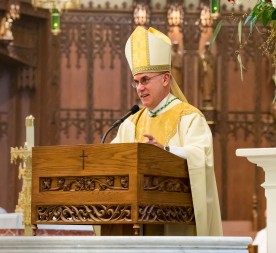 Bishop Kevin C. Rhoades shares this homily during the closing Mass of the Fortnight for Freedom on July 4 at the Cathedral of the Immaculate Conception.

The following is the text of Bishop Rhoades’ homily at Mass on July 4, 2015, in the Cathedral of the Immaculate Conception, Fort Wayne:

On July 4, 1776, in the midst of the American Revolution, the Continental Congress meeting in Philadelphia courageously declared the thirteen colonies independent from Great Britain. Today, 239 years later, we celebrate this Declaration. With all our fellow Americans, we celebrate our freedom on this Independence Day, the Fourth of July.  As Catholics, we especially pray for religious liberty as we conclude the 2015 Fortnight for Freedom.

Many of the colonists who came to America in the 17th and 18th centuries were fleeing religious persecution. Like the Puritans and Quakers, Catholics came to America to escape persecution.  English and Irish Catholics first settled in Maryland since the first Baron of Baltimore, George Calvert, and his brother Leonard, who were Catholics, had founded Maryland as a haven for persecuted Christians. Catholics and Protestants lived peacefully side by side in Maryland. The famous Act of Toleration of 1649 guaranteed religious liberty. But in 1654, when Puritans took over the governance of Maryland, the Act of Toleration was repealed and Catholics were outlawed. Maryland joined the other colonies in enacting the English penal laws that restricted the freedom of Catholics: the denial of the right to vote or to hold public office, the prohibition of public worship, and even the imprisonment of priests. The penal laws against Catholics were in force with different levels of severity in the colonies for over a century. Pennsylvania was somewhat an exception, thanks to the religious tolerance of William Penn and the Quakers.

By the time of the American Revolution, the number of Catholics in the thirteen colonies was rather small: about 25,000 among 2 ½ million colonists. For over a century, the small body of Catholics in the thirteen colonies had clung to their religious faith despite active persecution and denial of their civil rights. They supported the American Revolution with the hope that independence from Britain would bring them greater religious liberty in the new republic.

American Catholics, including Father John Carroll, who in 1790 would become the first Catholic bishop in the United States, the first bishop of Baltimore, received with great satisfaction the Constitution in 1787 and the Bill of Rights a couple years later, especially the First Amendment and its definition of our first freedom: “Congress shall make no law respecting an establishment of religion, or prohibiting the free exercise thereof.” The First Amendment allowed Catholics the freedom to practice their faith, yet it did not eradicate the cultural anti-Catholicism that persisted in sometimes vigorous form during the following century. Sadly, this persistent prejudice is still alive today, especially among certain elites in academia, Hollywood, the media, and other influential molders of public opinion.

Our concerns about religious liberty today are especially focused on a more general anti-religious cultural movement, rooted in secularism and relativism, which seeks to limit the role of religion in public life. This was certainly not the intent of our founding fathers who recognized the essential role of religion and the virtues it inspires in providing the foundation for the success of a democratic society. They believed in God and the divine law. In the Declaration of Independence, they specifically referred to “the laws of nature and of nature’s God.” They were not secularists and they were not moral relativists. They declared: “We hold these truths to be self-evident, that all men are created equal, that they are endowed by their Creator with certain unalienable rights, that among these are life, liberty and the pursuit of happiness.” At the end of the Declaration, they affirmed their “firm reliance on the protection of Divine Providence” as they pledged to each other “their lives, their fortunes, and their sacred honor.”

Our founding fathers believed that religion, virtue, and morality based on the natural law were essential foundations for the success of the American Experiment. In his farewell address, George Washington declared: “Of all the dispositions and habits which lead to political prosperity, religion and morality are indispensable supports. In vain would that man claim the tribute of patriotism who should labor to subvert these great pillars of human happiness.” John Adams wrote: “It is religion and morality alone which can establish the principles upon which freedom can securely stand. Religion and virtue are the only foundations… of republicanism and of all free governments.” As Catholics, we agree with this vision of our founding fathers. Recently, Pope Francis said something very similar in the following words: “When, in the name of an ideology, there is an attempt to remove God from society, it ends up adoring idols, and very soon men and women lose their way, their dignity is trampled and their rights violated.”

The Catholic Church is at the forefront today in advocating and fighting for these indispensable supports of our nation and its freedom: for example, in defending the right to life and the truth about marriage. Through this Fortnight for Freedom, we are responding to an aggressive secularism in our society. We are standing up for our faith, to be sure. We are also standing up for the self-evident truths proclaimed by our founding fathers. We stand against the subjectivism and relativism that seeks to sever freedom from its indispensable foundation in truth. We stand up for the freedom not only to worship, but also to live our faith without government coercion to violate the sacred sanctuary of our conscience. Pope Francis says: “Religious freedom is not only that of private thought or worship. It is the liberty to live, both privately and publicly, according to the ethical principles resulting from found truth.” That is why we continue to vigorously object to the unjust HHS mandate that seeks to force us to provide health coverage for morally objectionable services. That is why we are very worried about being forced to cooperate with a redefinition of marriage that goes against the natural order as established by God. Sadly, in today’s cultural climate, speaking and defending the truth about marriage often results in unjust and false charges of bigotry. We can expect claims of discrimination for upholding what for millennia has been considered a self-evident truth: that marriage by its nature is between one man and one woman. In all this public debate about these matters, notice that the often anti-Catholic or anti-Christian bigotry of the Church’s critics and opponents is ignored.

Jesus teaches us to render to Caesar what belongs to Caesar and to God what belongs to God. In the contemporary debate and struggle, we seek to have the freedom to do so. This is part of our human dignity — not only to be free to worship God, but free to serve Him and others through our schools, colleges, universities, hospitals, charities, and other institutions and to do so without compromising our faith and moral convictions. There are many in our society who disagree with the teachings of the Catholic Church on various issues. They have the right to disagree. But it is quite another matter to deny to us the right to live our faith and to conduct our lives, ministries, and works in accord with the Church’s teachings. And rather than engaging in civil and respectful debate, critics and opponents of the Church will sometimes resort to attacks that reveal the persistent anti-Catholic prejudice that for some reason is still deemed acceptable in our culture.

On this Independence Day, as we pray for the protection of religious freedom in our nation, let us also remember in prayer the millions of our brothers and sisters throughout the world who are persecuted and suffer injustices because of their faith. Not only are so many denied the right to live their faith or the right to worship, so many Christians and other minorities, innocent individuals and communities, are subjected to barbaric acts of violence, evicted from their homes and native lands, or sold as slaves. Some are killed, beheaded, crucified, or burned alive. It is a great sacrilege that this evil is being done in the name of God. We are living in a new age of Christian martyrdom. May these present-day martyrs inspire us by their faith and courage! Their suffering and death was not in vain: their lives bear eloquent witness to the love of Jesus Christ.

Today ends the Fortnight for Freedom, but it does not end our prayers and efforts on behalf of religious liberty. May God who gave us life and liberty, bless us, our nation, and the world with renewed determination to protect these cherished gifts!