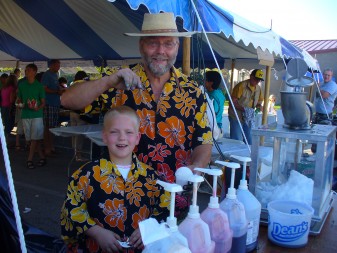 FORT WAYNE — When Tone Schortgen married Janeen over three decades ago he was open to all the glorious possibilities the future might hold. Now 36 years later, with a loving wife, four children and nine grandchildren, he has his hands — and heart — full.

A native Hoosier, Schortgen was raised the fourth of Robert and Agnes’ 10 children on the Schortgen farm where his father and grandfather impressed upon him not only a strong work ethic, but a deep faith and strong values as well. Those values now translate to love of God and family for this tool and die journeyman who has been committed to his trade for the past 37 years.

Schortgen adores all of his children and their spouses, as he does his grandchildren, each with their own unique personality. “Being a grandparent is awesome,” exclaims Schortgen, who says there are so many things he sees watching his grandchildren grow up that he missed with his own kids. “They see the simple-ness of life and bring me back to ‘simple.’”

All the Schortgen grandchildren spend as much time as they can with their doting grandparents, some living a distance and others close by. But one little guy, nine-year-old Max, Rachel and Lonnie’s son, holds a special place in this loving grandpa’s heart. He’s been a fixture in Schortgen’s life since the day he was born. 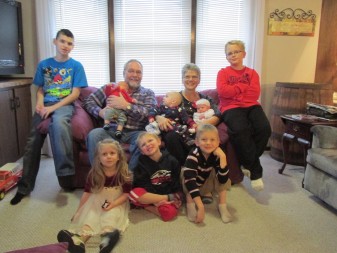 Tone Schortgen and his wife Janeen pose for a family photo with some of their grandchildren from left Zacch, Heath, Grampa Tone, Abishai, Gramma Janeen, Mia, Max, and in front Adelaide, Elijah and Uriah.

With daily contact during the first three years of Max’s life Grandpa Schortgen recalls backpacking his little grandson as he attended an auction, an activity he enjoys. “He went to his first auction at six months,” Schortgen says chuckling. He adds that through the years Max has become known as his shadow because “he’s always with me,” he says.

When Max’s parents moved to a nearby town, grandpa and grandma were still on hand each week to visit their grandson and his brothers Zacch and baby Elijah while Rachel and Lonnie attended Bible study group. Schortgen, long-time parishioner of St. Elizabeth Ann Seton Parish where he is an usher, member of the Knights of Columbus and a retired co-spiritual director of CRHP, is firm about sharing his faith with not only his children but his grandchildren, and recalls praying with them at meals and bedtime.

To encourage an interest in Mass attendance Schortgen invited Max to usher with him. “I thought if he could serve and be involved … and it’s exploded.” Max now excitedly anticipates ushering and marks his calendar when his grandpa receives his schedule. Max also assists his grandpa at the St. Elizabeth summer festival, both in their famous Hawaiian shirts in the food tent selling snow cones. “He enjoys people. He’s not shy and he has an agenda. … He’s a deep thinker,” says Schortgen about his outgoing grandson.

Max’s grandpa has also found great joy in passing his love of hunting and fishing on to Max, who relishes the taste of deer, squirrel and bass. Schortgen says, “We spend a lot of time fishing. I’ll just call and see if Max is free and we’ll go.”

During those times conversations between grandfather and grandson focused on life with grandpa imparting wisdom and Scripture to fit the topic. “I enjoy watching him grow up, seeing the aspects and gifts God’s given him. And bringing them into the light constructively for him is a big part (of grandparenting),” says Schortgen, who admires his grandson’s fluency with the Bible. He sees a bold intelligence in his tenderhearted grandson, who loves to help others when he’s not playing chess or with his Legos.

When Max’s dad, Lonnie joined the army and left for bootcamp, Rachel and her boys moved back home to the Schortgen household. As soon as Lonnie was stationed in Washington State, the family moved out and Schortgen recalls the solitude of his recently youth-filled home. “I’d see one of their toys and it’d get to me. It got quiet,” he says. But visits across country kept the families united.

When Max’s dad was deployed to Afghanistan in 2011, the family took action. Rachel and her boys moved back to Fort Wayne to a home only four blocks from her folks. It was at that time that Max and his little brother were baptized.

For the next 15 months the Schortgens were able to be a support for their daughter and grandsons as they waited for Lonnie to return. Max enjoyed sleeping over at his grandparents’ house when he could and formed a ritual of sharing popcorn with his grandpa as they watched their favorite TV shows.

When asked how he imparts his values and faith to his children and grandchildren Schortgen simply says, “By living it each day.”

“My dad used to say, ‘Live each day as if it were your last,’” says Schortgen, who seems to do just that as he nurtures his family with quiet passion through their joys and trials. Max’s mom, Rachel calls her dad a “behind the scenes type of guy.”  “Things wouldn’t get done if you weren’t there,” she says.

Of his fatherhood and grandfather status Schortgen shyly admits it’s natural to be a father. But he doesn’t take any credit. “With the support of a good wife and having supportive kids — that’s what makes fathering easier,” he says. His advice this Father’s Day, “If your dad is still alive, give him a hug and tell him you love him.”