There is a tradition in Eastern Catholicism that sets Nov. 21 as the day to commemorate the presentation of the Blessed Virgin Mary at age 3 to the Jewish temple in which she would live. Historically there is no evidence for the story, but the day that honors Mary’s dedication to God became known as Pro Orantibus Day — the day to pray for those who dedicate their lives to prayer.

On this day, Catholics of the Diocese of Fort Wayne-South Bend can remember the only religious cloister in the area, a group of nuns who do exactly that. The Poor Sisters of St. Clare are a small community of seven nuns living together on Fort Wayne’s southeast side. They retain the use of the old St. Andrew Church, which was formally closed in 2003. They lead lives of poverty and prayer, following the example of their foundress, St. Clare of Assisi. 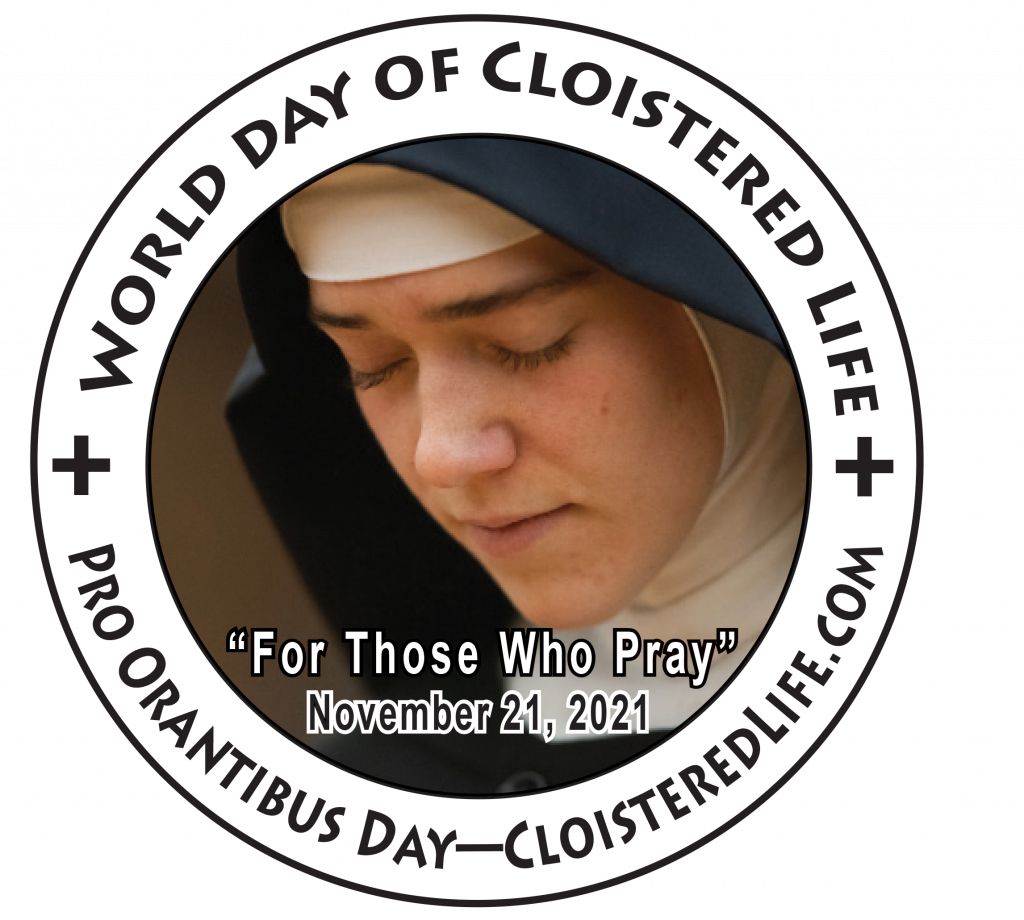 The Poor Clares came to Fort Wayne around nine years ago, after Bishop Kevin C. Rhoades saw the lack of a contemplative community in the diocese and supported the sisters’ move. But the process of forming a new monastery is long, so they are currently considered a public association of the faithful rather than a full-fledged monastery.

Sisters Celeste Marie Carey, the abbess, Karolyn Grace Wertner and Marie Veronica Goins spoke to Today’s Catholic about their life and how their prayers bring blessings to those far beyond the cloister walls.

“The gift of the cloistered, consecrated life is we get to image mother Church in a very tangible and beautiful way, where we really do enter into the Church’s liturgy in a way that has this nuptial meaning,” Sister Karolyn Grace explained. “Our whole lives, because we’ve been set apart and offered in a special way for this diocese, is just kind of taken up into this heavenly liturgy.”

She went on to describe their daily schedule, which consists of gathering as a community seven times a day to pray the Liturgy of the Hours, even waking at 2 a.m. for matins. 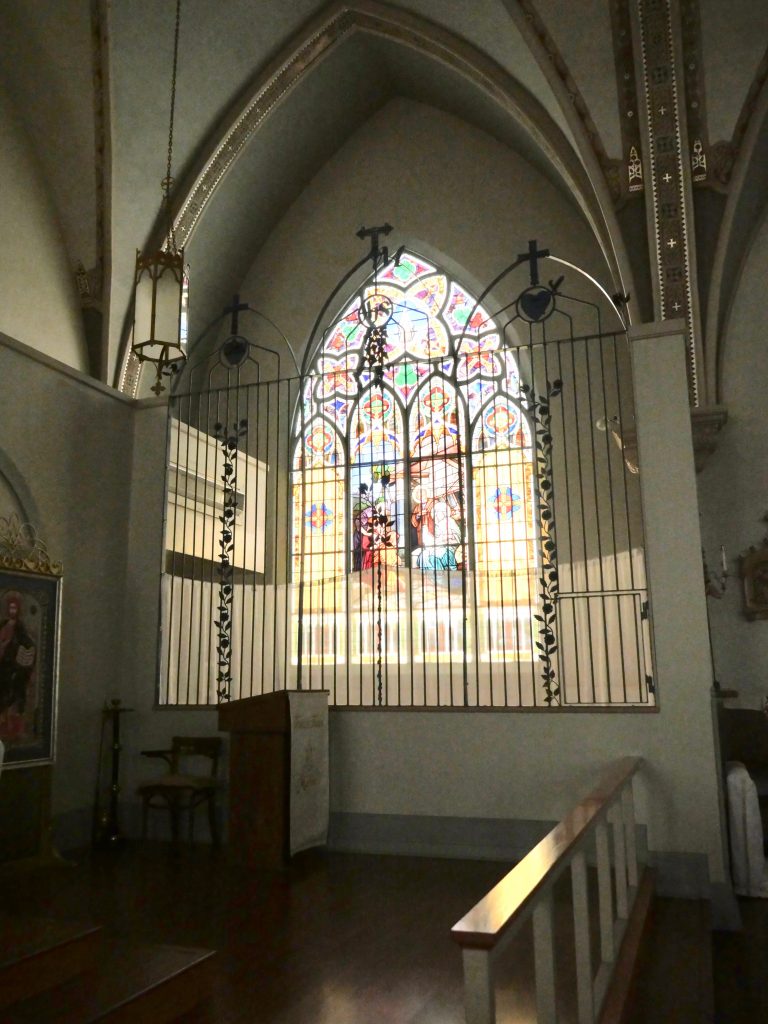 Jennifer Barton
Behind the bars of the Poor Clares cloister in Fort Wayne live seven women who have dedicated their lives exclusively to praying for the Church, the diocese and for individual requests. Nov. 21, Pro Orantibus Day, is an occasion for those for whom the sisters pray to in turn pray for them.

A rotation of priests comes to say daily Mass for the nuns so that they may receive holy Communion. Laypeople who know about the nuns often send them prayer requests via letters or the cloister’s limited portress hours. Sister Karolyn Grace stated that “our prayers are especially anointed, consecrated for the Diocese of Fort Wayne-South Bend.”

Choosing a life of near-total seclusion is no simple thing. Sister Marie Veronica became a cloistered nun because, as she put it, “My heart’s deepest desire was to give myself to Jesus in a spousal way, which He had put into my heart. So, this life was so perfect because that’s what we do here; we give ourselves.

“It’s like a painful sacrifice, but it’s also a gift that God gives. The rewards are hundredfold for those who have the gift of this call to follow Him.”

She described the feeling as a pain that expands the hearts of those called to the cloistered life. Sister Celeste Marie echoed the sentiment, stating, “The beautiful way of expanding — it’s a freedom to love more. We’re not limited to one family, so we can love the way God loves, a universal love. It’s incredible. It’s the only way you could be happy doing it, to know it expands your heart; it’s more love.”

Embracing the cloister also meant foregoing dreams of family life, but they have found that the love of God more than makes up for that. And the sisters are best friends and feel deeply the emotions and sometimes the turmoil in each other. “It’s an intensely intimate family life,” said Sister Celeste Marie.

Their vocation is a complement to the male vocation of priesthood. Sister Karolyn Grace described this complementarily thus: “Just as the priests are in a special way conformed to our Lord Jesus Christ … we’re able to image Our Lady, who is the perfect model of the Church, who is a virgin mother and a bride.”

There is a certain symbiotic relationship between priests and nuns. Nuns need priests to bring them the Eucharist, and priests rely on the prayers of the sisters to perform the duties of their vocation.

“Men and women, we need each other to become fully who we are,” said Sister Marie Veronica. Both priests and sisters also give their physical selves in the deepest love of God. “That model of Mary and Joseph in their special vocation is an image that we get to live in a way with priests particularly,” she remarked.

Father Dennis Di Benedetto, pastor of St. Robert Bellarmine Parish in North Manchester, is a personal recipient of the Poor Clares’ prayers, which aided his journey into the diocesan priesthood. He said, “Even practicing Catholics don’t fully understand the value of the contemplative life. We Americans are so fixated on ‘doing’ that we forget what is more important is ‘being.’”

He spoke of the incredible power behind the hidden prayers of the cloistered sisters, and how, without those prayers, none of the visible work of the Church could be completed.

“The Church has a lot of moving parts, but all of that energy (i.e. grace) is coming from the silent, unseen, unmoving battery of the cloister. … There’s more going on in the spiritual realm than meets the eye, and a lot of it has to do with what our sisters are doing all day and all night in the cloister.”

Eschewing a life of comfort, the sisters have no modern appliances, sleep on the floor and are dependent upon others to bring them food other than what grows in their two vegetable gardens. Additionally, they rely on the prayers of others to maintain their challenging vocation. Pro Orantibus Day reminds those outside the cloister to pray for and thank God for these blessed vocations.

“This day, set apart, means so much to us because we value prayer. To know people are praying for us means the world,” said Sister Celeste Marie.

The prayers of priests, especially, bring joy and comfort to the sisters. She said that when a priest offers his Mass for them, “I can’t exaggerate what that does for us. We know that God honors that; it’s the most powerful form of prayer.”

There are many contemplative monasteries throughout the world and more being built at this time in history when prayer and silence are in great need. Aside from prayer support, people of the diocese can help support the Poor Clares through donations to JAGH Preservation, the company in the process of restoring St. Andrew church for the nuns’ continued use.

“Don’t be afraid to go deep in your prayer lives and to make this diocese a place where our Lord can really be loved,” said Sister Karolyn Grace. “The most important thing you can do during your day, no matter what beautiful ministries that you may be called to, is just to pray to God. He loves it when we pray to him, He’s longing for our love.”

This year’s Pro Orantibus Day logo by The Institute on Religious Life features a nun from the Diocese of Fort Wayne-South Bend, Sister Lucia Marie Langford of the Dominican Sisters of Our Lady of the Rosary in New Jersey. The Nov. 21 observances asks Catholics to pray for those who, like the Dominican nuns, pray for them year-round.