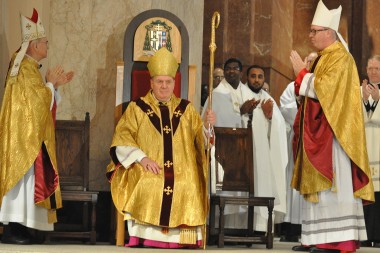 Archbishop Joseph W. Tobin sits for the first time in the cathedra of SS. Peter and Paul Cathedral in Indianapolis during the Dec. 3 Mass in which he was installed as the sixth archbishop of Indianapolis. Applauding Archbishop Tobin is Auxiliary Bishop Christopher J. Coyne of Indianapolis.

INDIANAPOLIS (CNS) — In the ancient Mediterranean world and in medieval Europe, a chair was the symbol of a teacher. In those cultures, teachers sat in chairs and their students sat at their feet to learn from them.

The Catholic Church continues this traditional symbol in the cathedra, the seat of a diocesan bishop in a local Church’s cathedral.

When Archbishop Joseph W. Tobin sat for the first time in the cathedra at SS. Peter and Paul Cathedral in Indianapolis on Dec. 3, he did so to teach Catholics of central and southern Indiana how to love and respond to Christ’s love for them.

In his homily during the Mass in which he was installed as the sixth shepherd of the Archdiocese of Indianapolis, Archbishop Tobin reflected on how St. Paul saw himself as obligated to preach the Gospel because Christ loved him first.

“And so, for us Catholics of central and southern Indiana, if someone asks us, ‘Why do you do what you do?’ it’s not simply because we’re obeying rules,” Archbishop Tobin said. “In fact, on at least four different occasions, I heard Pope Benedict XVI say that the Gospel cannot be presented first and foremost as a list of moral obligations.

“It is rather an encounter with a person, someone who has loved us first and someone who asks us to continue His loving presence in the world. And so all of us who belong to this particular Church are under an obligation — the obligation of love.”

Archbishop Tobin said that he and all the Catholics of the archdiocese are to express that love with the passion that drove St. Francis Xavier, a patron saint of the archdiocese whose feast day was Dec. 3, to preach the Gospel in India — halfway around the world from his home in Spain.

The archbishop, former secretary of the Vatican Congregation for Institutes of Consecrated Life and Societies of Apostolic Life, paid tribute to his predecessors in Indiana, starting with Bishop Simon Brute, a candidate for sainthood and the first bishop of Vincennes — which covered all of Indiana and a portion of Illinois when it was established in 1834.

In remarks at the end of Mass, Archbishop Tobin thanked Archbishop Buechlein “for laying a firm foundation and of being so gracious to me in our conversations and for his promise to be always a cellphone call away when I run up against implacable problems.”

Before the Mass, Archbishop Buechlein told The Criterion, the archdiocesan newspaper, that he was looking forward to witnessing the installation of his successor.

Before the start of Mass, more than a hundred priests and two dozen bishops processed into SS. Peter and Paul Cathedral, which was filled with more than 1,000 worshippers. Archbishop Carlo Maria Vigano, apostolic nuncio to the United States, was the principal celebrant.

The central ritual of the installation Mass was Archbishop Tobin taking his place in the cathedra, then representatives of various groups in archdiocese came up to greet him. They included a priest, a deacon and his wife, religious, a married couple, youths and young adults, representatives of the Hispanic community and people with special needs.

Also greeting Archbishop Tobin were a representative of the Indianapolis-based Christian Church (Disciples of Christ), an imam, a rabbi and various civic officials, including Indianapolis Mayor Gregory Ballard, who is Catholic.

At the conclusion of the Mass, Archbishop Tobin thanked Pope Benedict, who appointed him to Indianapolis Oct. 18, and Archbishop Buechlein and Auxiliary Bishop Christopher J. Coyne, other archdiocesan leaders and the Catholics of central and southern Indiana who have been praying for a new archbishop for months now.

“I thank you for those prayers,” Archbishop Tobin said. “And I ask that they continue.”

He also thanked his mother, Marie Tobin, and his 12 siblings. Archbishop Tobin then thanked his Redemptorist family. He first professed vows in 1973 in the Congregation of the Most Holy Redeemer, whose members are called Redemptorists.

“My brothers here know the full story. I trust that they’re not going to tell it,” said Archbishop Tobin with a smile. “But I thank you for teaching me to love the poor, and to assure that the Gospel is preached in season and out.”

Finally, Archbishop Tobin noted that, while he could not predict what would happen “in this great adventure of being the archbishop of Indianapolis. … Whatever the Lord holds for me, that’s fine. But I’m sure that I’m going to enjoy life with you, my brothers and sisters.”

Gallagher is a reporter at The Criterion, newspaper of the Indianapolis Archdiocese.