The work of the church: Near East and beyond

SOUTH BEND — Christopher Kennedy and Norma Intriago of the Catholic Near East Welfare Association will speak at St. Jude Parish on March 13, to discuss the work of their organization and the current plight of Christians in the Near East. The event will be held from 6:30-8:30 p.m. in the Keller Room after the 5:30 Mass. RSVP to 574-291-0570, Ext. 308 or [email protected] to help plan refreshment needs. 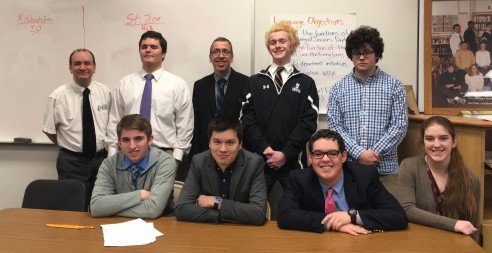 The Saint Joseph High School Quiz Bowl team defended its tournament title recently by defeating Riley High School 405-125 in the semifinal and Mishawaka High School 465-50 in the final, becoming South Bend city champions. The team swept through the league season and league tournament with a tally of 10-0. This is the sixth year out of the last seven that the team has finished undefeated. Team members will try for their fifth consecutive state title on April 22 at Ancilla College. Pictured in the front row, from left to right are team members Ryan Farrisee, Reed Oei, Tomas Aguilar-Fraga and Ashley Decker. In the back row are moderator Ben Dillon and team members Michael Hall, Jacob White, Gus Desch and Ben Culver. — Lisa Kochanowski

FORT WAYNE — Catholic Charities is now registering individuals to participate in citizenship classes that will take place over eight weeks and are structured to help individuals understand and prepare to take the test to become U.S. citizens. Classes will be held every Tuesday evening from 4- 6 p.m. at the Catholic Charities Fort Wayne office, 915 S. Clinton St.  Registration fee is $10. To register or for more information contact Bertha at 260-422-5625 ext. 282 or [email protected]

Presentation on the sufferings of Christ

ROME CITY — Dr. Tomas McGovern, a Fort Wayne physician, will use the Shroud of Turin as a guide to the wounds of Christ and speak to the death process from medical view point of view on Thursday, March 9, at the Our Lady, Mother of Mercy Chapel, 2730 E Northport Rd. Doors open at 5:30 p.m., Lenten dinner of soup, bread and water at 6 p.m., talk at 7 p.m. Graphic content: May not be suitable for young children. Tickets are free but seating is limited. Register by calling 260-303-4990. Free will donation will be accepted. 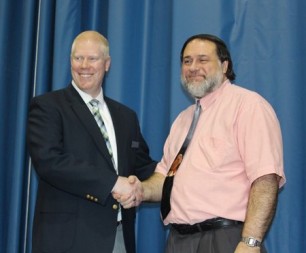 Ken Andrzejewski, a science teacher at Marian High School, Mishawaka, received the school’s 2017 Light of Learning nomination, but due to a presentation at a science convention, was unable to attend the South Bend Area Light of Learning Luncheon sponsored by Quality Dining on Feb. 2. He is pictured with Marian High School Principal Mark Kirzeder during a school recognition of his nomination. —Linda Waltz

SOUTH BEND — Forever Learning Institute is offering a course about pilgrimages. This class is for anyone who just wants to know more about this or any other pilgrimage and those interested in either walking or biking the Camino de Santiago in Spain. Those who have gone on the Camino and want to share their experiences are also invited to attend. This course will review and discuss the history of the Camino deSantiago with movies, books, photos, videos, blogs and documentaries about the Camino. There will be conversations about the pilgrimage experience discussing possible local pilgrimages. Participats will cover the how, where, when, who and why of pilgrimage and ask, are we all on a pilgrimage of life?

The class facilitator is Tom Labuzienski, who recently completed the Camino Santiago with his two oldest sons. The classes will be at Forever Learning Institute in the Little Flower Parish Center on North Ironwood Drive, Thursday mornings from 9-9:50 a.m., March 9 to May 11.

To register visit www.foreverlearninginstitute.org or call 574-282-1901.

About 200 newlywed couples in the Diocese of Fort Wayne-South Bend have received a special gift from their parish as they started their married life together: a Bible and a crucifix. Couples who marry at either Queen of Angels or Most Precious Blood parishes in Fort Wayne receive the gift set as a special memory of their wedding day that also serves as reminders of God’s love and promises throughout their marriage.

The project was the idea of Queen of Angels parishioner and Knights of Columbus member Norbert Sauter, who passed away in December.  In an email Sauter sent in July, he wrote: “Since 2007, Most Precious Blood has distributed 123 sets to newlyweds and Queen of Angels has distributed 72 sets for a total of 195 sets. That impresses even me, and I was involved at the beginning.”

According to his daughter, Pat Beckman, he felt strongly about the project. She remembered him saying, “There’s not a more wonderful way to start your marriage than to have your first wedding gift given to you by the church and it being a Bible and crucifix.” She also says that her father never wanted any recognition for his works, and added that “he just wanted to do the right thing and go from there.”

One of the newlywed couples who received the gift set was Shalei and Adam Beckman. Adam is Sauter’s grandson. When Adam and Shalei were married at Most Precious Blood, they received the two gifts from the pastor, who also blessed both items. Shalei said it was a surprise to receive them at the rehearsal dinner, and since they were both new to the Catholic faith, it held special meaning. “It was definitely a blessing, something that we were able to bring home and share with our family and enjoy,” she said.

The project was initially funded from a Christmas card sale. When those funds ran out, Sauter approached the Queen of Angels/Most Precious Blood Knights of Columbus Council 11043 for assistance. They agreed to help. Grand Knight Tom Schall remembered Sauter’s enthusiasm about the project, and the council continues to provide assistance.

To help keep the Bible and crucifix program going, donations can be sent to: Knights of Columbus Council 11043, 1515 Barthold St, Fort Wayne, IN 46808. For further information, send an email to [email protected] — Mariam Schmitz

Catholic Charities of the Diocese of Fort Wayne-South Bend announced Feb. 8 that it was awarded a grant of $532,507 from Senior Service America Inc. Almost 90 percent of this grant — originally from the U.S. Department of Labor — will provide temporary employment to at least 102 low-income older adults living in Adams, Allen, DeKalb, Huntington, Wabash and Whitley Counties. These older adults will participate in the Senior Community Service Employment Program, a major program of the Older Americans Act. SCSEP is the only federal government program mandated to assist unemployed older adults seeking to rejoin the workforce by working in their community.

“We are very pleased to continue our support of the Catholic Charities of Fort Wayne-South Bend for the 13th consecutive year,” said Tony Sarmiento, Senior Service America executive director. Catholic Charities has received this annual SCSEP grant since 2003. Senior Service America is the second-largest sponsor of SCSEP, after a national grant competition held this year.

“This program delivers a triple win for older adults and the whole community,” said Jen Zamaites, SCSEP program supervisor for Catholic Charities. “First, SCSEP participants are helping more than 30 local community, faith-based, and public agencies carry out their mission. Second, older workers are receiving on-the-job training to enhance their skills. And third, older workers are keeping healthy by remaining connected and not isolated in their community.”

“Many low-income older adults want and need paid work, said Donna Satterthwaite, Senior Service America director of Employment Services. “By serving their community, older workers receive renewed skills as well as renewed hope, knowing that they are not forgotten. der Hoosiers are fortunate to be given the opportunity through SCSEP and the dedicated staff of Catholic Charities.”