WASHINGTON (CNS) — Pope Francis’ U.S. visit — Sept. 22-27 — was so full, “each day was like a week,” said the president of the U.S. Conference of Catholic Bishops. Any one of his public events would have made the trip worthwhile, said Archbishop Joseph E. Kurtz of Louisville, Kentucky, but he noted that what will stand out the most from the visit were the pope’s “personal opportunities to be with people that are not the influential, but the forgotten.”

The archbishop, in a Nov. 18 interview during the bishops’ fall meeting in Baltimore, said the pope brought Catholics together with a “sense of fervor and enthusiasm” that will continue to benefit both the U.S. Church and the pope, who was “encouraged by his interaction with us.”

Pope Francis talked about how much he enjoyed the U.S. visit right away: during his Sept. 27 return flight to Rome after six jam-packed days in Washington, New York and Philadelphia on the heels of his four-day visit to Cuba. He told reporters he “was surprised by the warmth of the people” in the U.S. and how they were “so loving.” There was certainly plenty of love on display for the pope in crowds that lined streets in Washington, New York and Philadelphia just to catch a glimpse of him.

And he returned the love right back, waving from the popemobile or the black Fiat and personally greeting bishops, schoolchildren, prisoners, the homeless and abuse victims or in celebrating liturgies and addressing massive crowds or congressional leaders and U.N. officials. 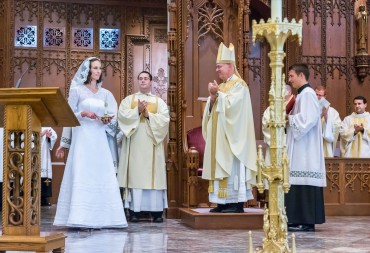 Jessica Hayes dedicates her life as a consecrated virgin at the Cathedral of the Immaculate Conception on Aug. 15.

• Pope Francis visits Sri Lanka and the Philippines in January

• University of Saint Francis closes 125th year anniversary in May

• Ave Maria Press celebrates 150 year of publishing in May 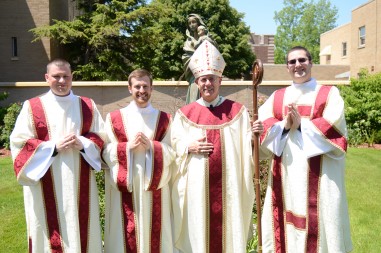 • St. Mary of the Assumption Parish in Decatur closes its 175th anniversary in August

• St. Stanislaus Parish, South Bend, becomes a personal parish serving the faithful who worship according to the extraordinary form of the Latin rite on Sept. 8 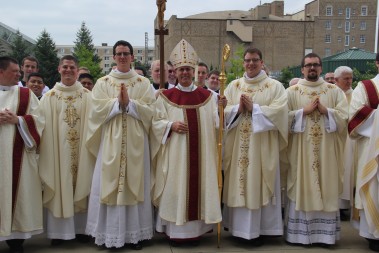 Ordained to the Holy Priesthood were Fathers Jonathan Norton, Royce Gregerson, Bill Meininger and Matt Soberalski at the Cathedral of the Immaculate Conception in Fort Wayne on June 6.

• Pope Francis canonizes Louis and Zelie Martin, the parents of St. Therese of Lisieux, on Oct. 18

• Doors of Mercy open Dec. 13 at the Cathedral of the Immaculate Conception, Fort Wayne, St. Matthew Cathedral, South Bend, and the Basilica of the Sacred Heart, Notre Dame

• Now through Nov. 20: Pilgrimage through the Doors of Mercy at the Cathedral of the Immaculate Conception, Fort Wayne, St. Matthew Cathedral, South Bend, Basilica of the Sacred Heart, Notre Dame

• Deacon Ordination, Cathedral of the Immaculate Conception, May 21, 11 a.m.