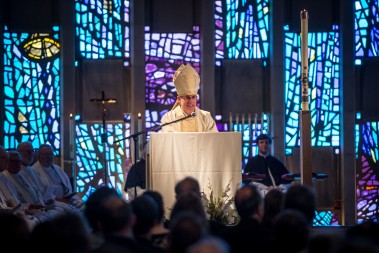 The following is the homily given by Bishop Rhoades at the Mass celebrating the 150th anniversary of Ave Maria Press on May 1st at Moreau Seminary, Notre Dame:

On this day, May 1st, in the year 1865, the first edition of the family magazine, The Ave Maria, a weekly periodical devoted to the Blessed Virgin Mary, was published. That was before May 1st was designated by the Church as the feast of Saint Joseph the Worker. But it seems appropriate that today we celebrate the Mass of Saint Joseph the Worker as we celebrate the holy work of Ave Maria Press, 150 years of work for the Church, the work of evangelization and catechesis, the work of promoting devotion to the Blessed Mother, the work of providing good Catholic reading, a work that continues today. As we celebrate this publishing work that is under the title of the Blessed Virgin Mary, it seems appropriate that we do so on this feast of her spouse, Saint Joseph, the patron of workers. We ask Jesus, the one known as the carpenter’s son, as we heard in today’s Gospel, to continue to bless the work of Ave Maria Press.

Saint Paul wrote to the Colossians: Whatever you do, in word or in deed, do everything in the name of the Lord Jesus, giving thanks to God the Father through him. These words are good for all of us to ponder as we consider our daily work. Certainly, these words express the attitude Father Edward Sorin had in founding the Ave Maria as well as Notre Dame.

With the spirit of parrhesia (boldness) typical of him, Father Sorin began the venture of the Ave Maria magazine despite many naysayers who thought the project would fail. But Father Sorin was determined to honor the Blessed Virgin through this periodical. He wanted to encourage Marian devotion. He was resolute in moving forward because he felt that there was a great need to provide this publication for the Catholic faithful, mostly immigrant and poor, living in a dominant Protestant culture. He wanted them to have the spiritual sustenance that the Blessed Mother provides. A few months before the first publication, Father Sorin wrote to Neal Gillespie the following: I may be deceived, disappointed, laughed to scorn, but with all that I will still retain my conviction that the Ave Maria will be the source of most abundant blessings, one of the best things ever done in the Congregation, and ultimately a glorious work for our Blessed Mother.

I don’t think the rather quick and early success of the Ave Maria endeavor would have happened without the support and work of the Holy Cross brothers and sisters, especially Mother Angela Gillespie at Saint Mary’s. This strong, well educated, cultured and faith-filled woman, having just completed her great service of the wounded and dying in the Civil War, did so much to make the Ave Maria a success. Mother Angela was the actual director of the new magazine in those early years. She solicited the essays and articles and discerned what should be published in each issue.

Mother Angela Gillespie also oversaw the sisters who did the typesetting and layout of the magazine. She worked hard to assist Father Sorin, the editor, in making the Ave Maria the most popular and most read Catholic periodical in the country. Father Sorin once said that Mother Angela is a person whom heaven blesses in everything she touches. And she certainly touched the Ave Maria enterprise. I recently learned that my predecessor, the first bishop of Fort Wayne, John Henry Luers, whose native language was German, sent an article or essay to be inserted into the Ave Maria. In doing so, he said to Father Sorin, if my English is not correct, let Mother Angela rectify it.

Though I am focusing on the early years of Ave Maria Press, we should also remember today all those who continued the work of Father Sorin and Mother Angela through the past century and a half. I think, for example, of Mother Angela’s younger brother, Father Neal Gillespie, who succeeded her as the behind-the scenes editor of the Ave Maria, and all the Holy Cross priests, brothers, and sisters through the years, as well as all the devoted lay people who continue this Holy Cross apostolate.

On this memorial of Saint Joseph the Worker, when the Church reflects on the value and meaning of human work, it is good for us to remember that work honors the gifts of God our Creator and the talents we receive from Him. All of you who work for Ave Maria Press and support its work are collaborators with Jesus in His redemptive work. As disciples of Jesus, we are all called to holiness by doing the work He calls us to accomplish, by doing our work with dedication and love. The Church teaches that work can be a means of sanctification and a way of animating earthly realities with the Spirit of Christ (CCC 2427). This happens by being industrious, using our talents for the glory of God and the good of others.

On this anniversary and as we look to the future, we ask the Lord’s blessing on the work of Ave Maria Press. We move forward with the counsel of Saint Paul in our minds and hearts: Whatever you do, in word or in deed, do everything in the name of the Lord Jesus, giving thanks to God the Father through him. And we move forward, asking the intercession of Saint Joseph the Worker and his most-holy spouse, our Blessed Mother. With the angel Gabriel, we say Hail Mary, Ave Maria. Like Father Sorin, we entrust this work to Jesus through Mary; we entrust Ave Maria Press to Our Lady. May the mother of the carpenter’s son who is the Son of God pray for us!