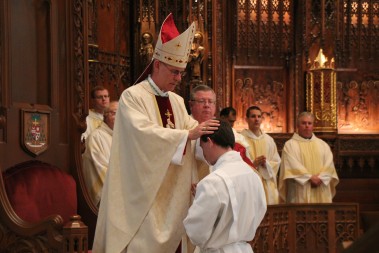 Bishop Kevin C. Rhoades lays his hands on the head of Zachary Barry in accordance with the apostolic tradition. Barry was ordained to the Sacred Order of the Diaconate on Saturday, May 25, at the Cathedral of the Immaculate Conception in Fort Wayne.

FORT WAYNE — “The harvest is abundant, but the laborers are few; so ask the Master of the harvest to send out laborers for His harvest,” Bishop Kevin C. Rhoades said as he opened his homily at the Mass of Ordination to the Sacred Order of the Diaconate of Zachary Barry. “These words of Jesus are as true today as they were 2,000 years ago. The harvest is still great, still plentiful. There is a great need in the world today and in our diocese for the spread of the Gospel, for the work of evangelization.”

Bishop Rhoades ordained Barry to the order of the diaconate on May 25 at the Cathedral of the Immaculate Conception in Fort Wayne. He will minister for a year as a deacon before his ordination to the Priesthood on June 7, 2014. This summer, Deacon Barry will serve at St. Michael the Archangel Parish in Plymouth.

“We thank God that Zak has said ‘yes’ to this call, a ‘yes’ to serve the people of God in the Diocese of Fort Wayne-South Bend as a minister of God’s Word and an agent of His mercy and love,” Bishop Rhoades said.

“Zak has been called to the priesthood of Jesus Christ and today will be ordained a deacon,” he said. “So many in our diocese have prayed and continue to pray the Master of the harvest to send out laborers into His harvest. Those prayers are answered each time a man is ordained and sent out by Jesus, through the bishop, to be a teacher of the faith, a herald of hope, and a minister of charity in our diocese.”

“Zak will help countless people in their search for truth and meaning and joy in the journey of life as he points them to Jesus, the way, the truth and the life,” Bishop Rhoades added. “Like Jesus, Zak will proclaim the Gospel of the Kingdom and he will lead others to encounter the living God, His healing, and His merciful love.”

“How beautiful it is today to witness Zak’s promises that express the dedication of his life completely to the work of the Lord, the mission of redemption, the ministry of service as a worker for His harvest,” Bishop Rhoades commented.

“Through the sacrament of Holy Orders, Zak will receive new strength from the gift of the Holy Spirit,” the bishop said. “As a deacon, he will help me and our priests as a minister of the Word, of the altar and of charity. Like the deacon Philip in the Acts of the Apostles, he will instruct people in the Word of God and will baptize.”

Bishop Rhoades spoke about Pope Francis’ words on Pentecost Sunday. The Holy Spirit “impels us to open the doors and go forth to proclaim and bear witness to the Good News of the Gospel, to communicate the joy of faith, the encounter with Christ,” the pope said.

Bishop Rhoades added that the pope said, “it is the Paraclete Spirit, the Comforter, who grants us the courage to take to the streets of the world, bringing the Gospel. The Holy Spirit makes us look to the horizon and drives us to the very outskirts of existence in order to proclaim life in Jesus Christ.”

“Zak, you will be ordained, strengthened by the Holy Spirit, to do what the Holy Father is asking of the whole Church: and especially as a deacon and later a priest of the Church: to be committed to the New Evangelization,” Bishop Rhoades said.

Bishop Rhoades encouraged Barry to make prayer a priority and invited him to ask the Blessed Virgin Mary to guide him every day of his ministry.

The Rite of Ordination itself is rich with meaning and symbolism. After the chanting of the Gospel, came the Election of the Candidate, whereby the candidate is formally chosen for ordination and becomes referred to as the elect. The candidate was presented to the bishop by Msgr. Bernard Galic, pastor of St. Aloysius, Yoder, and diocesan vocation director. Monsignor Galic testified to his worthiness, after which Bishop Rhoades formally accepted Barry to be ordained as deacon.

After the homily, the elect declared his intention to assume the responsibility of the office of deacon, and promised obedience and respect to Bishop Rhoades and his successors. During the Litany of Supplication, the candidate laid prostrate on the sanctuary floor of the Cathedral of the Immaculate Conception while the intercession of the Saints and Angels was invoked.

After the litany, Bishop Rhoades laid his hands on the head of the elect in accordance with the apostolic tradition. Then, with the elect kneeling and with hands outstretched, Bishop Rhoades solemnly recited the Prayer of Ordination.

The newly ordained was then invested with the stole and dalmatic — the proper liturgical attire of the diaconate. He was also handed the Book of the Gospels, symbolizing the task of the deacon to proclaim the Gospel in liturgical celebrations and to preach the faith of the Church in word and deed.

Bishop Rhoades then bestowed the traditional liturgical gesture known as the fraternal kiss of peace, and thereby welcomed the new deacon into their ministry. The other deacons present also welcomed the newly ordained.

At the closing of the Mass, Bishop Rhoades gave thanks to all who had a hand in making the day so meaningful. Bishop Rhoades then turned to Deacon Barry and teased him amid the laughter from the congregation about what he would call him — Deacon Zachary or Deacon Zak — before thanking him for his compassion for all people and his dedication to prayer.

Following the Mass, the Barry family and their friends gathered to congratulate their son on the steps of the cathedral. Vince and Becky, the newly ordained Deacon Barry’s parents, agreed that this day was filled with excitement and special meaning. “It’s becoming more real,” remarked Vince, adding that it was a blessing to be present in the cathedral for this extraordinary day. “I want to be present and allow God’s will to take shape,” he said.

Vince’s mother, Kathy Barry, who is Deacon Barry’s grandmother, said the Mass was “awesome!” and added, “It’s thrilling to be the grandmother and see my grandson!”

When asked how he felt about his ordination into the diaconate, Deacon Barry simply said, “Blessed.”

Kay Cozad contributed to this story.