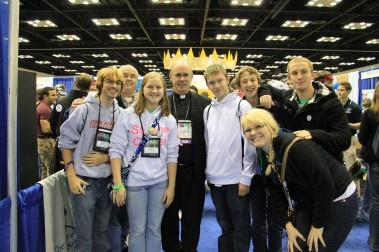 INDIANAPOLIS (CNS) — More than 2,000 years after His birth, Christ the King was honored in a historic way with a massive electronic “holy shoutout” via texts, emails and tweets sent simultaneously from cellphones Nov. 19 by 23,000 participants at the National Catholic Youth Conference and National Catholic Collegiate Conference.

It was a fun and faith-filled way for the Catholic youths and young adults to honor God and conclude the 31st biennial national conference, held Nov. 17-19 at Lucas Oil Stadium in Indianapolis.

Bishop Christopher J. Coyne, apostolic administrator of the Archdiocese of Indianapolis and host of the conference, asked the teenagers, collegians and all attending the closing Mass to text, email or tweet the words “Called to Glory,” the conference theme, to family members and friends throughout the U.S. at the conclusion of the vibrant liturgy.

Murmurs began to spread through the quiet otball stadium when Bishop Coyne surprised the conference participants by asking them to turn on their cellphones at the end of Mass.

“For over two hours now, we have turned this space into a holy place where holy people have listened to holy words and done holy things and received holy gifts,” Bishop Coyne said.

“I want you all to dig out your cellphones, … and turn them on because we’re going to do a holy shoutout. I don’t think this has ever been done … with a crowd like this, and maybe the first time at a big Catholic gathering. I want you to type in ‘Called to Glory.’”

After he announced the “holy shoutout,” the teenagers, collegians and others in attendance quickly typed in the words then awaited his cue to press the “send” button on their cellphones. 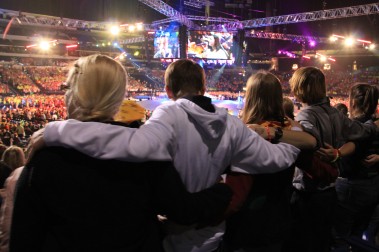 Shown at the closing ceremonies of the National Catholic Youth Conference at Lucas Oil Stadium in Indianapolis are, from left, Briana Konkle, Adam Coyne, Amanda Fontenot and Patrick Sweeney.

“When I say, ‘We are …,’” Bishop Coyne told them, “we are going to shout out ‘Called to Glory’ and you’re going to send it out to all those people out there on the Internet that are watching us and all the people we love. We are going to spread that greatness to the call to glory. Are you ready? We are … called to glory!”

Jacqueline Jackson-Morant from the Archdiocese of Detroit sent her “Called to Glory” message to her mother, siblings, grandmother and aunt.

“It was a great conference,” she told The Criterion, the Indianapolis archdiocesan newspaper. “I loved it. I’m blessed to be here today, and I’d like to come again in 2013. I liked seeing all the bishops and priests and deacons.”

Bishop Coyne was the principal celebrant for the closing Mass, which was concelebrated by eight bishops and 250 priests from throughout the country.

Thirty deacons and 175 seminarians from many dioceses also participated in the Mass with talented teenage lectors and music ministers.

“It’s just wonderful to be gathered here tonight with all 23,000 of you,” Bishop Coyne told the gathering at the start of the liturgy, “and welcome you on behalf of the entire Catholic community here in Indianapolis. It’s been a glorious three days, and it’s going to be a glorious celebration of the Mass.”

Bishop Coyne’s homily focused on God’s call to service and charity, and included a visual aid and joke.

He held up a poster-size image of his bishop trading card — conference organizers created trading cards, designed like baseball cards, for several bishops in attendance.

Bishop Coyne joked that he wanted to order copies of his card for all of the parishes in central and southern Indiana. Then he got serious about the need to live a faith-filled life that honors God.

Popular culture wants people to believe “the idea that ‘it’s all about me,’” Bishop Coyne said, “the idea that what I need is the only thing that matters. … That’s what gets us in trouble.”

God calls us to choose what is right and good, and to reject what is sinful and wrong, he said, instead of acting on our selfish needs and desires in daily life situations.

Heather Coyne, a mother and chaperone from Christ the King Parish in South Bend, told Today’s Catholic, “As a parent, my personal favorite was the closing Mass — 175 seminarians, 10 deacons, 230 priest and eight bishops, along with the 23,000 teens plus their chaperones. The processional took longer than Communion for 25,000 people. As the priests and bishops left the stage, everyone was singing then cheering, and the kids near their path were high fiving them like they were rock stars. It was amazing. A great example of all that is good in the world with that age group.”

Adam Coyne, a sophomore at Saint Joseph’s High School in South Bend, told Today’s Catholic, “I went to NCYC in Indianapolis, and I think it was a really good experience. I learned a lot about my faith, and had fun doing it.”

“The activities were specially designed for teens. We were constantly involved, had fun, met a ton of new people, and it was not confined to a small space, as everyone had options as of what to do depending on their interests,” he said. “It was great to be with 23,000 Catholic teens from all over the country. It is mind-blowing to see how many people share your values.”

Patrick Sweeney, of Christ the King Parish in South Bend said, “NCYC was an experience that made me look at my faith in a totally different way. I used to be on the fence about whether God even existed, but no matter how cheesy it may sound, NCYC helped me believe again. The experience helped me rekindle my faith and my trust in God.”

Sean Maxwell, another parishioner of Christ the King, said, “Before NCYC I would never imagine what could be possible from such a large number of people. I would have never thought that so many people could be in a single place and all focus on one single idea, that is the love of God.”

Bishop Dale J. Melczek of Gary, Ind., does the “sizzle” following Mass with youths from the Diocese of Gary during the National Catholic Youth Conference at the Indiana Convention Center in Indianapolis. More than 25,000 Catholic youths and their adult c haperones were on hand for the biennial conference, a three-day experience of prayer, community and empowerment for Catholic teens.

The photo shows the inside of Lucas Oil Stadium at the National Catholic Youth Conference in Indianapolis.

Those attending the National Catholic Youth Conference gather outside Lucas Oil before the closing ceremonies. The interaction between the teens from different parts of the country was electric.

Attendees of the National Catholic Youth Conference from the Diocese of Fort Wayne-South Bend are shown in this photo.