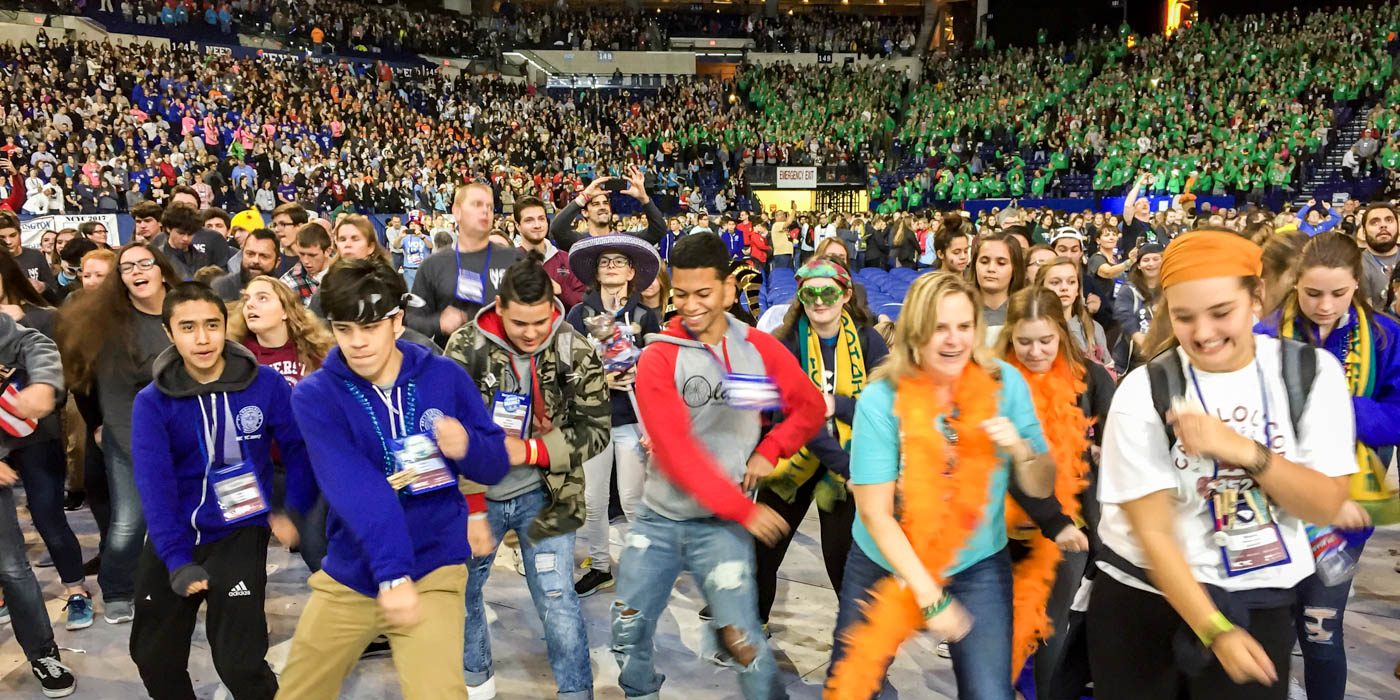 INDIANAPOLIS (CNS) — The sound of more than 20,000 teens screaming and singing along with raucous music of Christian hip-hop band TobyMac was loud.

The sound of the same number of youths in silent prayer was deafening.

These external and internal forms of praise formed bookends to the opening general session of the National Catholic Youth Conference Nov. 16 at Lucas Oil Stadium in Indianapolis.

After two hours of music, entertainment — including cultural dancing by the Vietnamese Eucharistic Youth Movement — and an entrance procession of banners from each diocese present, the participants were greeted by Indianapolis Archbishop Charles C. Thompson.

Although each person came “from many dioceses, many states … and with many titles,” he said, “we are first and foremost children of God. And that God who knows us desires to be known by us. … God wanted us to know him … through a personal relationship with a human being, our Lord and Savior Jesus Christ.

“We are beloved children of God, called by name, claimed by Christ,” he continued, referring to the conference theme of “Called.” “We begin this NCYC weekend by embracing that reality of who we are.”

Chris Stefanick, an internationally acclaimed author, speaker and founder of Real Life Catholic, used humor and life experience to speak about the reality of who we are and of God’s love for each person.

He spoke of the “love story” upon which the Catholic faith is founded.

That story, he said, “begins very simply with the words ‘(I) believe in one God.’”

So many youths today chose not to believe, he said, including an atheist who once told him that belief that God created the universe “is as stupid as a kid coming down on Christmas morning and, seeing presents under the tree, thinks, ‘There are presents, therefore there must be a Santa..’”

“You say there’s no God?” Stefanick asked. “That’s like a flea not believing in the dog. That’s like a kid coming down on Christmas morning and seeing presents under the tree and saying, ‘Oh look! Presents! They must have exploded themselves here!’ … Just so, the universe did not put itself here, and the more we learn about the universe, the more it shouts to us about the existence of God.”

And because God’s love created us, he said, no other form of love will satisfy.

“We feel so small in this world,” he told the crowd that came from as far away as Hawaii and Alaska. “We feel so insignificant in this universe.

But because of human rejection of God, Stefanick continued, sin and brokenness entered the world. To applause and shouts of “Amen!” he modified the words of John 3:16 to note that therefore, “’God so loved you that he gave his only Son.’ Whoa. …”

This love story — which continues in the sacraments, Stefanick noted —”doesn’t just show you who God is. It shows you who you are.”

He encouraged the crowd to use their will to “say ‘yes’ to the love that created space and time and perpetually invites us to Himself.” 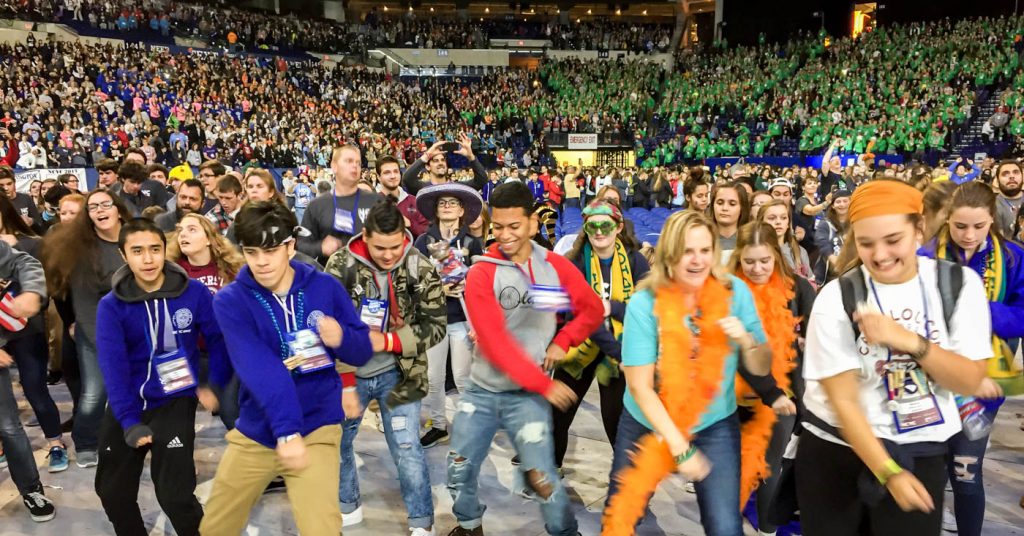 After the closing Mass for the National Catholic Youth Conference at Lucas Oil Stadium in Indianapolis Nov. 18, young people from different dioceses perform a dance they learned during conference. The biennial conference draws some 20,000 Catholic teenagers from across the country.(CNS photo/Natalie Hoefer, The Criterion)

Father Joseph Espaillat, a priest of the Archdiocese of New York, who was one of the evening’s emcees, led the more than 20,000 present through a period of silent prayer to close. He suggested using the word “pray” as an acronym to guide their prayer — “P” for praising God, “R” for repenting of sins, “A” for asking God for needs rather than wants, and “Y” for yielding to his will

It was this prayer time more than any of the evening’s other events that most affected Abby White of the Diocese of Covington, Kentucky.

“I thought it was really powerful,” she said of the quiet time. “I like saying that you’re sorry to God. It’s been awhile since I’ve been to confession, and I really want to go to confession this weekend. I felt like that [prayer time] empowered me to want to go.”

While Abby has attended NCYC before, Garrett Randel of Seneca, Kansas, was exuberant with the joy of one experiencing the event for the first time.

Caitlin Dusenbury of the Diocese of Lansing, Michigan, couldn’t agree more. The NCYC first-timer’s eyes lit up and a smile brightened her face when she spoke of her experience that evening.

“I really like it so far,” she told The Criterion, newspaper of the Indianapolis archdiocese. “It’s impacted me a lot. I’ve never seen so many Catholics together.

“The highlight for me was Chris speaking. ‘It’s not who you are, but whose you are’ — that quote stuck with me.”

Natalie Hoefer is a reporter at The Criterion, newspaper of the Archdiocese of Indianapolis.