SURFSIDE, Fla. (CNS) — After girding themselves with eucharistic adoration, rosary, songs and reflections, the teens, young adults and parish community of St. Joseph stepped out into the night air to solemnly walk to Surfside’s new ground zero.

For three hours — and all the way until midnight — the participants in the June 26 prayer vigil, organized in response to the Champlain Towers South partial collapse, turned their thoughts heavenward: 12 parish families were affected by the tragedy, eight of whom remain missing.

As of June 29, 11 people were confirmed dead and about 150 others were missing.

The death toll from the tragic collapse could end up on par with that of the 1995 bombing of a federal building in Oklahoma City if few or no more victims are rescued from the dismal scene of rubble being televised around the world. In that earlier tragedy, after a two-week rescue effort ended, the fatalities numbered 168.

Fires, winds and intermittent heavy rains have hampered an already logistically challenging rescue effort after the collapsed towers’ floors piled up on themselves in a pancakelike fashion.

On June 27, St. Joseph Parish released a list of registered members who had lived in Champlain Towers South, and church leaders pointed out that many others who lived there were likely informally associated with the parish.

The area is popular with tourists and international visitors to Miami Beach, Florida.

“This was definitely a shock, but it is bringing people together in prayer; there has been a lot of people coming here to donate things,” said George Sanchez, parish youth ministry leader and a resident of the Allapattah neighborhood in Miami.

“Our pastor (Father Juan Sosa) wanted the youth to be present and of course we responded with generosity, and we put together the best we could since this is the parish nearest the disaster and it is a place where people can come and pray and be with others who support them,” Sanchez said. “It is just a space we are creating for anyone who wants to come and pray for their loved ones and to incite hope.” 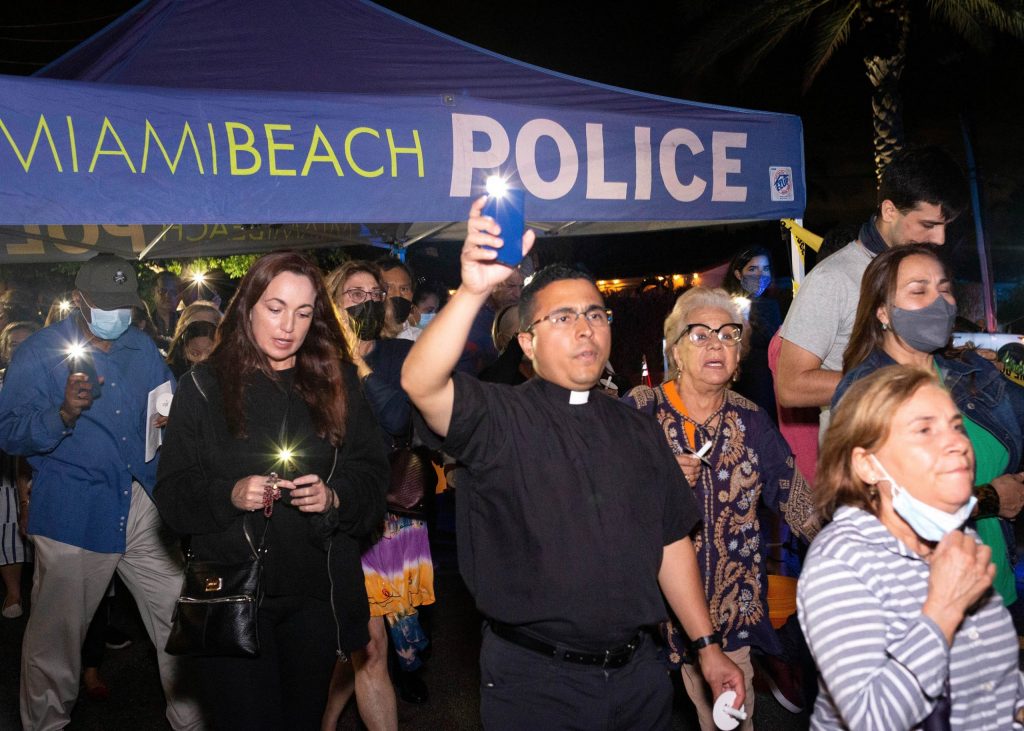 Father Jose Arroyo of the Diocese of South Bend-Fort Wayne, Ind., joined St. Joseph Parish in Miami Beach, Fla., and the parish youth ministry for a eucharistic prayer and candlelight vigil for those who have died and who are still missing June 26, 2021. The evening included a walkthrough of the neighborhood close to the site of the partially collapsed condo in Surfside, Fla. (CNS photo/Tom Tracy, Florida Catholic)

Judith Montalvan, another of the parish youth leaders and a pilgrim to Panama’s Worth Youth Day event in 2019, said the young people publicized the prayer vigil on Instagram and every other social media platform they could think of “so that it would get to the people who need it most at this time.”

“We do know that families from our parish are (missing), so we are just praying and hoping still to have faith that they might be (OK),” Montalvan told the Florida Catholic, newspaper of the Archdiocese of Miami.

“This is a kind of supervised space for people to come and be with God,” she said. “I think in these moments when disasters happen, the one thing we know for a fact is that God is with us, and providing those spaces for people to come feel closer to Him in a moment when we feel so alone and scared and all these negative emotions.”

The youth brought with them items and symbols of the fire and rescue, law enforcement and medical communities and placed them around the altar along with donations of flowers.

Carrie Barillas, a member of the pastoral staff at St. Joseph who helped organize the event, said the parish has been inundated with calls of support and people wishing to assist in some way.

“We have had an outpouring of calls over the last three days of people wanting to know about the families and asking what they can do; the parish community has really responded very well,” Barillas said.

“There is so much chaos, if you will, with so many calls and trying to get everything organized and provide spiritual support for those who need it,” she added. “It is an experience you don’t want to have to go through because it is sad, but at the same time you live the joy that Jesus gives us (and) the strength to console and comfort others.” 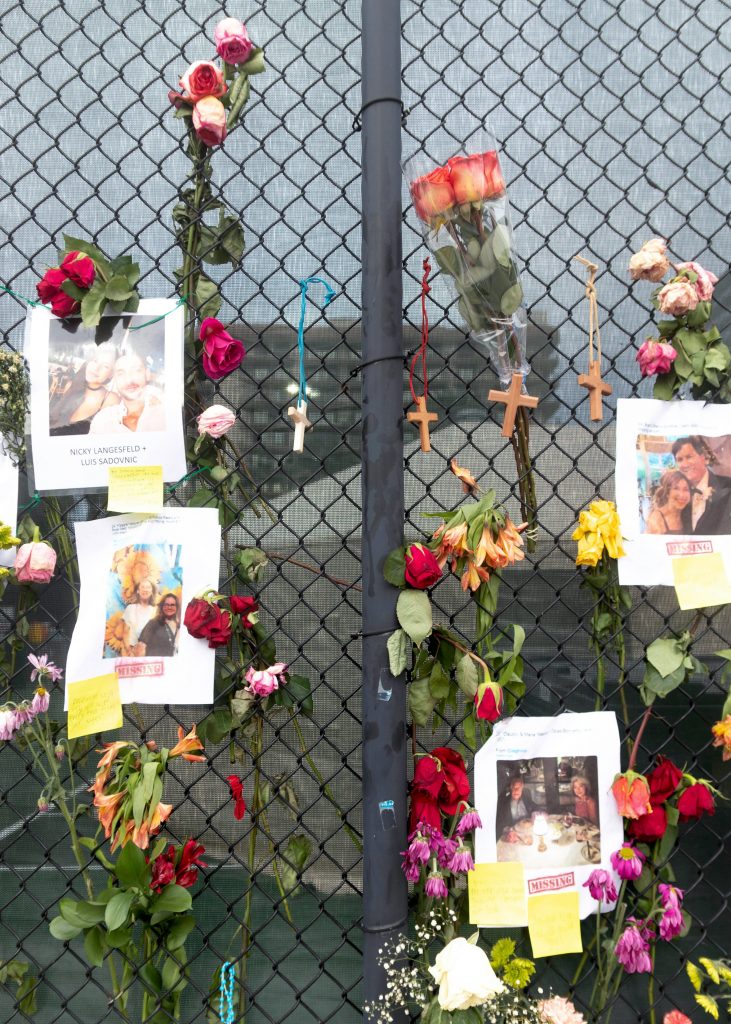 A makeshift memorial for those who have died and who are still missing in Surfside, Fla., is seen June 26, 2021, near the site of the partially collapsed condo building. (CNS photo/Tom Tracy, Florida Catholic)

St. Joseph Parish’s grounds are serving as a kind of hub for both the media and the emergency crews parking their vehicles here. The area is experiencing a constant and growing presence of the curious passing by outside along with law enforcement trying to manage the situation.

The best part of the prayer vigil was the participation of the parish youth, according to Father Juan Rumín Domínguez, parochial vicar at St. Joseph who helped lead the prayers.

“We want to say to our community that Christ is our light, the light of hope in the middle of this difficult situation,” the priest said. “We will pray for the victims and their families and especially we want to transmit our faith and hope in this situation; it is the thing we have to do as Catholics.”

“The rescue workers are working there but this is our language: prayer, and we are praying for them,” Father Dominguez added.

Deacon John Ermer also helped lead the eucharistic adoration. He gave a reflection in which he said the community should keep in mind those individuals who may question their faith as a result of the tremendous crisis.

“Some will find a loss of faith in the situation, wondering how could God let something like this happen, and that is a natural question for us,” he told the congregation June 26.

“We know that God challenges us with hardships throughout our lives. I think we need to pray twice as hard for people who ask that question because it is times like this, facing such tremendous loss, we have to make a decision,” Deacon Ermer said.

“For those of us who are weak, we may turn away from God and be lost forever,” he said. “Let’s pray especially for those people tonight whose faith is under tremendous pressure and who are questioning their faith.”

Tracy writes for the Florida Catholic, newspaper of the Archdiocese of Miami.