WASHINGTON (CNS) — The continuing COVID-19 pandemic and strict restrictions intended to slow its spread did not stop young people and others from rallying, praying and standing up for life Jan. 29.

As it has done for nearly 30 years, the Archdiocese of Washington hosted its regular “Rally and Mass for Life” prior to the annual March for Life. However this year, because of the ongoing pandemic, the D.C. event was virtual, with no traditional large in-person gathering at the Capital One Arena.

The 48th annual March for Life, which marks the anniversary of the 1973 Roe v. Wade decision legalizing abortion, also was primarily virtual.

Using YouTube and other social media platforms, young people from across the country — and as far away as Australia — “gathered” for the rally and Mass at the Cathedral of St. Matthew the Apostle in Washington.

The event — which included a recitation of the rosary, talks, musical performances and reflections — was hosted by the Archdiocese of Washington Youth Leadership Team.

“I hope it is a joyful time for all those who are participating virtually. Our young people bring with them an energy that is life-giving,” Washington Cardinal Wilton D. Gregory said. “I hope we realize as we do this from a distance that we are really close and united.” 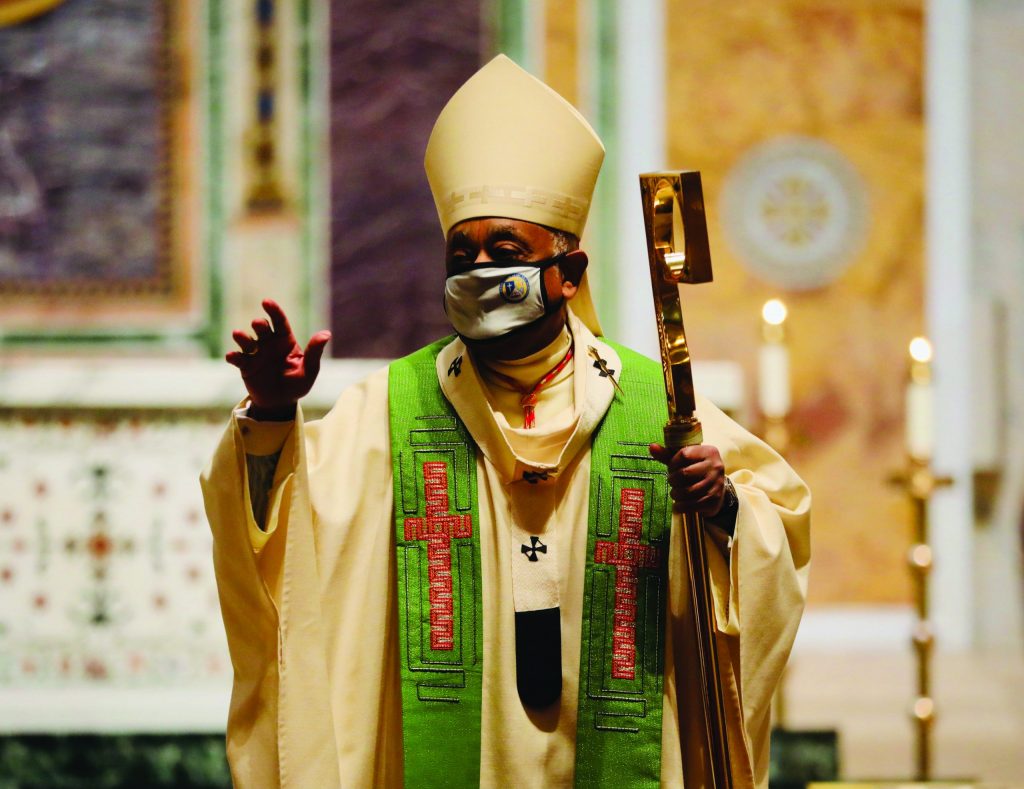 Cardinal Wilton D. Gregory of Washington waves after celebrating a Mass for Life at the Cathedral of St. Matthew the Apostle in Washington Jan. 29, 2021. The Mass and a youth rally were held before the annual March for Life. Because of the ongoing pandemic, the D.C. event was held virtually and livestreamed across various social media platforms, as was the national March for Life. (CNS photo/Andrew Biraj, Catholic Standard)

He asked young people to be “persistent in highlighting the importance of human life.”

“Our young people know how to use social media and I ask them to use it effectively, persistently and consistently to flood (it) with the truth and do it in such a way that the truth is undeniable.”

He also asked young people to pray because “we are people of faith, and we have to anchor whatever we do in prayer. If our prayer is sincere, we will be successful.”

Prior to the start of Mass, Archbishop Pierre noted that rallying, praying and marching for life is “so important because life is a gift from God. We do not possess life, we receive it and we have to be careful about it.”

Reading a message from Cardinal Pietro Parolin, Vatican secretary of state, issued in the name of Pope Francis, Archbishop Pierre said: “His Holiness trusts this generous public witness to the deepest conviction of our faith will contribute to fostering a culture of life.”

Speaking to “my dearest young sisters and brothers in Christ,” Cardinal Gregory during his homily reminded those virtually attending the Mass of “the inalienable value of human life at every moment of its existence. The word of the God exhorts us that it is no longer fashionable to hate — and it never was.”

“For 48 years, regrettably the people of our nation have been given all types of deceptive excuses to continue our dreadful practice of killing infant children within the womb,” Cardinal Gregory said.

“Various people have called it merely a choice, others claim it as a human right, some have defended it as a personal decision,” he continued. “A few even suggest it as just a womanly act of self-determination — anything to keep from accepting God’s standard of respect and love for every human life — even that which is waiting to be born.”

He said that society has found itself “hopelessly mired” in other “acts of brutality” against the terminally ill and aged, immigrants and prisoners “who may have committed heinous crimes, but are still human beings.” Assisted suicide and support for capital punishment, he added, also are attacks against life.

“We continue to pursue unspeakable human brutality against other people with whom we might disagree,” he said. “We look for any grounds to avoid the divine standard of respect for every living person. Yet we are called to a standard that dares to demand that we become perfect, just as our heavenly Father is perfect.”

Referring to the beatitudes as “categorically the greatest and most enduring transformation in standards that any of us will ever be asked to accept,” Cardinal Gregory said that Jesus’ words call the faithful “to a new standard, a higher standard, a divine standard — and one that will not pass away as ever being outmoded or obsolete.”

“The beatitudes are the new standards that dare to suggest that we are to view life itself and our opinions about other people in a different way,” he said. “These new standards are even so revolutionary as to propose that no life, no person, and no class of people are beyond our love and respect.”

The cardinal stressed that “there is no such thing as an inopportune life or a reason, no matter how grave, no matter how serious, no matter how convincing that renders any life useless and deserving of hatred or destruction.”

“Let us pray for a widely accepted way of viewing and valuing all human life — God’s way — an old fashioned yet perfectly contemporary way of seeing every life as sacred, holy, and inalienable.”

At the end of the Mass, Cardinal Gregory also asked young people to consider a religious vocation because “the Church is in need of joyful, energetic holy men and women.”

“If the Lord is calling you to a vocation, please say ‘yes.’ We need you,” he said.

The youth rally prior to the Mass focused on training young people how to engage in civil dialogue and pro-life apologetics.

In a series of videos, he taught “three essential skills” for presenting a pro-life argument: asking clarification questions then responding with your own thoughts, listening to understand and find genuine common ground when possible; and making a compelling argument for the rights of the unborn.

Szczepanowski is managing editor of the Catholic Standard, newspaper of the Archdiocese of Washington.