“All of us hit these walls when we leave these big events,” the well-known Catholic speaker and youth minister from Louisiana said. “We don’t know how exactly to take what we’ve heard, take what we’ve felt and articulate it in a way that is engaging, that is dynamic and that actually moves somebody to want to know and love Jesus.”

NCYC planners recognized the phenomenon, too. Addressing a packed hall in the Indiana Convention Center Nov. 23 during NCYC, Prejean McGrady recalled an NCYC committee meeting she attended some time ago.

“The thought was, what if we went deeper with the young people who were ready to go deeper?” she said.

“A lot of NCYC is introductory. But NCYC is such an on-ramp for so many people who want to go deeper in faith.”

Prejean McGrady said the committee asked, “What does it look like when you take a couple thousand of you, throw you in a room and actually equip you to go and be vibrant, visible witnesses to the Gospel of Jesus Christ?” 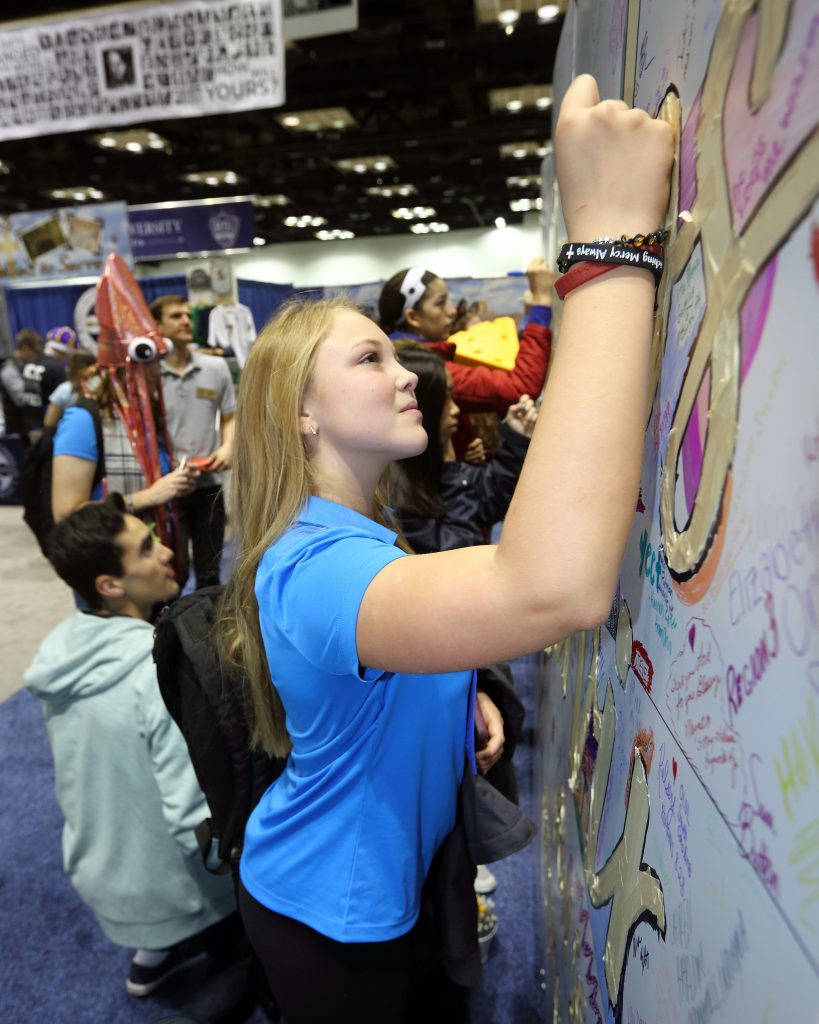 Victoria Hermann of Tucson, Ariz., adds her name and comment Nov. 17 to a wall in the Thematic Village at the National Catholic Youth Conference in Indianapolis. The biennial conference draws some 20,000 Catholic teenagers from across the country. (CNS photo/Bob Nichols, Catholic Moment)

Presenters offered practical tips during the new sessions about how young people — and anyone— can live their faith more intentionally through prayer and Scripture and by asking “How can I help?”

Franciscan Father Agustino Torres mentioned the “out of sight, out of mind” tendency after NCYC.

“Then two weeks later things get back to normal,” he continued. “Sometimes you go home changed, but things at home haven’t changed. … You go back home to the same mess.

“My solution is prayer, love — and TACOS,” he said, laughter filling the room as a slide appeared spelling out the acronym: “Telling Another Christ Overcomes Sadness.”

Prayer is a must to keeping personal faith alive, Father Torres said.

“We must pray, because if we’re going to dive deeper, we can’t give what we don’t have,” he said.

Mass is the highest form of prayer and worship, but only for those who fully participate he told his young audience.

“If you go to Mass without putting anything into it, how can you expect to get anything out of it? I don’t care if what the priest says in the homily is boring, Jesus is coming down in the Eucharist. He is being made present. Every single Mass is a miracle,” he said.

His next tip focused on love, which he defined as when “we don’t think first of ourselves but begin to think more of the person right in front of us.”

“How many of you, the first thing you do when you wake up is check your (phone)?” Father Torres asked. “Don’t think first of who contacted me; think first of contacting God. Just make the sign of the cross and say, ‘Lord, help me to love like you today.’ Then you can check your phone.”

“The best way for you to live what you receive” at NCYC, he suggested, “is for you to go up to other people, especially if they’re down, and share a word of encouragement: ‘Can I pray with you? Here’s a Bible verse that’s helped me.’

“You never know how you sharing this message that Christ overcomes sadness can change a life.” 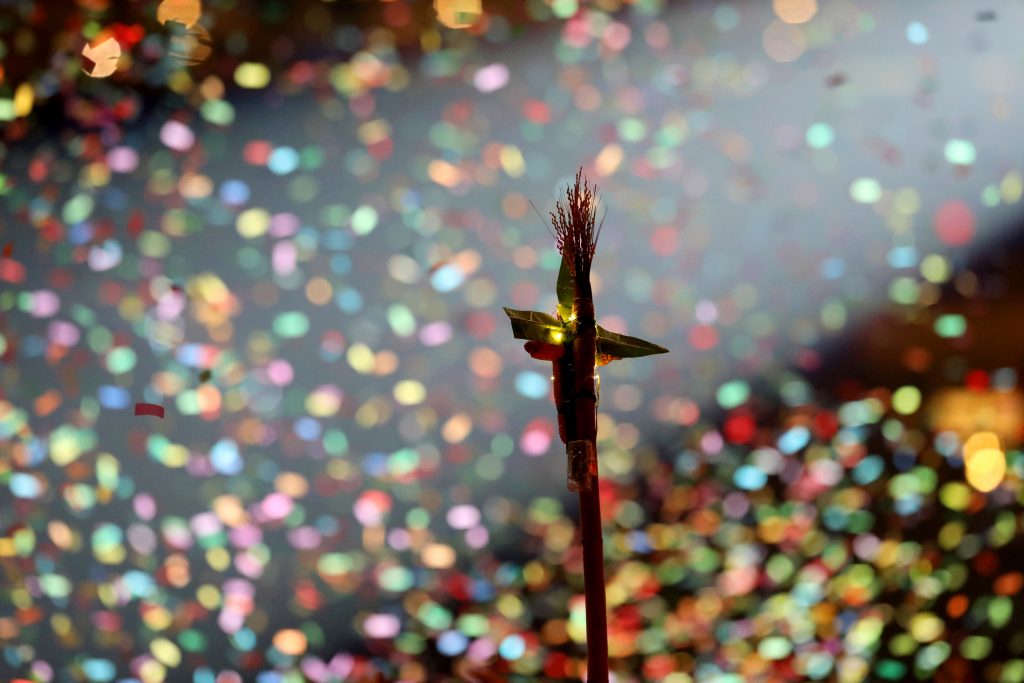 Confetti falls following the King and Country concert Nov. 21, 2019, at the National Catholic Youth Conference in Indianapolis. About 20,000 youth gathered for the conference, which is organized by the National Federation for Catholic Youth Ministry with the help of the Indianapolis Archdiocese as the host. (CNS photo/Karen Bonar, The Register)

“If you actually want to live — not just to be, but to live — as a Catholic, you are going to have to get to know this book,” he said, holding up the Bible. “This is nonnegotiable.”

His first suggestion was to read upcoming Sunday readings in advance.

“The Catholic Church actually believes, this is so ridiculous, that in the 167 hours that you’re not in Sunday Mass, that you would set aside some time to read the readings for Mass,” Hart said in mock indignation.

Acknowledging people’s busy lives, he suggested reading each of the Sunday readings, including the Psalm response, on separate days of the week rather than all in one sitting.

Hart’s second practical tip for reading Scripture is not to read the Bible in order from cover to cover.

“Start with the Gospel of Mark,” he suggested. “It’s the shortest, easiest, most action-packed Gospel. And it has stories you’re accustomed to hearing.”He recommended reading a few verses at a time rather than the entire book or even a chapter, and to use the “lectio divina” (“holy reading”) approach to reading Scripture: Read the passage, reflect on a word or phrase that got your attention, respond to God in prayer about the word or phrase, and rest in God, listening for a response.

If Mark’s Gospel, at 16 chapters, is too intimidating, Hart said, “go to the book of James.” With only five chapters it’s one of the shortest books in the Bible, “and it’s basically how to put up with really annoying people,” he added.

Hart recommended downloading free apps that use either the Revised Standard Version or New American Bible, both of which are approved Catholic versions of the Bible.

In the final Deep Dive session, Prejean McGrady identified the young people present as belonging to “Generation Z,” those born in 1996 and later.

“There are three things about Gen Z … that I think make you uniquely suited to help the Church,” she said.

The first trait is that “you believe you can change the world,” she explained, citing a poll of 3,000 young people in which 64% responded that they believe they could make a difference in the world.

Second, she said, is that Generation Z “longs for presence. … You crave quality time.” So when it comes to helping others, she said, “you are uniquely suited to give that quality time to people, to look up from the phone, to stare into the face of another.”

Finally, she continued, “You like to tell your story,” a trait essential to evangelization. “When you’ve met Jesus Christ, you can’t help but give testimony to how he’s changed your life — and if your life wasn’t changed, then it wasn’t Jesus that you met.”

Prejean McGrady said such traits enable young Catholics to imitate Christ by saying, “How can I help?” She offered four practical ways on how to do that.

First is to study the faith.

“Buy books. Read the catechism. Put Scripture in your life,” she suggested. “You need to know what we believe and why we believe it … especially in the relativistic culture we live in where everybody has a question and wants to disprove you.”

The second step is to pray. Prejean McGrady likened the essential act of praying to “charging your phone. … You have to take personal quality time with the one who is just enraptured by you and just wants to see your face.”

She also encouraged the young people to “get out of your comfort zone.

“It takes a little while to get there, but there does come a time when talking with people about Jesus does become comfortable. You have to ask God to take those uncomfortable moments and make them comfortable for you,” she said.

And evangelizing doesn’t have to mean talking, she added.

“Wear a cross. Put a Catholic sticker on your water bottle or a Catholic background on the back of your phone,” she said. “Maybe grab a few friends and pray the rosary in the lunch room. Is it countercultural? … Yeah. But get over yourself. Jesus died on a cross. You can say a rosary in front of other people.”

Prejean McGrady’s last tip was to “be generous.”

“Generosity is the way we’re called to see the people in front of us, to ask in every moment, ‘How can I love them like Jesus loves them?’ and ‘How does that bring me closer to Jesus?’”