Young men seeking information about seminary life were given the opportunity to spend an evening with several diocesan priests and seminarians on Tuesday, Jan. 3, in Fort Wayne, and on Friday, Jan. 6, in Mishawaka. They shared a meal and discussed potential vocations to the priesthood. The Diocese of Fort Wayne-South bend hosted the two “Andrew Dinners” at St. Charles Borromeo Parish in Fort Wayne and at St. Monica Parish in Mishawaka.

At the Fort Wayne dinner, seminarian Andrew Barnes told the young men about the daily life of a seminarian at Mount Saint Mary’s in Emmitsburg, Maryland.

Barnes said that seminarians wake up and pray their morning prayer at around 6:45 a.m. before celebrating Mass at 7 a.m. He noted that, after Mass, the day plays out like a typical college day for a student with classes and occasional breaks to pursue personal enrichment. 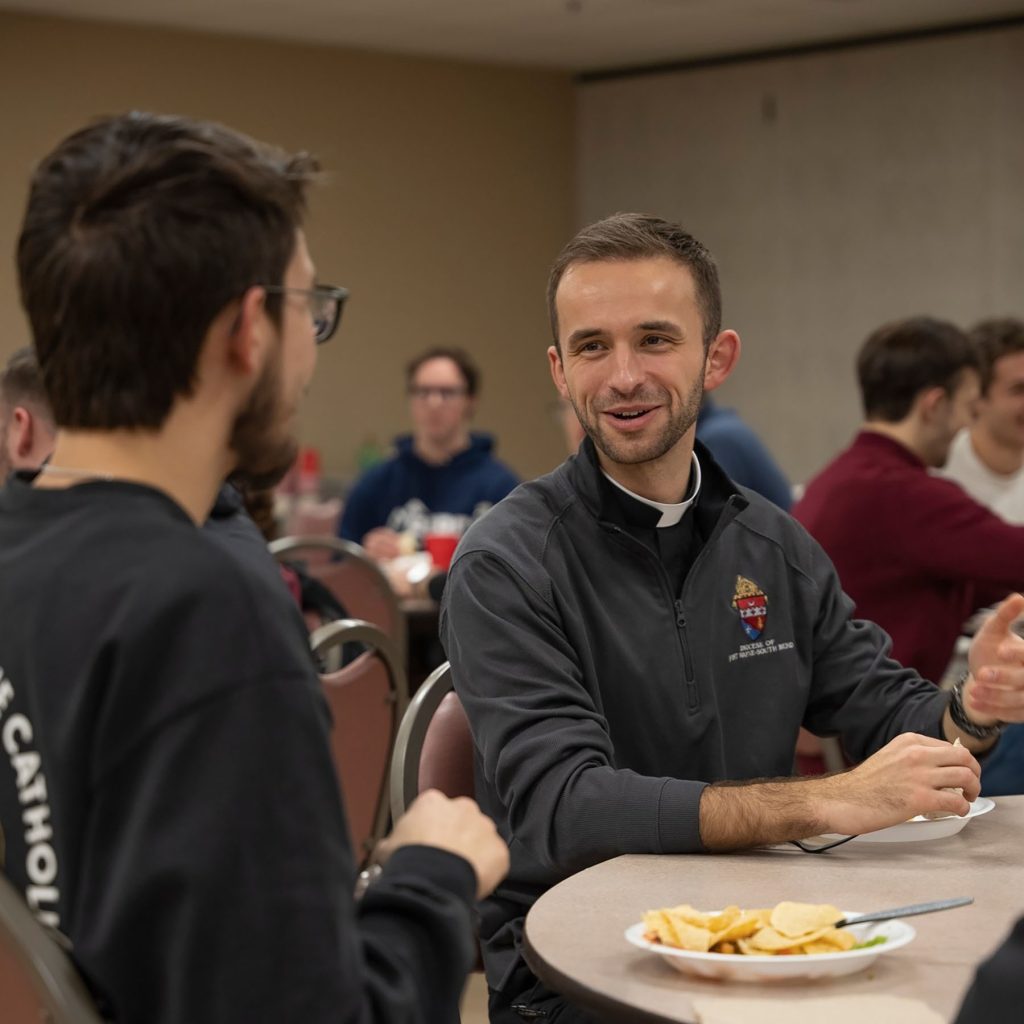 Photos by Joshua Schipper
Young men eat dinner with diocesan priests and seminarians as they learn more about seminary and the priesthood at an “Andrew Dinner” sponsored by the Vocations Office on Tuesday, Jan. 3, at St. Charles Borromeo Church in Fort Wayne.

“We have two seminarians who lift (weights) every single day, so that’s very much part of their schedule.”

At the end of the school day, Barnes said, everyone meets for evening prayer before transitioning to dinner. “Then, the rest of the night is just yours. So, it’s structured but it’s pretty free to make your schedule your own.”

Barnes said that on the weekends, some seminarians participate in a “pastoral field experience” in which they are assigned to a parish or participate in other pastoral activities like visiting nursing homes and hospitals, or even teaching classes.

“It’s a really healthy environment to be with a bunch of guys who are all pursuing the same path. I like to describe it as a fraternity that is morally upstanding.” 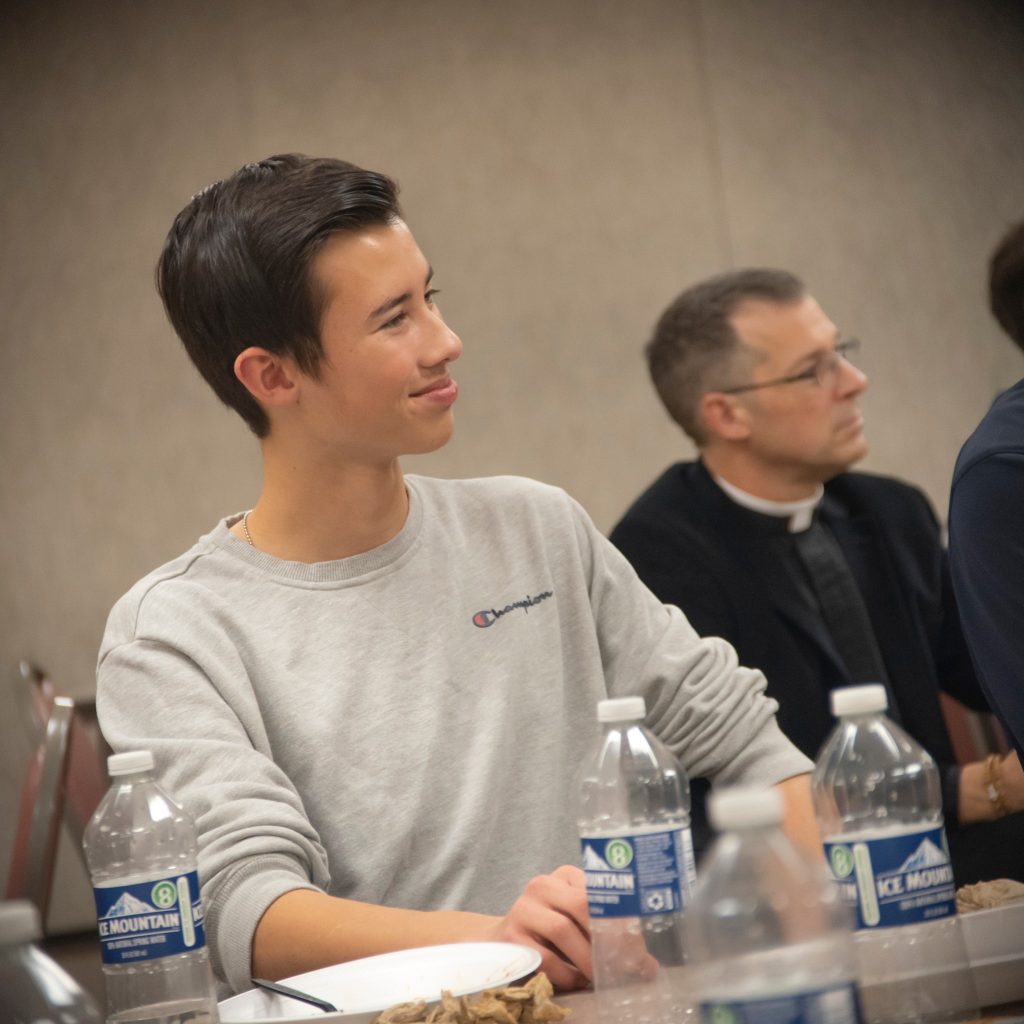 Young men listen and ask questions as several steps to good discernment are outlined, including making a pros and cons list and examining where your heart feels more consolation.

Father Andrew Budzinski, Vocations Director for the diocese, fielded several questions from the young men gathered at the dinner. One participant asked about the diocesan bishop’s role in acceptance to seminary and the priesthood. Father Budzinski explained that the bishop sponsors a seminarian and that they attend the seminary on the recommendation of the bishop.

He further explained that a bishop can revoke, delay, or deny this sponsorship in the same way that a seminarian can discern out of seminary. This, he explained, should make a prospective seminarian more confident about joining seminary because the bishop, school leaders, and advisors are keeping a close eye on their vocational journey and can counsel them on whether they think that the priesthood is the right fit.

Another young man asked about how he can know for sure that a particular vocation is the correct choice for him. For this, Father Budzinski highlighted some ideas from a book on discernment.

The first step, he said, was to check if any path is absolutely clear — something Father Budzinski said is rare but does happen. Next, an individual should examine their heart — what makes them feel more fulfilled and what paths have brought spiritual desolation. Finally, he said to examine the options from a logical standpoint. A pros and cons list might clearly show more pros for one option than another. The option with a more positive lean is something worth exploring further. 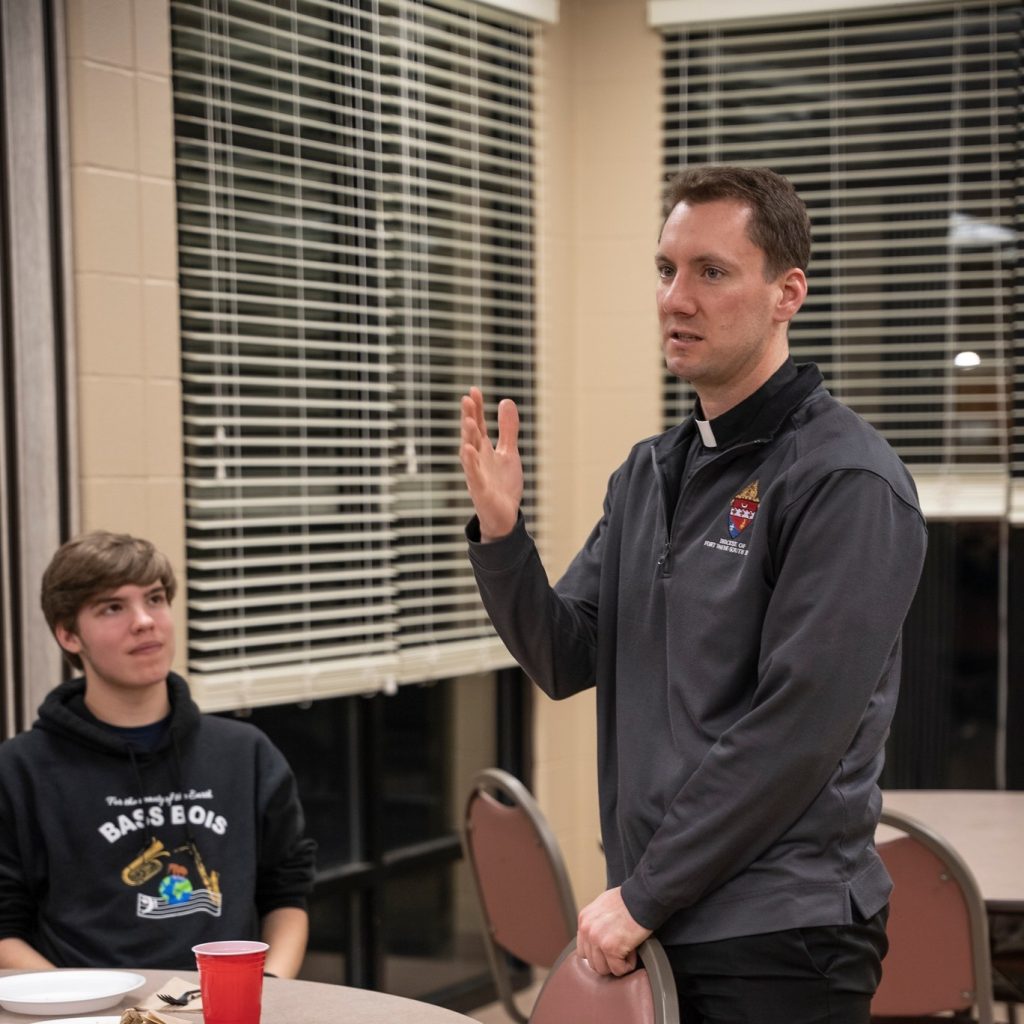 Father Terry Coonan speaks to the vocation of priesthood at a recent Andrew Dinner.

After completion of seminary comes ordination to the priesthood. Father Terrance Coonan spoke about the daily responsibilities of a priest. He mentioned that priests consistently rank high in terms of career satisfaction. The priests gathered also mentioned that diocesan priesthood is a brotherhood, with a handful of them saying that they had met up to play cards earlier that week.

Father Coonan said that sometimes it can be hard, however, because the work of a priest is less visible than other careers and vocations, but that  “seeing the world, seeing reality through the perspective of our faith” aids in easing these concerns.

“I love that I can — every single day — know that my work has eternal consequences. I’m doing something that matters forever.”

Those interested in more information about seminary and diocesan priesthood can visit discernpriesthood.com.