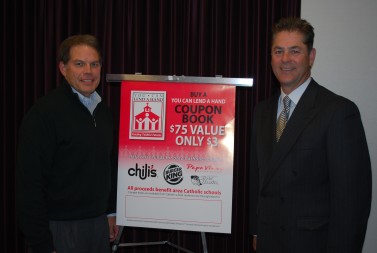 By Karen Clifford Tom Hanson, director of marketing, left, chats with Dan Fitzpatrick, chairman and CEO of Quality Dining about the upcoming You Can Lend a Hand fundraising program.

MISHAWAKA — For Dan Fitzpatrick, chairman and CEO of Quality Dining, Inc, contributing to the overall success of any business entails working to make communities a better place to live. “I’ve always been of a mind that we should not only be a good operator of our business, but that we should be a good and contributing corporate citizen.”

To that end, Fitzpatrick helped to initiate the You Can Lend a Hand fundraising campaign that to date has raised $7.8 million dollars for Catholic schools throughout northern Indiana, western Michigan and southeastern Michigan.

The fundraising program has its origins in 1982 when Fitzpatrick bought four Burger King restaurants, three of which were located in the twin cities of Benton Harbor and St. Joseph, Mich. With Catholic education an important part of his family life, Fitzpatrick introduced himself to the superintendent of the Catholic schools in the twin cities area and discovered there were financial needs within the school system.

“We constructed this fundraiser as a kind of a template from what we had put together at a high school in Toledo. And we polished up that idea and made it a little bit better, bigger and easier,” said Fitzpatrick.

The fundraising campaign began in the twin cities Catholic school system in 1982 and was very successful. A few years later Fitzpatrick offered the idea to Catholic school principals in the South Bend-Mishawaka area with the encouragement of Bishop John M. D’Arcy. The program was successful in both areas and was subsequently marketed in Fort Wayne and Grand Rapids, Muskegon and suburban areas of Detroit, Mich.

The key to the fundraiser’s success is its simplicity, Fitzpatrick, notes. Catholic school students sell coupon books annually in early February that contain an assortment of coupons from restaurants such as Burger King, Chili’s and Papa Vino’s, as well as local sports venues such as the South Bend Silver Hawks, and Fort Wayne Freedom and Mad Ants. The books are sold by students for $3, but have a retail value of over $75.

Each participating Catholic school keeps $2.50 of each coupon book sale, with 50 cents going into a fund to pay the costs of printing, merchandising and marketing of the program such as production costs and billboards. The schools can use their money in any manner that best addresses the opportunities and challenges they have in the schools.

“You can use just one coupon out of the book and pay for the whole book; that’s the kind of value that we try to exchange. We believe there will be 49 schools participating in 2010, and they will sell roughly 115,000 books. They will net in the $300,000 and change range. And it all goes to the schools to do the things that they think are important for them,” Fitzpatrick emphasized. At St. Monica School in Mishawaka, Principal Sister Pat Gavin explained that proceeds from the fundraiser have gone into the Home and School Association (HASA) fund and helped purchase a mobile computer lab, new carpeting for the classrooms and stage curtains at the school. “The You Can Lend a Hand campaign has been really good for our school. We have been asking each student to sell 15 books and the parents have been very supportive.”

“When you sit in a body like that it is very self awakening. We bring all the school kids together, both here, and in Fort Wayne (for their own all-school Mass). Notre Dame gives us ushers and they bring us into the Joyce Center, and the pastors and the schools participate in the liturgy.”

Fitzpatrick gives credit to the Catholic community for the schools’ successes. “I am so proud of our Catholic schools. They are one of the real assets of our community. Our Catholic schools are funded from the generosity of the parish, the generosity of the parents, through tuition, as well as other fundraising efforts and this program. This is unlike the public schools where we get direct aid in the form of taxation. We are doing it on our own.”
The You Can Lend a Hand campaign runs from Feb. 1 to March 5.