A delegation of high schoolers from the Diocese of Fort Wayne-South Bend joined an estimated 11,000 attendees at the National Catholic Youth Conference in Indianapolis from Thursday, Nov. 18, to Saturday, Nov. 20.

The teens had opportunities to listen to keynotes from Catholic speakers in the Indiana Convention Center, celebrate Mass at Lucas Oil Stadium and participate in praise and worship.

Several of the teens participated in a trend throughout the three-day conference. They would stealthily approach their unsuspecting peers and fasten a wooden clothespin to their clothing, hoping their the target wouldn’t notice. Oftentimes, these clothespins included Bible verses, social media tags and inspirational quotes.

Even the chaperones got in on the action, attaching as many clothespins as they could to their unwitting small group of students. By the end of the conference, many teens’ hats, shirts and bookbags were covered in the wooden clips. 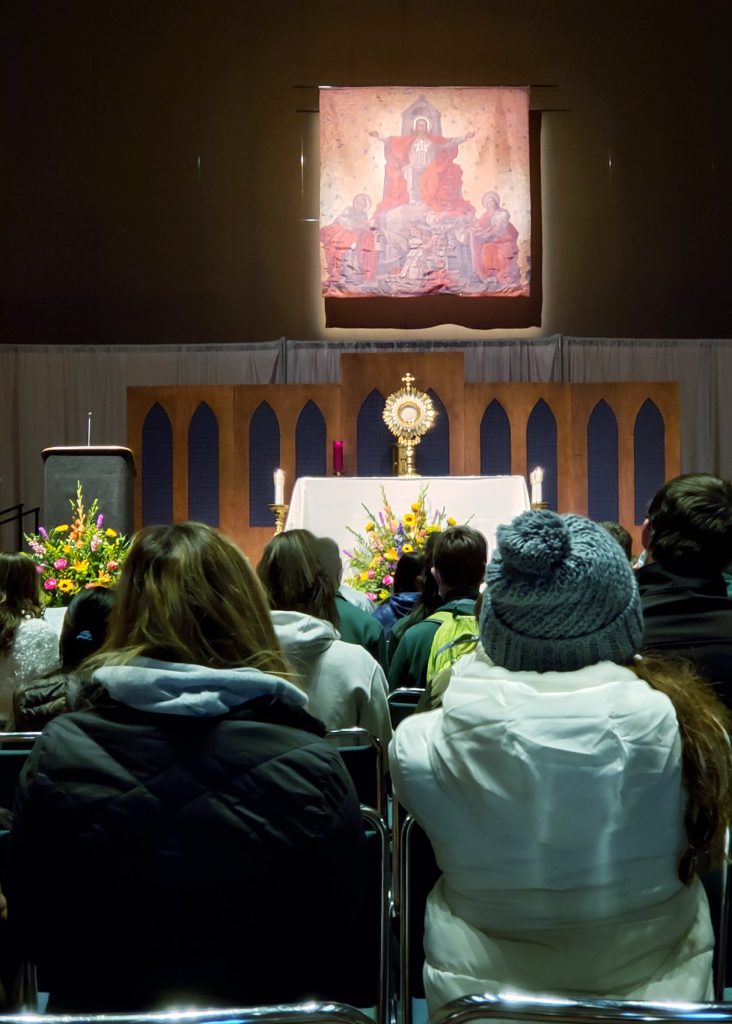 During downtime and while walking to the various breakout sessions, it seemed as though the young people were keeping an eye out for opportunities to trade small items like stickers and hats with students from other groups, cities and states — another tradition at young adult pilgrimages like NCYC and World Youth Day.

The NCYC “village” gave them the opportunity to buy a number of Catholic-themed trinkets, including socks with saints on them. The village also connected the visiting high schoolers with different Catholic ministries and colleges, including Marian University and Holy Cross College.

For Josephine Cavacini, a senior at Bishop Dwenger High School in Fort Wayne, the 2021 conference was her first and last experience with NCYC.

“I’m sad that I can’t go again because this is my last year, as a senior, and so I won’t get to experience another one.” 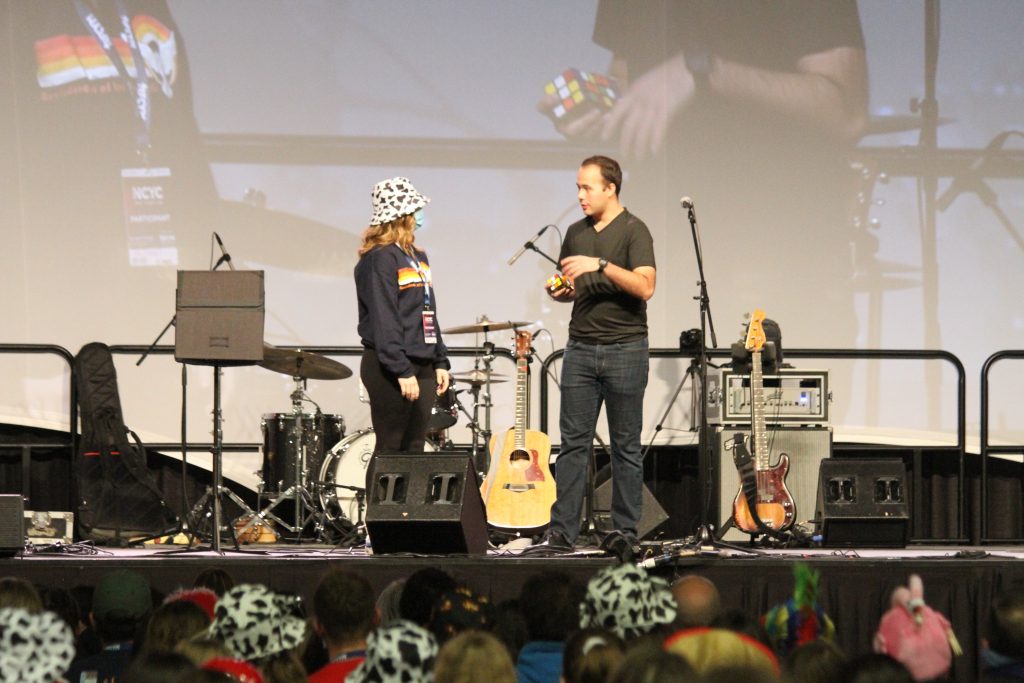 Joshua Schipper
The speakers during a Saturday breakout session titled “Heaven, Hell, and Hot Topics,” performed optical illusions to illustrate the differences between perception and reality.

For anyone who has not attended an NCYC conference, she strongly recommends it.

“This weekend has definitely strengthened my faith. The talks really connected with me and the Holy Spirit was definitely sending down His spirits and pouring out His graces upon us, and the Lord was giving us such fruitful experiences.”

Cavacini also mentioned that she enjoyed one of the breakout sessions titled “Heaven, Hell, and Hot Topics” in which one speaker performed optical illusions and discussed the potential differences between perception and reality. The session’s live band performed a mix of secular music and praise and worship.

Hunter Wallace, another teen who attended NCYC, said that this was his second time participating in the conference.

“I really liked it the first time because it was just a really cool thing to be a part of. I wanted to come back again.”

Wallace added that adoration stood out to him during the 2021 conference, because the whole stadium was “super quiet” and the priest told stories.

NCYC is an event hosted by the National Federation for Catholic Youth Ministry and has taken place biennially in Indianapolis since 2011. The NFCYM announced, however, that the next NCYC conference, “Walking on Water,” will take place on the west coast in Long Beach, California, in November 2022. Students may recognize one of the 2022 emcees, Father Agustino Torres, who emceed the diocesan World Youth Day conference at Headwaters Park, Fort Wayne, in late August.

In the hour following dinner at The Old Spaghetti Factory, the teens prepared themselves to celebrate Mass, which was concelebrated by Bishop Kevin C. Rhoades. During the homily, Archbishop of Indianapolis Charles C. Thompson offered advice to the teens by recalling the theme of NCYC 2021. 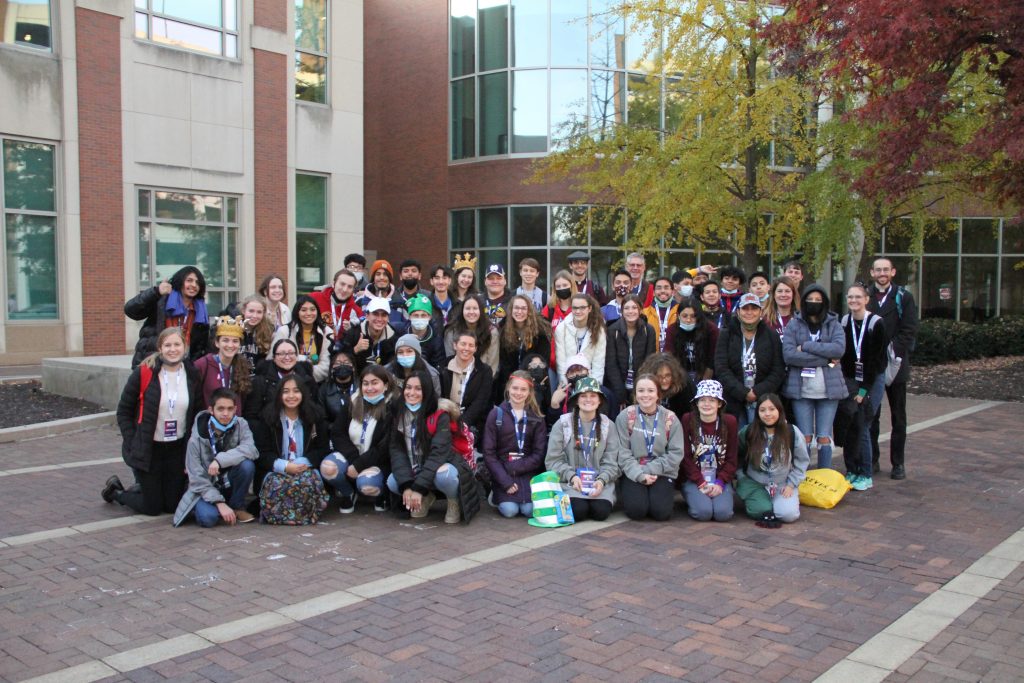 Archbishop Thompson asked the crowd to respond during the homily with either the Spanish or English translation of the conference motto, “Ablaze.” In every instance that the archbishop said “Ablaze,” teens from the diocese of Fort Wayne-South Bend responded with the Spanish translation, “Enciende el Fuego.”

In his homily at Lucas Oil Stadium on Saturday evening, Archbishop Thompson spoke on having a relationship with Jesus.

“Just as we do with family and closest friends, we must spend quality time with him — not just at NCYC, but everyday.

“To carry out the mission of Christ,” he added, “the Church needs each and every one of us. To be clear, you are not the future Church, but the young Church here and now.”