Pope Francis declared a Year of St. Joseph to be celebrated from Dec. 8, 2020, to Dec. 8, 2021. The date was chosen, Bishop Rhoades explained, because that was the date Blessed Pius IX named St. Joseph patron of the universal Church in 1870. Blessed Pius IX also declared the dogma of Mary as the Immaculate Conception.

Declaring a year to celebrate the faithful spouse of the Blessed Mother came about in part because of the tireless efforts of Father Donald Calloway, MIC. Father Calloway’s deep devotion to St. Joseph inspired him to write a book that swept the Catholic world in the last year: “Consecration to St. Joseph: The Wonders of Our Spiritual Father.” In interviews, Father Calloway expressed his surprise that St. Joseph had not been honored with a jubilee year, and Father Calloway wrote a personal letter to the pope requesting one.

Devotion to St. Joseph grew rapidly through the year dedicated to him. Kara Slocum, manager of Good Shepherd Books and Gifts, stated that early this year, Father Calloway’s book and all things St. Joseph practically flew off the store shelves. Families, individuals and parishes completed the consecration. St. Joseph Parishes in Mishawaka and South Bend also coordinated a pilgrimage between the two churches May 1, the feast of St. Joseph the Worker.

At the beginning of the Year of St. Joseph, Father Chris Lapp, pastor of St. Joseph in Mishawaka, invited Bishop Rhoades to visit his parish before the end of his year. The bishop was able to do so on the last day. In his homily, he pointed toward the appropriateness of the date, as the Immaculate Virgin Mary is also the patroness of the Diocese of Fort Wayne-South Bend and the person that St. Joseph “loved with all his heart and whom he protected, along with their Son Jesus.” 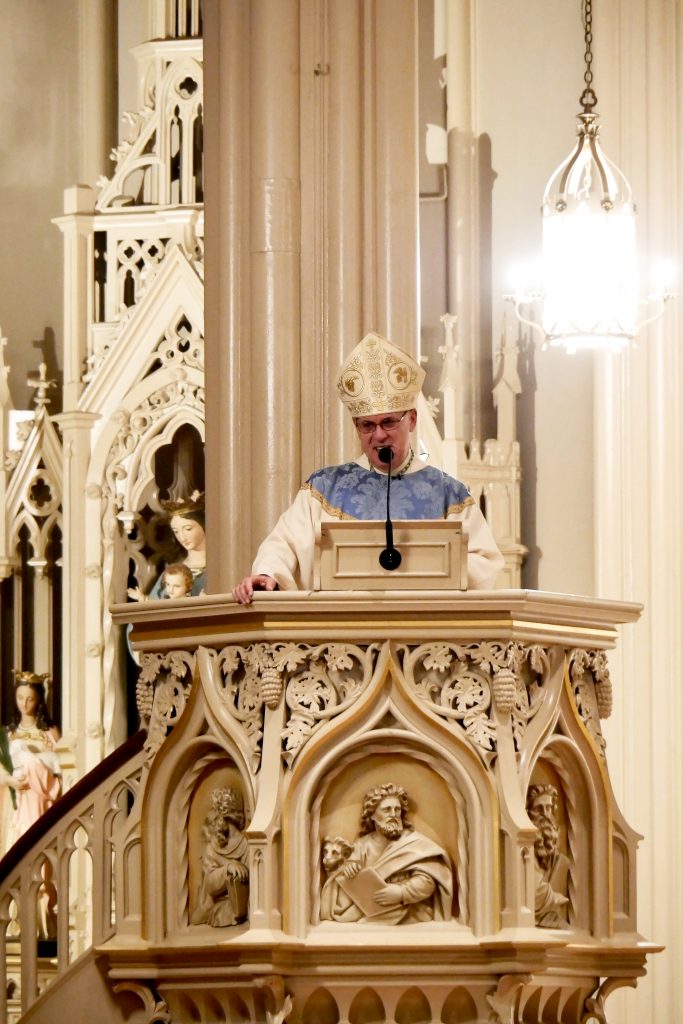 Jennifer Barton
Bishop Kevin C. Rhoades gives a homily on the Solemnity of the Immaculate Conception of the Blessed Virgin Mary at St. Joseph Parish in Mishawaka to close the Year of St. Joseph Dec. 8.

The bishop spoke about the first reading from the book of Genesis.

“God, in His mercy, put enmity between Satan and his offspring and the woman and her offspring. In the Hebrew original, ‘enmity’ means complete and radical opposition. How did God put enmity, complete and radical opposition, between the devil and the woman? He preserved a woman from any stain of sin. That woman was Mary. In His mercy, God did not allow her to inherit the condition of original sin.

“God poured out His grace upon Mary from the first moment of her existence. This is the Immaculate Conception,” he continued. “The Father, rich in mercy, sent His Son to save us, to be our Redeemer. And He saved Mary, a daughter of Israel, in a unique way, applying the grace of redemption to her at the moment of her conception.

“The Blessed Virgin Mary is the masterpiece of God’s mercy in the world. No other creature manifests God’s mercy as does this lowly virgin of Nazareth,” he said. “And no one has responded with greater faith in God and His mercy than Mary.”

The bishop urged all present to imitate her virtues and grow in devotion to her. He noted, “St. Thomas Aquinas wrote that ‘the Blessed Virgin was so full of grace that it overflows onto all mankind.’ It certainly overflowed onto St. Joseph.” 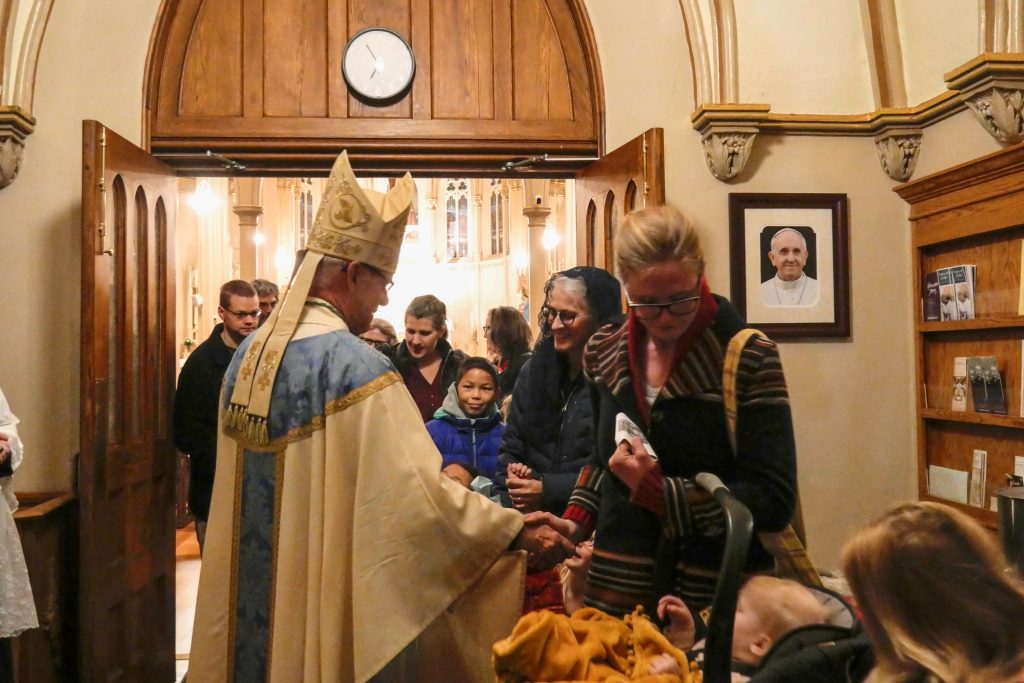 For this special holy day, a combined adult choir and Gregorian Chant Schola consisting of around 25 members sang together. They performed both Latin chant and traditional songs under the direction of Jerome Cole, director of sacred music for St. Joseph.

The church was filled with worshippers for the solemnity, and a dinner was held afterward in the Mishawaka Catholic School building. At the dinner, Cole played selections honoring St. Joseph based on readings from Father Calloway’s book and written by the director of music at St. Bavo, Joseph Higgenbotham.

Father Lapp commented that having the bishop visit was “a beautiful way to conclude the Year of St. Joseph.” His parish completed the consecration to St. Joseph in October to coincide with the anniversary of the church’s dedication.