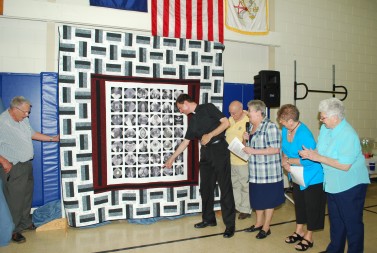 Mishawaka Queen of Peace pastor Father Daniel Scheidt points to a picture of his mother smoking a cigarette on a photo-signature quilt given to him by the parish following an ethnic potluck on Pentecost.

Signature quilt given by parishioners to Queen of Peace pastor

MISHAWAKA — At the end of a busy day, it’s always nice to wrap up in good memories. And in the case of Father Daniel Scheidt, pastor of Queen of Peace Parish, he can now do just that.

On the evening of May 19, following Vespers and a parish ethnic potluck, three parishioners of Queen of Peace — Louise Snyder, Mary Merckx and Mary Moser — surprised Father Scheidt with a queen-size quilt that showcases a rail fence pattern with 42 pictures of Father Scheidt’s life and 96 eight-inch signature blocks.

The idea for the quilt originated with Carol Cone, director of religious education at Queen of Peace Parish. After speaking with Synder, Merckx and Moser, the three began the process of putting together the quilt in July of 2012.

Synder and Merckx were responsible for cutting the material and piecework for the fence rail signature blocks, with Moser ironing pieces of freezer paper between the fabrics of each block. Merckx noted that the pattern was selected because it worked well for signatures, with Moser adding, “The fence rail reminds me of Father Dan being our shepherd and gathering us (his sheep) to be with him.”

The fence rail blocks traveled to many locations for signatures, which included Queen of Peace, St. Pius X, St. Francis Convent in Mishawaka, and to Father Scheidt’s family members. Most of the signatures were collected during Father Scheidt’s Temporomandibular Joint (TMJ) surgery and recovery in Florida.

Queen of Peace parishioner Mike Portolese did all of the cropping and copying of photos on the fabric squares with Virginia Heitman doing the machine quilting of the project. The queen-size quilt can be hung as a wall decoration, but Synder hopes that Father Scheidt will at least once use it as a bedcover.

The timing of giving the quilt to Father Scheidt at Pentecost included having family members present, and Pentecost being the “birthday of the Church,” said Moser.

To insure that the quilt would be a surprise, the parish decided to have their second annual ethnic potluck on the same evening. Cone, who organized the event, described the scriptural background for holding the potluck.

“We know that at the original Pentecost event, the Apostles had been huddled in a room, praying, trying to figure out how they would find the courage and the wherewithal to do what Jesus had asked of them as He ascended to heaven: ‘Go and teach all nations, baptizing them.’” And we know that the Holy Spirit came upon them, enflaming their hearts, giving them courage to go out to the world and tell the Good News,” Cone explained.

She continued, “And the Good News spread throughout the world, encompassing all nations, down till this day. As the faith spread, it was celebrated by different people in different ways.”

Cone described Queen of Peace as an ethnically diverse parish including people of Hungarian, Polish, Irish, English, German, Brazilian, Italian, Swedish, Mexican, Tongan, Chinese, Lebanese and Belgium decent. “To each of those places, the faith has spread and has been celebrated. So what better time to celebrate the richness of our cultural diversity than with a supper!” she exclaimed.

Parishioner Linda Zeese brought “sfeeha,” a Lebanese meat pie to the potluck, which was a recipe passed down from her mother who was born in Beirut.

During the presentation of the quilt following the potluck, it was announced that Father Scheidt’s mother Judy was responsible for the photo selection. Father Scheidt jokingly responded that some of the pictures might be “Photoshopped “(referring to pictures of him with Santa Claus and the Easter Bunny as a child), and he laughed when viewing a picture of his mother smoking, a topic he often refers to in his homilies.

Merckx spoke on behalf of the parish after the quilt was unveiled. She began with reading Hebrews 12:1-2, Father Scheidt’s favorite scriptural passage, which was put on a label on the back of the quilt. “Therefore since we are surrounded by so great a cloud of witnesses, let us rid ourselves of every burden and sin that clings to us and persevere in running the race that lies before us while keeping our eyes fixed on Jesus, the leader and perfecter of faith. For the sake of the joy that lay before Him He endured the cross, despising its shame, and has taken His seat at the right of the throne.”

In a letter from the parishioners Merckx described how this passage applies to the parish and Father Scheidt. In her concluding remarks she noted, “May this quilt be a reminder of the love that surrounds you by this great cloud of witnesses in our beloved parish family.”

Father Scheidt’s response to the surprise quilt was marked with gratitude and love for this special gift. “I am slack jawed at how beautiful it is. In this quilt I see my life in pictures, and in the people who made it and the people in the church I see my life.”