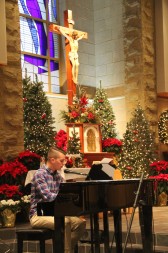 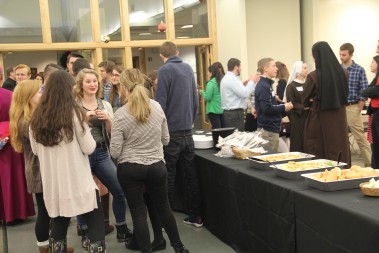 Following a reunion Mass celebrated at St. Mary Mother of God Church in Fort Wayne, World Youth Day 2016 pilgrims and their families gathered in the parish hall for a meal and took the opportunity to catch up on their extraordinary experience.

The teens and young adults, including a number of religious, seminarians and Bishop Kevin C. Rhoades, spent 10 days in July savoring the universality of their Catholic faith and the invigoration of celebrating it with the head of the Catholic Church on earth, Pope Francis.

Bishop Rhoades recalled the experience in his homily during the Mass, using the word “joyful” to describe the company of hundreds of thousands of young brothers and sisters from all over the world and their inspiring reflections on divine mercy and the pope’s call to live the beatitude of Jesus, “Blessed are the merciful.”

The pilgrims and some of their family members attended the reunion Mass, which was celebrated on the feast of St. Stephen, the first martyr of the church.

“Yesterday, the Church celebrated what Saint Francis of Assisi called ‘the feast of feasts,’” Bishop said. “We celebrated the Nativity of Our Lord. As Catholics, we celebrate the solemnity of Christmas not just on one day, December 25th, but for eight days, which we call ‘the Octave of Christmas.’ Today, the second day of the Octave, is the feast of Saint Stephen. It may seem like a contradiction, a bit perplexing that on the day after we celebrate the peace and joy of Christ’s birth, we reflect on the violent death of the first martyr of the Church and the beginning of the fierce persecution against the Church. But this apparent contradiction is overcome when we consider more in depth the mystery of Christmas.

The child Jesus lying in the manger came to save by dying on the cross, Bishop pointed out, adding that Byzantine icons of the Nativity, which show the baby Jesus wrapped tightly in linen strips, call to mind the wrapping of the body of Jesus after His crucifixion as He is put in the tomb. In fact, he said, these icons depict the manger as a kind of altar or tomb.

“This indicates that Christ our Redeemer was born to die, was born to give His life for us, for our redemption. The wood of the manger, as seen in other Christian art, indeed points to the wood of the cross. The mystery of divine love and mercy that we contemplate on the feast of Christmas is the mystery of divine love and mercy that we also contemplate on Good Friday. As Saint Paul says, the Son of God who emptied Himself to be born as a slave, humbling Himself to be born in the likeness of men, also humbled Himself in accepting death, even death on a cross.

“So it should not be so perplexing that the Church celebrates her first martyr on the day after Christmas,” he continued. “Jesus was born on earth so that we could be born into heaven. Saint Stephen, stoned to death for His fidelity to Christ, was born into heaven because Jesus was born on earth. Through His Incarnation, death, and resurrection Jesus opened for us the gates of heaven.” 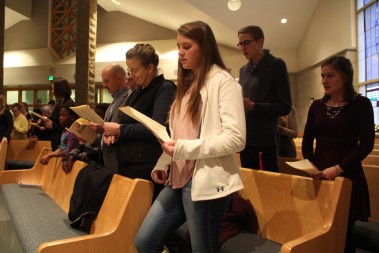 Following the Mass, those who had gathered enjoyed a meal of pizza and salad and relished the opportunity to catch up with those with whom they had experienced so much.

While in Poland the group toured the former Auschwitz concentration camp, contemplated the sacrifices of St. Maximilian Kolbe, worshipped at the Warsaw church where Blessed Jerzy Popieluszko served, learned about the life and homeland of WYD founder St. John Paul II and attended papal Masses with 300,000 others near the heart of Krakow.