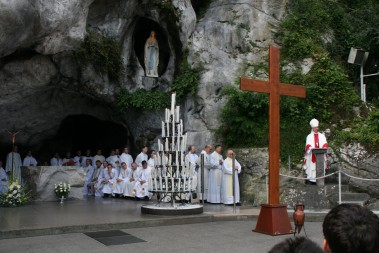 Bishop Kevin C. Rhoades celebrates Mass at the Grotto where the Blessed Mother appeared to St. Bernadette. The Lourdes visit was one of the stops on the World Youth Day 2011 pilgrimage with 120 diocesan pilgrims.

“Make us firm in the faith.” This was our prayer throughout our pilgrimage to World Youth Day in Madrid.

Our 120 diocesan pilgrims arrived in Lourdes on Thursday, August 11th, where we spent 2 1/2 days in spiritual preparation for World Youth Day. For me, the highlight of our time at the Sanctuary of Lourdes was celebrating Mass at the Grotto where our Blessed Mother appeared to Saint Bernadette. We bathed in the holy, healing waters of the miraculous spring. We participated with thousands of other pilgrims in both the Eucharistic procession and the candlelight nighttime rosary procession. It was a beautiful experience to visit Lourdes, asking the Blessed Virgin Mary to accompany us on our pilgrim journey to Madrid. We asked Mary, our great model of faith, to intercede for us, to make us “firm in the faith.”

From Lourdes, we travelled to Loyola, in the Basque region of northern Spain. There we celebrated Mass at the Shrine of Saint Ignatius Loyola (1491-1556). We visited his family home (the Tower House) and prayed in the room of his birth and in the room where, at age 30, during his recovery from serious wounds from a battle, he read a book on the life of Christ and a collection of lives of the saints. His life was changed forever. Ignatius then devoted the rest of his life to serving Christ. He founded the Society of Jesus (the Jesuit order) and led a great renewal of the Church during the Counter-Reformation. The Jesuits, under his leadership, undertook incredible missionary efforts throughout the world. We prayed at Loyola for the grace to follow the path of Saint Ignatius, one of the patron saints of World Youth Day, the path “to the greater glory of God.”

From Loyola, we travelled to Burgos. After dinner, we walked to the cathedral square where hundreds of youth were gathered in prayer, song, and dance, the night before departing for Madrid. The next day, August 15th, the Solemnity of the Assumption, we celebrated Mass in the magnificent 13th century Gothic cathedral dedicated to the Blessed Virgin Mary. This was our last Mass celebrated together with Bishop McFadden and the young pilgrims of the Diocese of Harrisburg. A group of Australian pilgrims with their bishop joined us for the liturgy of Mary’s Assumption.

We arrived in Madrid on the afternoon of August 15th. The capital city of Spain was already crowded with young pilgrims gathering from all over the world. Our own young pilgrims were excited to meet other Catholic youth from so many different countries. The joy and enthusiasm was evident on the streets and in the plazas throughout the city.

August 16th was a free day when many of us walked around the historic center of old Madrid, visiting churches and getting oriented to the layout of the beautiful city. I was happy to meet up with some of our youth in the church which houses the remains of the patron saints of Madrid, Saint Isidore the Farmer and his wife, Saint Maria de la Cabeza, also patron saints of World Youth Day. This holy married couple lived their Catholic faith with courage during the time of the Muslim rule of Spain (12th century), deeply devoted to prayer in the midst of their manual labor. They lived the Gospel teaching of love in an extraordinary way, sharing their goods with the poor and needy. Praying at their tombs, we asked the Lord to bless all married couples and families, called to holiness, to live the faith with charity in the ordinary circumstances of everyday life, like Saint Isidore and Maria.

World Youth Day officially began on the evening of August 16th with a Mass celebrated by the Cardinal Archbishop of Madrid in the historic Plaza de Cibeles. The immense crowd of young people extended well beyond the plaza into the streets leading into the plaza. The opening liturgy was the Mass of Blessed John Paul II, who initiated World Youth Day 26 years ago. A relic of his blood was brought from Krakow and venerated at the end of the Mass. We asked the Lord to “enkindle in us the fire of love that burned in the heart of Blessed John Paul II and impelled him to give himself without limits to serve the Church.”

Three daily sessions of catechesis began the next day, August 17th. Our diocesan youth had the privilege of listening to Cardinal Francis George, the Archbishop of Chicago. The evening before, prior to the opening Mass, I was fortunate to spend a couple hours with Cardinal George as we waited for the Mass to begin.

On Wednesday afternoon, I spent a few hours at the famous El Prado art museum. A friend of mine from Madrid, whom I had not seen since 1989, accompanied me through the museum. We followed a special World Youth Day itinerary based on the image of Christ, including Caravaggio’s painting of the Descent from the Cross, brought to the Prado from the Vatican museum. The religious art in the Prado Museum is some of the best and most famous in the world, with paintings by Fra Angelico, Murillo, Velasquez, Goya, El Greco, Ribera, Rubens, and many other famous artists.

On Wednesday evening, I was happy to join our diocesan youth at the Saint Francis Borgia parish hall for a vocations night. After music and talks, I led the pilgrims in Night Prayer and Benediction of the Blessed Sacrament.

On Thursday, August 18th, Pope Benedict XVI arrived in Madrid, welcomed at the airport by the king and queen of Spain. Enthusiastic crowds welcomed the Holy Father in his motorcade across the city to the apostolic nunciature. In the early evening, the Holy Father was welcomed by youth representing the five continents as he walked with them through the Puerta de Alcala and then rode in the popemobile through the streets filled with hundreds of thousands of youth to the Plaza de Cibeles. The young crowds erupted with applause and shouts of welcome as the Pope passed by. Many chanted “Benedicto” or “Viva el Papa,” and also what became the most popular chant the next few days: “Esta es la juventud del Papa” (“this is the youth of the Pope”). In the plaza, the Holy Father led a celebration of the Word, reflecting on the importance of listening to the Word of God and putting it into practice. It was a beautiful opening celebration with the Shepherd of the universal Church.

The highlight on Friday was the Via Crucis (the Way of the Cross), presided over by the Holy Father in the evening. I joined a group of our diocesan youth in the Plaza del Colon, in a dense crowd. The Holy Father entered the plaza in the popemobile on his way to Plaza de Cibeles for the Via Crucis. Fifteen stations were set up in the Paseo de Recolectos, 15 “pasos” (floats containing life-size wooden sculptures typical of Holy Week celebrations in Spain). The “pasos” are masterpieces of Spanish religious art, some dating back many centuries. Probably a million young people participated in the Via Crucis, watching on screens in plazas and streets surrounding the area where the Pope presided. It was quite moving to see the devotion and reverence of the young pilgrims as we prayed and meditated on the Passion and Death of our Lord.

On Saturday morning, the U.S. pilgrims gathered for Mass in the Palacio de Deportes, a large arena rented by the Knights of Columbus and the Sisters for Life for English events throughout the week. They called it the “Love and Life Center.” Archbishop Dolan of New York preached an inspiring homily at the Mass celebrated by Cardinal George and concelebrated by dozens of U.S. bishops. It was wonderful to see our diocesan youth again to impart a blessing upon them as they departed on foot for the overnight Vigil with the Holy Father at the Cuatro Vientos airfield.

The Prayer Vigil with the Holy Father began at 8:30 PM, but was quickly interrupted by a downpour of rain. When the Vigil was able to continue, it was somewhat abbreviated from the original plan. We were all soaking wet! The Holy Father was able to lead us in a period of adoration of the Blessed Sacrament and celebrated Benediction. He then consecrated the huge throng of youth to the Sacred Heart of Jesus. It was quite remarkable that over a million people remained calmly in prayer, despite the downpour of rain and even some unexpected lightning. The Holy Father later mentioned the strong faith and devotion of the youth in persevering despite the heavy rain and the accompanying logistical problems.

Sunday, August 21st was the final day of the World Youth Day celebrations. After just four hours of sleep, we bishops headed back to the Cuatro Vientos airbase for the final Mass. The youth had spent the night sleeping outdoors at the site. Unfortunately, due to overcrowding, not all the WYD participants were able to enter inside the site of the Mass. It was another very hot day. The Mass was beautiful and reverent. Clearly, the Holy Father connected with the young people with his warm and gentle personality.

The last few days of the pilgrimage were the most difficult and arduous for us and many other pilgrims. I was quite inspired by the perseverance, patience, and great spirit of our young people. Through all 12 days of the pilgrimage, I witnessed their joyful faith. I am very proud of the wonderful young people of our diocese who participated with such fervor and devotion in World Youth Day. I am also deeply grateful to our wonderful youth leaders, chaperones, priests, and seminarians for their untiring dedication throughout the pilgrimage. I offer very special thanks to Cindy Black, Megan Oberhausen, and Mary Glowaski for their hard work in organizing, planning and executing the pilgrimage from our diocese. I cannot thank them enough for their great work.

We go forward in Christ,

He’s our companion and He is Lord!

We go forward in Christ,

Made stronger in our faith.