Visiting the sick is one of the seven corporal works of mercy. In ordinary times, parish priests, deacons and lay eucharistic ministers call on the sick in their homes, in hospitals and nursing homes. Priests may celebrate Mass, hear confessions and anoint the sick. Lay people often lead a recitation of the rosary, bring Communion or simply spend time listening and praying with ailing individuals and families, because times of illness are also often times of loneliness and stress.

The arrival of the COVID-19 pandemic last winter dramatically altered these traditional outreaches, in part because many of the volunteers were themselves over the age of 70. In the Diocese of Fort Wayne-South Bend, on the South Bend side, Congregation of Holy Cross seminarians stepped in to help by distributing holy Communion. 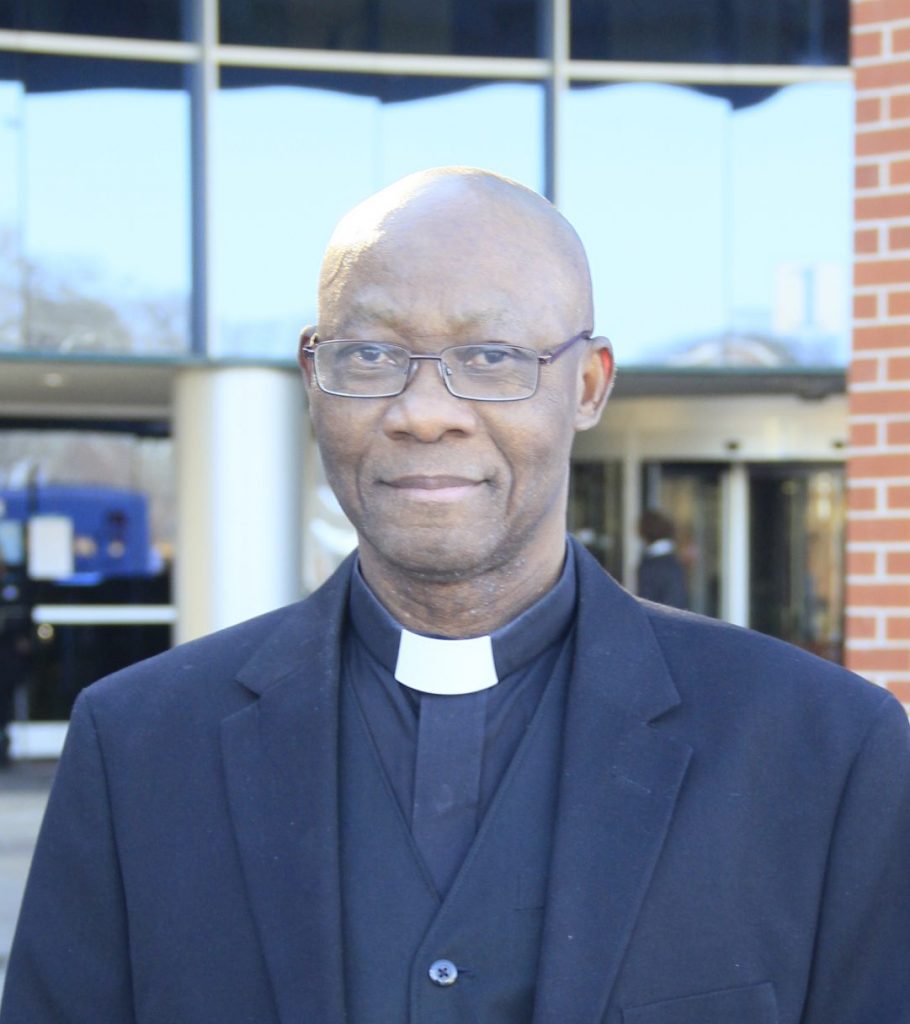 Jodi Marlin
In the midst of the ravages of the virus, chaplain Father Joachim Oforchukwu, CSSp, knows his presence is a calming and reassuring one for patients at Memorial and St. Joseph Regional Medical Center hospitals in South Bend.

The disease was scary, uncertain and frightening in its intensity and relentless in its spread, said hospital chaplain Father Joachim Oforchukwu, CSSp. Visitors were barred from nursing homes and hospitals. Pastors wanted to visit their parishioners in the hospital, but in many cases it was deemed that their exposure would endanger too many people. Even family members could only communicate with their loved ones by tapping on windows and using electronic devices, often with the assistance of the chaplains.

“We had to limit the spread of COVID-19 by eliminating in-person visiting,” confirmed Joe Czolgosz of St. Joseph Regional Medical Center Hospital in Mishawaka. “But that was a challenge and a heartache for families and staff.”

Eventually, hospitals began to make exceptions for the family of a patient who was clearly dying, providing personal protective equipment and allowing them into their loved one’s room. “Our special protocols allowed us to relax the ‘red rule’ in these special circumstances,” said Czolgosz.

Catholics who were gravely ill or facing death also needed access to the sacrament of anointing of the sick.

Sarah Sampson, coordinator of spiritual care at Memorial Hospital, South Bend, said Father Oforchukwu “always responds rapidly when I call him.” Father Oforchukwu said simply, “My presence is a continual reminder of God’s presence to the COVID-19 patients. It is a privilege to minister to them. It has not been easy, but I rely on God’s grace.” He also finds strength by praying the rosary. “I have absolute trust in Jesus Christ, who is the greatest healer and physician of all ages.”

Several months ago, Father Andrew Budzinski, pastor of St. John the Baptist Parish, Fort Wayne, was called to Lutheran Hospital to anoint a barely conscious man he had never met. At a desk set up at the hospital entrance, they said they were expecting him.

It was so early in the pandemic that he had no idea what the protocols might be. They helped him “vest,” layer upon layer, in a hairnet, booties, gown, gloves, N95 mask, goggles and face shield — an unforgettable experience. Alone in a room, the patient received the anointing of the sick at the hands of the Church’s minister.

It was all part of the vocation for Father Budzinski. “You receive the call, and you go,” he said.

Father Michael Mbonu has also been ministering, full-time, at SJRMC in Mishawaka.

“This has been a very challenging experience for all of us,” he said. “These patients are suffering greatly. When I listen to them, I can’t help sharing their pain, and yet I know I have to be strong in order to encourage them. I want them to know that even in the darkest times, God is right there.” He prays for God’s healing presence and tries to support the patients every step of the way, visiting Catholic patients in the hospital daily.

Father Stephen Felicichia began ministering to those with COVID-19 shortly after he was ordained in June. Assigned to St. Elizabeth Ann Seton, a few miles from Lutheran Hospital, he found it logical to take on the ministry in order to help reduce the risk to older clerics.

“The nurses and doctors are the real heroes,” he said. “They do a terrific job, working under tremendous stress.”

“I’m not afraid; I’m blessed to be able to take the Lord in,” Father Felicichia said.

Having served in the military, he’s used to following orders and putting on protective gear.

“It’s in the nature of the job, so you do it. You prepare as well as you can, and you trust your equipment to protect you against ambush.” He has had to self-quarantine, but never because of his hospital ministry. So far, he has always tested negative for the virus.

He admits it can be challenging to hear someone’s confession through an oxygen mask, but “people need and deserve to receive Jesus Christ, especially when they may be dying,” he said.

He regards it as a privilege to pray with people as they accomplish the final leg of their journey to heaven. “You love people and you want to give them every possible grace of the Church. There’s Jesus right there in the sick person.”

‘You forget about yourself’

Father Eric Burgener, too, uplifts the staffs of Parkview and Dupont hospitals in Fort Wayne, who keep him informed about their patients’ deepest needs.

Sometime in the fall, he stopped counting the number of patients he had anointed during his hospital ministry. At that time, it was over 100.

Taking on the full-time role of on-call chaplain at Dupont Hospital and several Parkview Hospital locations changed many of the details of Father Burgener’s life. Although he helps out at St. Vincent de Paul Parish, Fort Wayne, by hearing confessions, he hasn’t celebrated Mass in the main church there in months. He also moved out of the rectory and into a suite in the parish’s former rectory in order to isolate and protect the parish’s other priests.

At first, hospitals were reluctant to let anyone in to minister to patients, he said. But he worked through both the bureaucracy and his own hesitation. “Jesus pushed me in,” he said. “Once you see the suffering, you forget about yourself.” 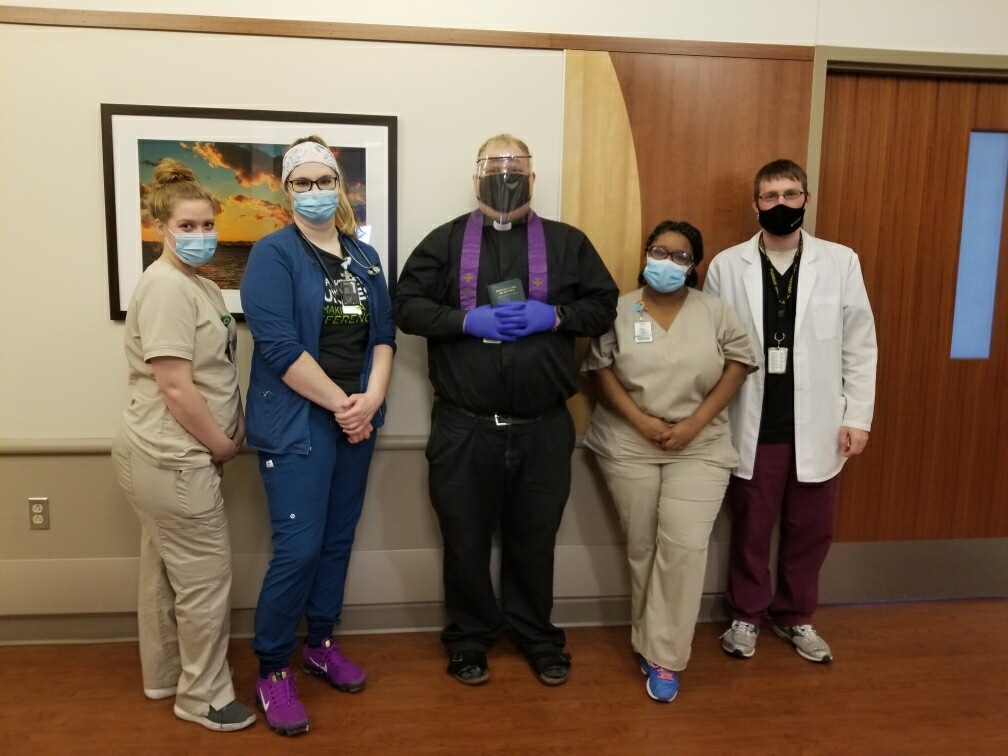 Provided by Father Eric Burgener
Father Eric Burgener is flanked by nurses at Parkview Hospital in Fort Wayne last week. For the past year Father Burgener’s ministry has been focused heavily on COVID-19 patients at Parkview and Dupont hospitals; he extols the selflessness and dedication of the hospital staff, who have remained on the front lines of the pandemic for the last 12 months, but he has been right there with them — showing compassion and administering sacraments.

In June, Father Burgener contracted COVID-19. It was easy for him to recognize the symptoms, so he proceeded to an emergency room, where he tested positive. He remained out of commission for several weeks, combating from home a fever, cough and difficulty breathing. Then he headed back into the fray.

As a frontline hospital volunteer, Father Burgener was able to schedule a vaccination in January. But on his way to get it, he received a call to anoint someone in the emergency room. He administered last rites a minute before the man died.

Pope Francis has elaborated on two safe ways for people with COVID-19 to be anointed. Father Felicichia uses a Q-tip to put the oil on the person’s hands and forehead. Father Burgener prefers to wear gloves, being careful to dip into the oil with a different finger if he is anointing more than one patient.

Both observe careful protocols to cleanse themselves and their clothing. Father Burgener uses a high-power, ultraviolet lamp in his room. They respect both the disease and the sacrament by eventually burning anything that has come into contact with the patient and the blessed oil or host.

There have been many memorable moments. Some patients have recovered after being anointed. An 82-year-old clearly consented to be received into the Catholic Church. A dying woman had two final wishes; Father Burgener was able to bring her both a rosary, which turned out to be just like the one she received at her first Communion, and an order of Kentucky Fried Chicken they shared — to the edification of her nurses, who had been too busy to fulfill the request.

Father Mbonu noted that facing a crisis like COVID-19 makes both patients and their families face their mortality. He encourages them to verbalize their feelings and is especially gratified by patients like the one who not only recovered from the virus but resolved to become more involved in his church and his faith, to proclaim the mercy of God he had experienced.

Father Burgener urges family members to call a priest in earlier rather than later when a loved one is in the hospital. “This is such a powerful, beautiful sacrament,” he testified. “You can just see strength and peace settle over the person.” He’s thrilled to also be able to offer an apostolic pardon, which not only forgives sins but eternally remits the damage due to sin.

On the “altar” of the hospital bed, “Jesus the priest and the great physician is working within the person’s heart — and I get to witness it!”