WASHINGTON (CNS) — Archbishop Allen H. Vigneron of Detroit will head up a special working group of the U.S. bishops to address issues surrounding the election of a Catholic president and policies that may come about that would be in conflict with Catholic teaching and the bishops’ priorities. 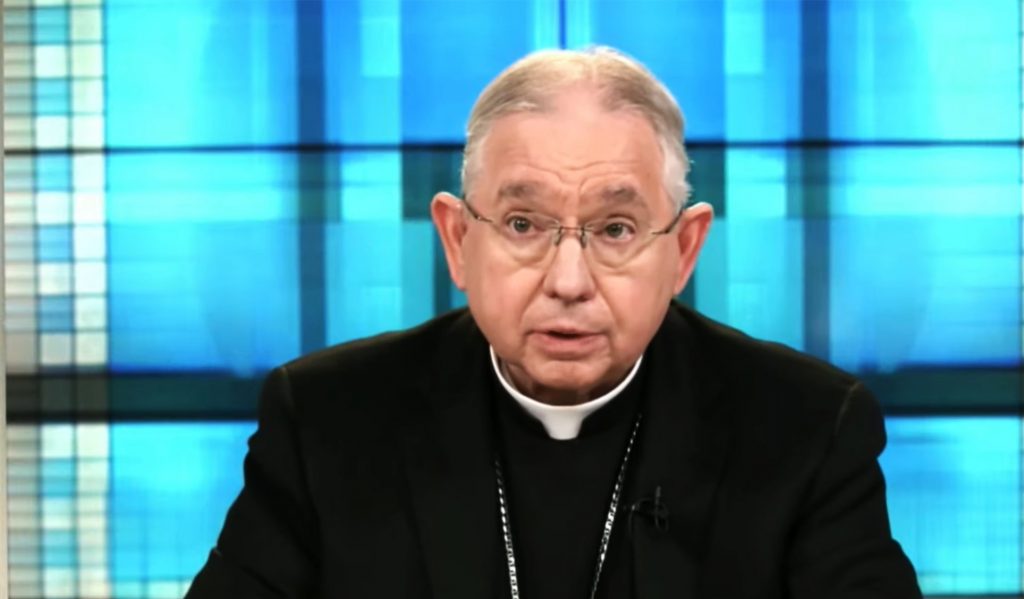 Los Angeles Archbishop José H. Gomez, president of the U.S. Conference of Catholic Bishops, announces Nov. 17, 2020, he is forming a committee to look at various policy issues with regard to the incoming administration of President-elect Joe Biden. The archbishop made the announcement at the USCCB headquarters in Washington at the end of the last day of the bishops’ Nov. 16-17 virtual fall meeting. (CNS photo/Screen Grab)

Archbishop José H. Gomez of Los Angeles, president of the U.S. Conference of Catholic bishops, announced the establishment of this working group at the end of the public portion of the bishops’ Nov. 16-17 meeting, held this year completely online. Among the members of the committee is Bishop Kevin C. Rhoades of the Diocese of Fort Wayne-South Bend, chairman of the USCCB Committee on Doctrine.

Archbishop Vigneron is vice president of the USCCB. Other members of the working group will be USCCB committee chairmen in a number of areas where disagreement is expected between the Church and President-elect Joe Biden.

“We are facing a unique moment in the history of our country” with the election of only the second Catholic as president, Archbishop Gomez said. “This presents certain opportunities but also certain challenges.”

While “the president-elect has given us reason to believe his faith commitments will lead to certain policies that we favor,” Archbishop Gomez said, listing immigration, aid to refugees and the poor, racial justice, capital punishment and climate change among them, there also is the expectation that “he will support policies that are against some fundamental values we hold dear as Catholics,” the archbishop said. “This includes repeal of the Hyde Amendment and his support for Roe v. Wade.”

The 1973 Supreme Court Roe v. Wade decision allowed legal abortion virtually on demand throughout the United States. The Hyde Amendment forbids the use of federal funds to be used for abortions, with exceptions in cases of rape or incest or to save the life of the mother.

The USCCB’s quadrennial statement “Forming Consciences for Faithful Citizenship,” Archbishop Gomez said, has “a preeminent priority of elimination of abortion.”

He also listed “unequal treatment of Catholic schools,” the Equality Act and the “restoration of the HHS mandate.”

In 2011, under the Obama administration, coverage of contraceptives was added by the federal Department of Health and Human Services to a list of preventive services covered by the Affordable Care Act that employers would cover in their employee health plans without requiring a copay.

“These policies pose a serious threat to the common good whenever any politician supports them. We have long opposed these policies strongly and we will continue to do so,” Archbishop Gomez said.

“When politicians who profess the Catholic faith support them there are … problems,” Archbishop Gomez added. “And one of the things it creates confusion among the faithful about what the Church actually teaches on these questions.”

The HHS mandate included an exception for houses of worship and offered an accommodation for religious employers whereby they could ask a third party to cover contraceptives.

In separate cases, the family-owned Hobby Lobby Chain and the Little Sisters of the Poor won the right from the Supreme Court to be exempt from the mandate.

But the Little Sisters were still in litigation over it for years. A Trump administration policy exempted them from the mandate. It was challenged again in the courts, and in July of this year, the Supreme Court again ruled in favor of the religious order.

Also serving on the working group announced by Archbishop Gomez will be the chairmen of the USCCB committees on doctrine and on communications.

Archbishop Gomez reminded his fellow bishops that after President Donald Trump was elected four years ago, there were “critical issues” that needed to be addressed. “Then as now, the committee existed to address those issues and the goal was to emphasize our priorities and enhance collaboration.”

“Thank you, brothers for raising these concerns,” Archbishop Gomez said to the committee chairs who had initially raised these concerns to him, “and please stay tuned as this develops further.” The U.S. bishops were to enter into an executive session following the close of the public portion of the meeting.