Shortly after Carolyn Woo, Ph.D, retired as president and CEO of Catholic Relief Services in 2016, she began working on a major project that utilized her many talents, contacts and passions: a dialogue on “Energy Transition and Care for Our Common Home.”

As Dean of Notre Dame’s Mendoza College of Business from 1997 to 2011, she had both knowledge and contacts with leaders in the energy field. At CRS, she observed firsthand the plight of the world’s energy-deprived and materially poor. So it was no surprise that she was an invited speaker when Pope Francis launched discussions surrounding his 2015 encyclical, “Laudato Si’” or “On Care for Our Common Home.”

June 8-9, the Vatican’s Dicastery for Promoting Integral Human Development hosted 17 CEOs and board chairmen representing the world’s major oil and gas companies, renewable energy companies and major investors. The event was sponsored by Notre Dame’s Mendoza College of Business and carried the same name as the dialog, Energy Transition and Care for Our Common Home. Besides Woo, planning was masterminded by emeritus professor Leo Burke and current Mendoza Dean Roger Huang. 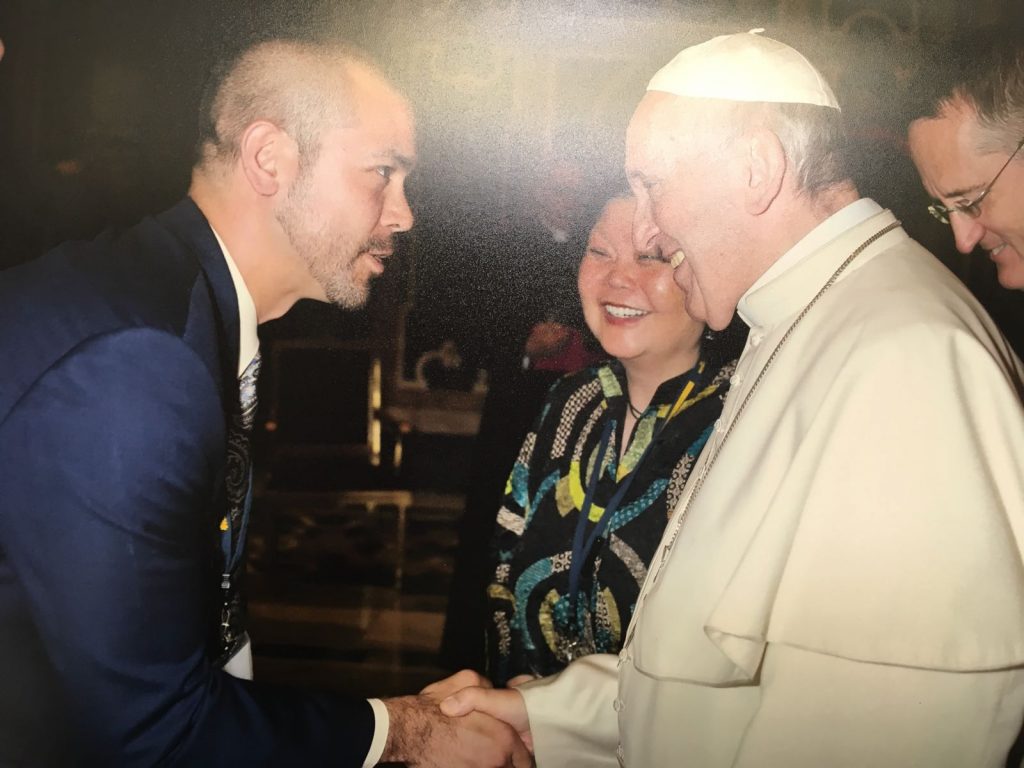 Dr. Carolyn Woo, center, distinguished president’s fellow for global development at Purdue University and retired president and CEO of Catholic Relief Services and dean of Notre Dame’s Mendoza College of Business, was an invited speaker at a recent Vatican conference for energy leaders on Pope Francis’ 2015 encyclical, “Laudato Si’” June 8-9. Justin Bartkus, Woo’s son, provided logistical support for the gathering. They are pictured with Pope Francis at the start of the conference. — Provided by Carolyn Woo

According to Father John Jenkins, president of the University of Notre Dame, “They managed to assemble for the first time in one place those people best positioned to respond to Francis’ environmental challenges as articulated in Laudato Si’. They also made real Mendoza’s mission of making business a force for good in the world. Global warming is not only a technological or business problem, but a moral challenge.”

Pope Francis addressed the delegates during Saturday’s audience. “Civilization requires energy, but energy use must not destroy civilization … Environmental and energy problems now have a global impact and extent,” he said. “Consequently, they call for global responses, to be sought with patience and dialogue and to be pursued rationally and perseveringly,” as in this meeting.

“It is my hope that, having demonstrated your aptitude for innovation and for improving the lives of many people by your creativeness and professional expertise, you will use those skills in the service of two great needs in today’s world: the care of the poor and the environment …” he continued, applauding and encouraging their “resolve and courage to work together to serve our common home.”

Carbon-based fossil fuels now account for 82 percent of the world’s energy, and yet there are 1.2 billion people whose development is blocked because they have access to no power at all. In the next 30 years that percentage should drop to 42 percent, but oil and gas companies, with their reserves, infrastructure, industries and jobs, will continue to play a major role. Whatever technologies and regulations govern the energy transition, the Holy Father and Woo are keenly aware of the moral imperative to avoid making progress at the expense of the world’s poorest citizens.

Delegates to the meeting strongly agreed on the urgent need for transition to a low-emissions economy that simultaneously provides energy to those who currently do not have access. Although sometimes portrayed as narrowly focused on the bottom line, the CEOs took a long-term view that involves a drastic change in priorities. A closing news release said, “Above all, the energy transition must be governed by care for people and their wellbeing, especially the poor, and including future generations.”

During the gathering, there was a good spirit of collaboration and engagement and an honest exchange concerning the challenges change entails, including: How rapidly can change occur, and at what cost? How can companies be more forthright about their strategic plans without misleading investors? As elders in the human family, how can we give proper weight to the moral dimension of our actions?

During two full days of meetings, there were no lectures or committees. Instead, the full group met for intense dialogue in five sessions. Each session began with a brief reflection from one energy executive and one investor, then proceeded to consider the moral as well as the practical dimensions of a complex transition.

As part of the ongoing dialogue, the group will distill the points that emerged from their conversation and send them back to the Holy Father. Cardinal Peter Turkson, prefect of the dicastery, supports ongoing dialogue, which must expand to include other sectors.

Helping facilitate this dialogue “warmed my heart,” said Woo, whose understanding of retirement has nothing to do with rest and everything to do with freedom to pursue her passions. A member of St. Matthew Cathedral, South Bend, she was happy her son Justin Bartkus was able to provide logistical support for the gathering. Bartkus holds theology degrees from Notre Dame and has been living in Rome as rector of Notre Dame’s Rome Villa. Observing the interactions among these world leaders was “a most unusual experience for a 30-year-old,” in his mother’s words.