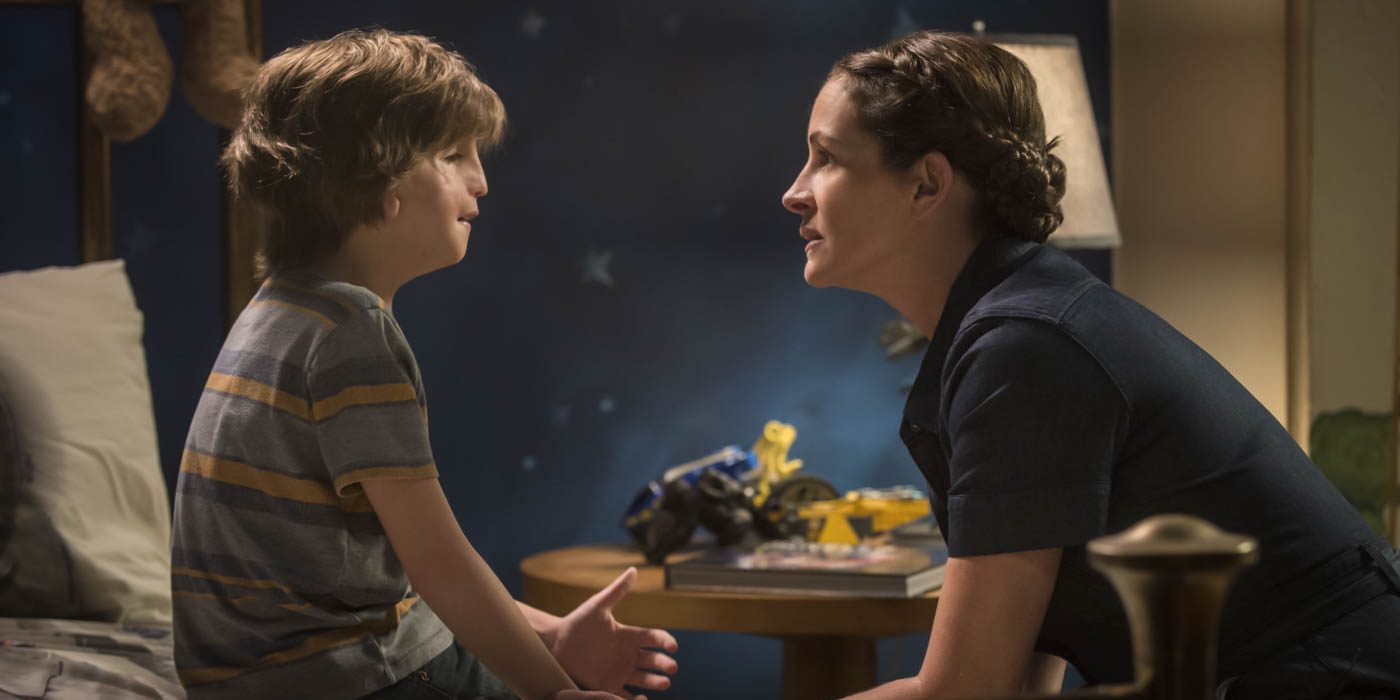 NEW YORK (CNS) — “Wonder” (Lionsgate) is a beautiful film about ugliness. Its protagonist is August “Auggie” Pullman (Jacob Tremblay), a 10-year-old boy born with facial deformities whose misshapen visage becomes a moral Rorschach test for the people around him.

This gentle, moving drama centers on Auggie’s struggle to win acceptance from his peers as he transitions from being educated at home to attending the fifth grade of his local middle school. But it also explores the lives of his supportive parents, Nate (Owen Wilson) and Isabel (Julia Roberts), and his loving older sister, Via (Izabela Vidovic).

Via gives Auggie unstinting affection despite the fact that his emotional needs have left her feeling overlooked by Mom and Dad.

Though reluctant to subject Auggie — who usually goes out in public wearing an astronaut’s helmet that conceals his face from view — to the potential ordeal of school life, Nate and Isabel know it will be the best thing for him in the long run. They find an ally in Auggie’s principal, Mr. Tushman (Mandy Patinkin), a rabbi-like figure who serves as the movie’s ethical core.

As for Auggie’s fellow students, their attitudes range from the open friendliness displayed by easygoing Summer (Millie Davis) to the cruel hostility embodied by would-be top dog Julian (Bryce Gheisar). Somewhere in the middle is Auggie’s on-again, off-again pal, Jack Will (Noah Jupe).

Though fundamentally kind and, eventually, genuinely fond of Auggie, Jack is case study in subtle variability and the negative effects of peer pressure. When circumstances enable Auggie to overhear some heartless remarks about him that Jack makes simply in order to fit in with the crowd, the effect is devastating. A later scene in which Julian comes to recognize the full impact of his bullying also carries a wallop.

Subplots involving Via’s best friend, Miranda (Danielle Rose Russell), and newfound love interest Justin (Nadji Jeter) reinforce the idea that all of us are potential heroes or villains. Though some of the people in Auggie’s world are wholly good — his parents and Justin, for example — no one is presented as irredeemably wicked.

In adapting R.J. Palacio’s 2013 best-seller, director and co-writer (with Steven Conrad and Jack Thorne) Stephen Chbosky has created a winning and memorable film about the significance of ordinary life and the lasting impact of everyday choices. Despite a few mature elements, the movie’s valuable lessons make it appropriate fare for most teens.

The film contains a scene vaguely referencing married sexuality, fleeting scatological material, a couple of fistfights, one use of profanity and a single mildly crass term. The Catholic News Service classification is A-II — adults and adolescents. The Motion Picture Association of America rating is PG — parental guidance suggested.