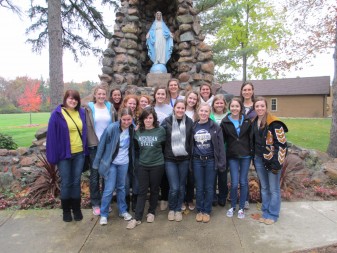 Students of the Bishop Dwenger class on the dignity and vocation of women are pictured at their one-day retreat with the Dominican Sisters of Mary, Mother of the Eucharist at their novitiate at St. Felix Oratory in Huntington. Bishop Dwenger teacher Jessica Hayes is pictured in the back row of the photo, furthest to the right.

FORT WAYNE — A new theology class at Bishop Dwenger High School is drawing rave reviews from students, parents and Bishop Kevin C. Rhoades. And the veteran teacher of the class is calling it “the most rewarding thing I’ve ever done as a teacher.”

The “Dignity of Women” class was offered for the first time this fall as a one-semester theology elective for seniors. Bishop Dwenger is thought to be the only Catholic high school in the country to offer such a class.

Jessica Hayes, who has taught theology for 14 years at Bishop Dwenger, developed the class over the past year. She told Today’s Catholic that the seed for the class was planted about six years ago, when she attended a conference on the 20th anniversary of “Mulieris Dignatatem,” Pope John Paul II’s 1988 apostolic letter on “The Dignity and Vocation of Women.”

The late Sister Jane Carew, then director of the diocesan Office of Catechesis, attended the conference with her and suggested the idea for a class on the topic. Hayes told Today’s Catholic that she had forgotten about that suggestion until she started putting together the curriculum and remembered Sister Jane’s idea, crediting her for the inspiration.

Even though Sister Jane died nearly two years ago, Hayes said, “I think she still wanted me to do it.”

When Bishop Rhoades visited Bishop Dwenger in January, Hayes approached him about developing the class. Bishop Rhoades was enthusiastic about the idea, so she compiled a comprehensive reading list, ranging from saints and popes to contemporary writers. Hayes, who has a master’s degree in theology from Franciscan University, said all the readings she chose were works she has studied.

The class was subsequently approved by the school and the bishop, and offered to senior girls for the fall semester.

“Some of the boys were interested in taking the class too, which is great,” Hayes said. “I think they should study about the dignity and vocation of women also, but what I wanted for this course was for the girls to be more free to share their own thoughts, without worrying about the reaction of the guys in the class.”

Hayes said that some boys are asking that a class be developed for them, too, and she sees that as a possibility for the future, as the boys would benefit knowing what the Church says about the value of women, and there is plenty of material about the dignity and vocation of men, as well.

Seventeen senior girls enrolled in the class, all meeting a prerequisite of having at least a B average in theology and English, as some of the reading is challenging, and students are required to write several papers. Still, Hayes was amazed at how hard the students have worked and how well they have accepted and understood the material.

“They have been wonderful. It’s really been for me very encouraging, because they are so interested and enthusiastic,” said Hayes. “They’re doing their reading, and we have these discussions each day; and it’s just really been beautiful to hear their insights into their reading and how they apply it to their spiritual life and adapt it to their prayer life.”

Hayes said that the class readings have helped students see where their own culture has gone wrong, and how easy it is to accept the cultural “lies” that tell women their worth lies only in physical beauty.

Student Morgan Kinniry commented that the philosophy of the dignity of women is often overlooked in today’s society, so she has been pleased to learn more about the active and important role of women in the Church. “Every day is like a spiritual retreat,” she said. “Class discussions we have are always full of deep insights.”

Hayes said that the students surprise her every day. “I’m finding in the class discussions and in their writing there is a greater depth to what we’re doing as a group than a lot of the ministries I’ve been involved with in parishes at the adult level. And I’m really surprised by their spirituality, by how much they love the Church and are willing to learn about it and read about it and work really hard to understand it and put it into practice.”

Student Catherine Yanko explained that the first-hand examples of women they have studied helped her to “embrace the genius of feminine vulnerability” and to understand the natural law of women’s nature.

Hayes said that some of the students have indicated they would like to keep up their discussion next semester outside school hours.

“This class is truly special,” explained student Emily Sedestrom. “It’s not just a great class — it’s a great group of girls. There is a level of trust and honesty in the group. God has really blessed all of us. Every day, I find new inspiration for my faith.”

Hayes also has been struck by the feeling of community in the class. She said she had planned to help students realize the true measure of their dignity, but did not foresee the bond that would develop among the students.

“I did not plan on this course forging a community, though now that I think about it, we study Truth, who is ultimately a Person drawing us to Himself,” she said. “The desire we have for this course to continue in some way is a testament to that.”

Reaction to the class has been so favorable that Bishop Rhoades told Today’s Catholic he has shared his positive opinion about the class with the principals of the other three diocesan high schools, so that their theology departments might also consider it.

“I was deeply impressed by both the content of this excellent course and by the theological depth of the young women in the class,” Bishop Rhoades told Today’s Catholic. “It was great to see their enthusiasm for the study of the Church’s rich teaching on the dignity and vocation of women. They were reading some great works of profound Catholic thinkers like Blessed John Paul II and St. Catherine of Siena.” He added, “I commend Miss Jessica Hayes for instituting and developing this course, which is probably unique in our nation’s Catholic high schools.”