Around 250 women were encouraged to “Claim your peace and joy” at the Kingdom Builders conference Oct. 3 in Fort Wayne. Featuring three female Catholic speakers as well as adoration and Mass with Bishop Kevin C. Rhoades, the conference was the first of its kind to take place in the Diocese of Fort Wayne-South Bend. Because of its success, Kingdom Builders founder Mary Jo Parrish plans to make it an annual event.

The talks focused on the uniqueness of every woman and the gift of God the Father’s love for each one of them. Parrish, who begins each monthly Kingdom Builders gathering with humorous stories of her life, put participants at ease with a story that demonstrated her own imperfections. She then launched into three basic requirements for women to reclaim their inheritance as daughters of the King: relationship, identity and mission. “When we embrace the beauty of our design and identity, then we are fully alive,” Parrish said. 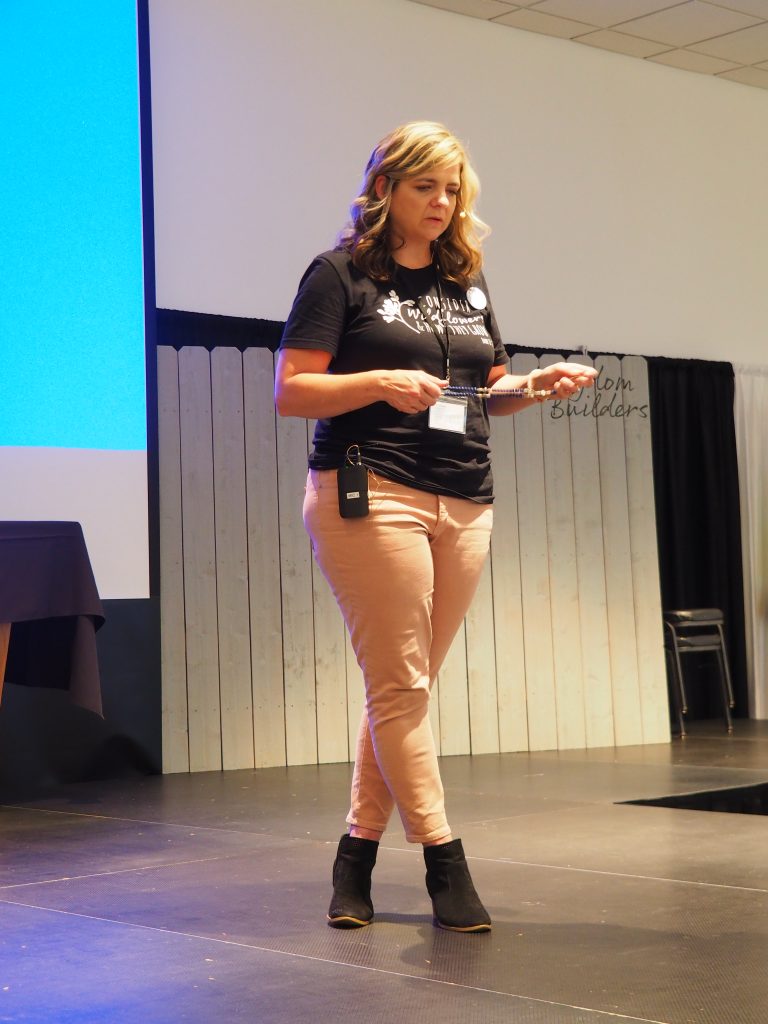 Giving examples of saints who, while imperfect, still fulfilled the missions that God set before them, she continued, “God will use anyone. … Stay small; let God be big.”

She called them to seek out what God has planned for each of them, and to rely on God rather than their own power. “The Father will never lead you anywhere except to that which brings you the most peace and joy,” she reassured. 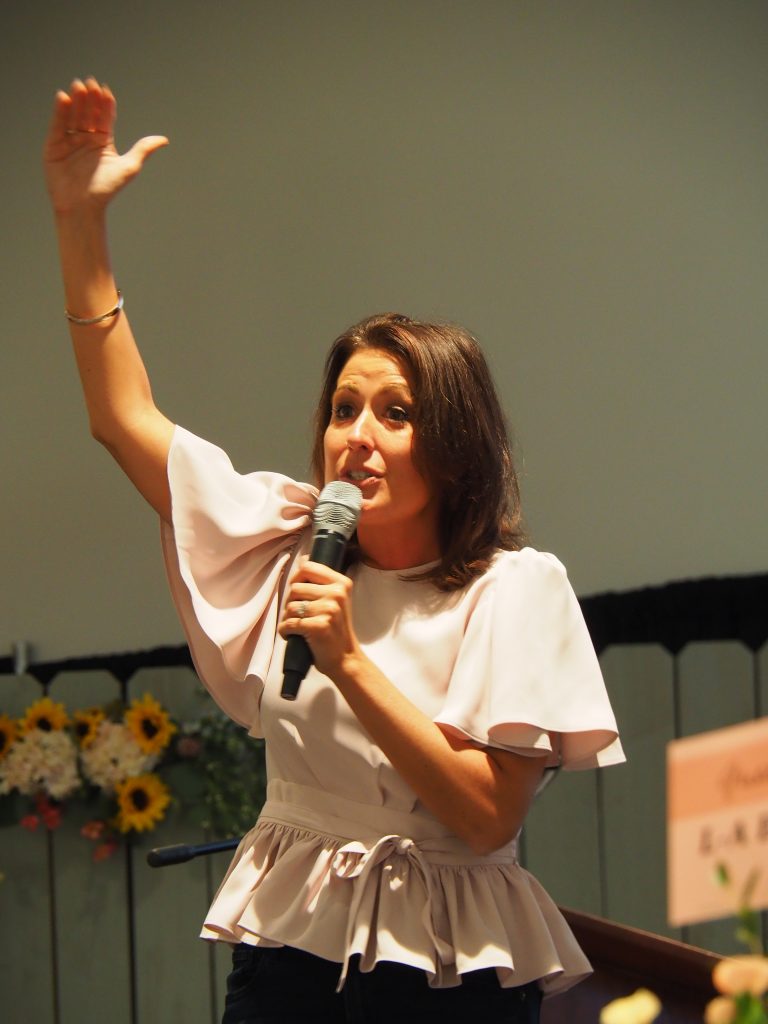 Saying she considers herself more preacher than speaker, Amber DeMatte’s dynamic talk at the Kingdom Builders Oct. 3 conference in Fort Wayne was about becoming the unique person God created each woman to be.

During her talk, Catholic author and dynamic speaker Amber DeMatte repudiated the idea of a model one-size-fits-all Christian woman. “There is no mold,” she boldly declared. “The Father needs you. The Father is breaking molds today.” She empowered the women present to reject the lies and negative thoughts others have placed on them and instead look to the Good Shepherd for the truth of who they are in Christ. “It’s not about what we do, but who we are. We can’t undo what Jesus has already done for us.”

The readings at Mass were specifically chosen to speak to women’s hearts, particularly the story of Martha and Mary from the Gospel of Luke. In his homily, Bishop Rhoades referenced the story in relation to St. Mother Theodore Guerin, whose feast fell on the same day as the conference.

“Mother Theodore lived a busy life and drew strength from prayer, from conversations with God, with Jesus, and with the Blessed Virgin Mary. Through years of hardship and sacrifice, her faith remained strong because she knew in the depths of her soul that God was with her and always would be with her; a constant companion. Like Mary in the Gospel, she chose the better part: the ‘unum necessarium,’ the one thing necessary.

“I pray that as Catholic women, you are inspired by the example of St. Theodore and also assisted by her prayers. Through her intercession, may you continue to grow in your trust in Divine Province and your love for Jesus.”

The final speaker of the day was Sister Bethany Madonna of the Sisters of Life in New York, whose talk was intended to be a preparation for adoration. Because of current travel restrictions she was unable to attend in person; instead, she recorded her talk, which was shown on two large screens.

Sister Bethany imparted touching stories of her order’s work with post-abortive women and how they minister to moms in crisis. She emphasized that women need to “rest in His love” and “find your peace in His mercy.”

Only a short time after the first parish-based Kingdom Builders meetings were launched, Parrish came up with the idea for a women’s conference but did not know how to make it happen. She stated, “The men have a conference and they have for over a decade. Our women, they need to be fed; they’re hungry, they’re thirsty for the Lord.”

Parrish mentioned her idea to Allison Rowe, a member of the team, who jumped on board to bring it to fruition. With the aid of the diocese, along with a group of women with different talents, they were able to plan the conference within a year. Rowe said, “I feel like I was in the right place at the right time, or the Holy Spirit brought it together.”

An immense amount of work went into pulling the plans together and beautifying the space to make women who constantly sacrifice their own time “feel cherished and loved,” said Parrish.

The reaction of the participants was Rowe’s reward for the team’s efforts. “I feel like the evil one tells me that I’m unworthy a lot, so throughout the process many times I felt like I shouldn’t be doing this, that I was unworthy. Leading up to this week, it was like, ‘I can, and it’s worth every sacrifice to see it come together.’”

The entire event was centered in prayer. Members of the Kingdom Builder prayer team prayed over each seat the night before the conference, asking God’s blessings on the woman who would occupy it. An adoration tent was set up outside the conference hall, staffed throughout the day by members of a new men’s group called Armor of God, who wrapped the women in a constant blanket of prayer. Many of the participants said this was incredibly meaningful.

Though the conference had originally been planned for 1,500 women, COVID-19 restrictions limited the number to 250. Sara Hammon was one of the attendees from outside the diocese. A stay-at-home mother of three, Hammon traveled from Ohio at the suggestion of her parish deacon’s wife to see what Kingdom Builders had to offer. She longs to start a women’s prayer group in her own parish.

“I’ve never been to anything like this. It’s amazing,” Hammon said. “My husband goes every year; he comes to Fort Wayne-South Bend to the men’s conference. He’s loved it, and I’m like, ‘I don’t know what that is.’ I’ve never felt that; I’ve never felt on fire. So to come here, I just feel this is for me.”

Like many of the women, Hammon was grateful for the opportunity to connect with other women on a spiritual level.

“These women are just like me in that we love Jesus Christ and we love the Eucharist and we just want to get closer to heaven; we want to be those saints someday.” 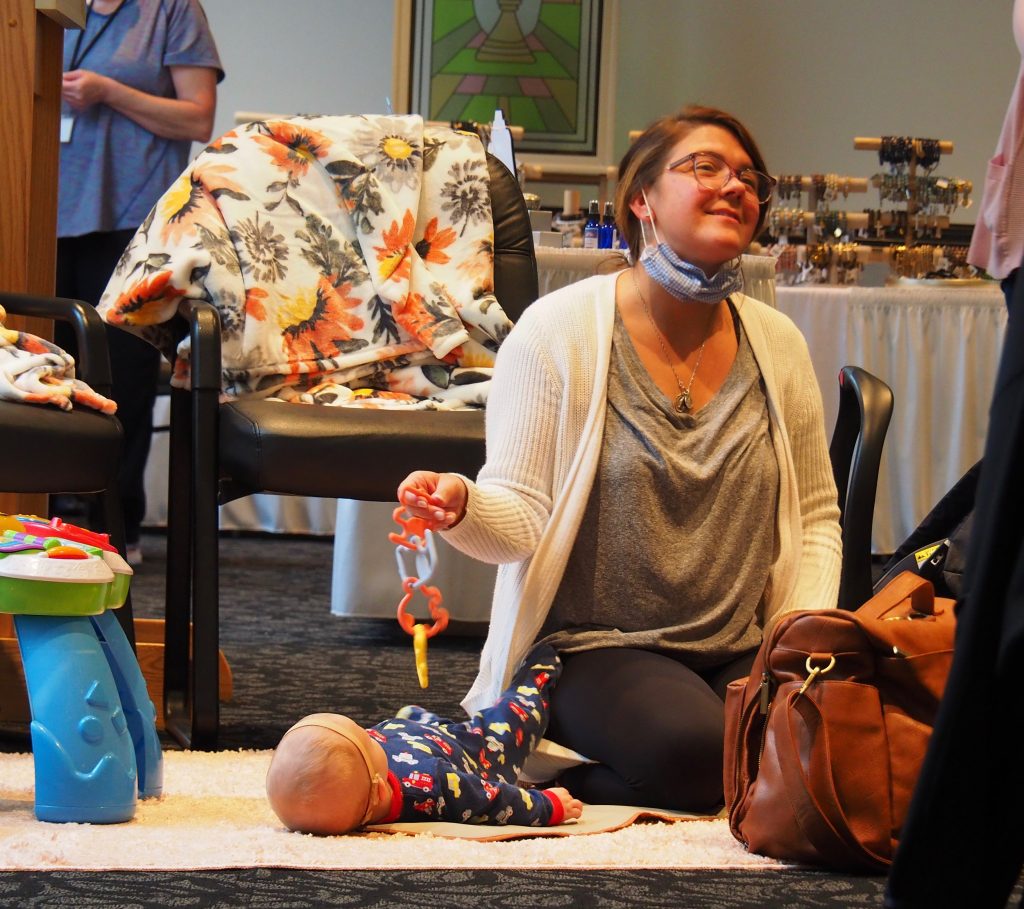 Conference planners tried to consider every physical need that might arise for those attending the conference — so a mother’s station with toys and blankets was prepared.

In attendance were moms with babies, older women, college students, single women and grandmothers. More than 30 parishes throughout Indiana, Ohio and Michigan were represented, including at least four Protestant churches.

“Kingdom Builders is absolutely life-changing,” said Judi Ueber, who attends monthly meetings at St. Charles. “It just fills all the voids, all the gaps in terms of faith life and explodes it. The opportunity for adoration, the fellowship with the women; it’s just full of prayer, praise and worship.”

Tasha Williams has been a member of the apostolate for several months and eagerly awaited the conference. “I look forward to Kingdom Builders every month, so I was excited to have that feeling for the entire day.” She loved the experience and the similar messages of the speakers. But most important of all was spending time with God. “Part of it for me is just taking a day to just be focused on the love of the Father and the faith. Sometimes it’s hard to carve out time, so it’s just exciting to have that time.”