The image of Divine Mercy made it all the way to the Indiana High School Color Guard Association state finals this year with the Bishop Dwenger High School winter guard. Don Cochran is band director at the Fort Wayne school, overseeing all the programs associated with that. He and his wife, Mindy, the school’s life skills counselor, began working there in 2016. Mindy assists with many band programs, including the color guard. Together, they look for ways to bring the Catholic faith into the spotlight – literally – through the girls’ routines.

Don stated, “Over the last several years, we’ve tried to find things that the kids could connect with, so we have asked our coaches to try to tie it into something based around our faith.”

This was the first year Don and Mindy had the privilege of seeing their students perform at the state level. The team did not place at state, but that doesn’t take away from the evangelization opportunity their performance presented. The routine, set to Christian duet For King and Country’s song “God Only Knows,” focused on the image of the Divine Mercy, as seen by the visionary St. Faustina Kowalska in 1930s Poland. 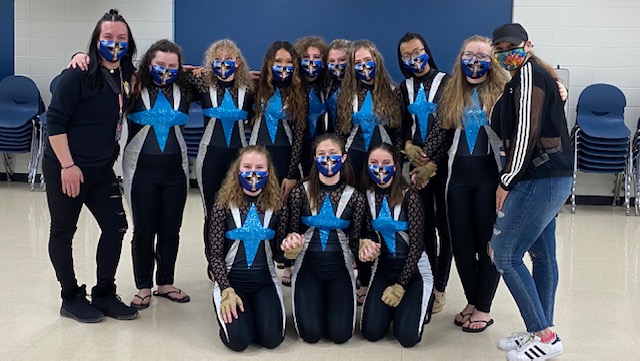 It seemed providential that the color guard coach, Danielle Burgett, was motivated to create a routine based around the image. Burgett is not Catholic. Yet, her love of her craft and deep respect for her students and their faith helps her to merge the Cochrans’ request with her own creative vision.

“She came up with that song and she found this image of Jesus from the Divine Mercy, but she had no clue what it was,” Don remarked. “The students themselves are actually able to talk to her about St. Faustina and they helped to educate her on it.”

Both he and Mindy are astonished by the influence the students’ faith life has had on Burgett over the last four years, even to the point where she requested prayers from them during a difficult pregnancy.

After the initial backdrop design failed to meet the team’s expectations, Burgett returned to her original inspiration, with a 6-foot poster of the image and rolls of blue and red fabric for the rays of light coming from the Sacred Heart of Jesus. Don sent a high-quality image of the picture to a local printer, who completed the order within three days. The team was able to perform that weekend with the new background. 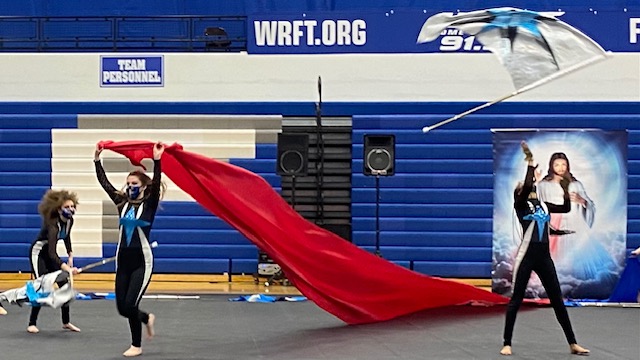 Photos provided by Mindy Cochran
With the image of the Divine Mercy as the focal point of their main routine this year, the Bishop Dwenger High School winter guard used the beauty of their craft as a means to bring the Catholic faith into the spotlight

Don estimated that the girls on the team probably put in hundreds of hours of practice this season. During that time, he said they were “able to meditate on the image from the Divine Mercy Chaplet. I just think it was absolutely beautiful.”

Having been involved in color guard for 17 years, Burgett has a good understanding of the judges’ expectations for routines, particularly when it comes to schools that profess a religious identity. Rather than shying away from bold demonstrations of Christianity that could be perceived as objectionable, Burgett said she knows that routines that explore that faith make a strong statement about the school itself.

“The judges really enjoy seeing faith-based schools doing faith-based shows because public schools don’t have that same connection,” she explained. Not only that, but the girls that she coaches at Bishop Dwenger are able to draw on their faith to portray the emotional aspects needed to bring the show’s story to life. “What I did last year was try to find a show that not only was faith-based … but also something that was kind of close to the students.”

Last year’s show was called “Faith” and featured a cross for the background. To the performers, Burgett remarked, “the faith-based most definitely works for them because they have that strong relationship with it that you don’t see in public schools.”

“I think it’s so exciting that she’s able to create these shows that the kids can evangelize with,” Don added. “She’s talking a lot in terms of dance and in terms of expression, but that crosses over to where she’s teaching stories of our faith in a public-school atmosphere.” Very few schools that Bishop Dwenger competes against are Catholic or even Christian, so this might be one of the scant opportunities to bring the Christian faith to light for students and parents at those schools.

The students’ expression of their Catholic faith through the routines has already impacted others outside of Bishop Dwenger. Mindy shared how sometimes the judges will comment on the faith-based aspects of the show, and a photographer for the IHSCGA always tells them how much he enjoys their shows. And at St. Jude School, where the Cochrans’ daughter showed the video to her teachers and principal, they were duly impressed. “People that understand and know what it is, they’re like, ‘Wow!’” Mindy commented. 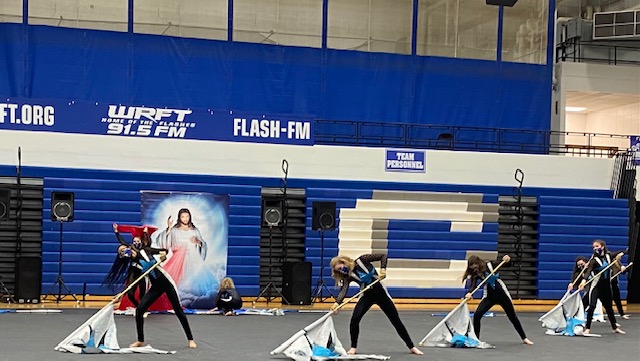 Parents are also pleased with the routines their daughters take part in, Don said. “We’ve got numerous messages from parents on how much they appreciate that we’re trying to tie in pieces of our faith with what they’re actually competing with. They believe that that’s a good message for their kids.”

For next year’s routine, Burgett is looking toward the apparitions of Mary at Fatima for her inspiration. Over the next few months, she will have to learn about the apparitions and associated miracles if she hopes to bring it to fruition.

“The hardest part that I struggle with is making sure I’m representing their faith in the correct way and in the truest form that I possibly could.”

Don and Mindy are excited to see how the Fatima plans come together and hope that next year the girls team will advance to state again. The team is relatively young, mostly comprised of sophomore and freshmen students.

Mindy is also pleased with how the girls stepped into leadership roles and how they have adapted to pandemic restrictions. Most of all, the Cochrans are proud to see the students living out their faith with each performance.