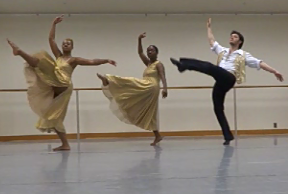 Before their May 20 concert, the dancers and musicians in “Wings of Dawn” gathered in a circle. “Use us and our art as a means to glorify your name and communicate your love to others,” they prayed. Director Carolynn Hine-Edington explains that this takes a lot of pressure off the dancers. Of course they try to do their very best for their Lord, but everything doesn’t depend on them.

Hine-Edington has taught people to dance for most of her life, but this performance on the parish center stage at St. Therese Little Flower Church was the first major concert for the new contemporary ballet company “Wings of Dawn,” formed to praise the Lord through dance. A dozen semi-professional dancers ranging in age from 20 to 50 belong to the company. Most of the songs were written and sung by Hine-Edington’s husband Bryan Edington, whose Celtic group Pure Green features violin, guitar and vocalists.

“We are so pleased with how everything came together,” Hine-Edington exclaims. Dancers mentioned afterward that they had such a strong sense of the Lord guiding them, their performance was almost effortless. “Songs My Mother Taught Me” brought tears both to the dancer/choreographer and to her mother, sitting in the audience.

The Wings of Dawn dance company perform the piece, “You’re Not Alone,” composed (music and lyrics) by Bryan Edington; and Choreographed by Carolynn Hine-Edington. The dancers from left to right are: Zoe Curry, Sardius Giden and Patrick Watterson.

The name “Wings of Dawn” is taken from Psalm 139:9-10, where the psalmist uses the term to indicate one of the four compass points that also form the sign of the cross. In the airy opening number, dancers held pieces of chiffon that floated across the stage in the colors of dawn.

St. Therese Little Flower is the Edington’s home parish. Parish children wearing wings helped with the song “Angels,” they are eager to repeat their role. “You can see God in every concert piece,” says Hine-Edington, though the evangelistic messages in this gentle ministry ranged from explicit conversion stories to wholesome songs that were just fun for everyone.

In “You Are Not Alone,” a single male dancer stood “on the edge,” in a very dark place. At first he didn’t even notice the five angels on stage with him, but by the end of the piece they were carrying him across “burning sands.”

The concert concluded with “I Wonder,” a song so joyful Hine-Edington calls it a “thigh-slapper.” During it, dancers went out into the audience, shaking hands and saying, “God bless you for coming.”  After that, audience members gave them a standing ovation. Some approached in tears. “That was beautiful! I really felt the Spirit of the Lord.”

Hine-Edington has always found it hard to sit still during worship; dance is the most natural way in the world for her and the others in her company to praise the Lord. Besides Little Flower, dancers belong to St. Matthew Cathedral, St. Pius X, St. Patrick, Sacred Heart, St. Joseph in LaPorte and several Protestant congregations. They already have an invitation from one youth group and hope to be able to dance in other diocesan churches and schools.

Hine-Edington became a Catholic in Philadelphia while studying for her Ed.D. at Temple University. Besides choreographing, she teaches dance at IUSB.

She and Bryan met when her first husband, Scott Johnson, heard Bryan perform on Valentine’s Day, 2003, at Fiddler’s Hearth in South Bend. Since Carolynn often did flamenco dancing, Scott insisted they meet the best flamenco guitarist he had ever heard. After both Scott and Bryan’s wife, Janet, died of cancer, the widows kept running into each other until they agreed to join forces personally as well as professionally. They strongly feel that the Holy Spirit brought them together, and they are very excited about doing concerts together.