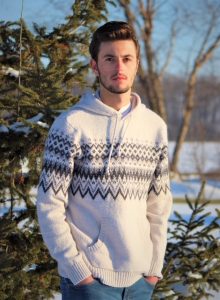 After attending St. Louis Academy for eight years of Catholic education, Heritage High School valedictorian William Oberley embarked on a new venture in the realm of public high school. The experience was not without its moments of testing his faith.

“[My faith] has given me the strength I needed to persevere, even when I felt that I may have had too much on my plate,” he said. “It has also assisted in my endeavors to make friends. I think my strong beliefs made me more approachable and friendly to people I met. High school also gave me my first real experience in telling others about God, because I had been surrounded by Catholics nearly all my years prior. That allowed my own faith, and hopefully the faith of those around me, to grow.”

Oberley’s main interests involve “hard sciences,” which influenced his decision to attend Purdue University, West Lafayette, in the fall to pursue an aerospace engineering degree with a minor in software engineering or business. For fun, he reads and watches movies about space, technology and exploring. He also enjoys discussing movies and music with his friends.

His accomplishments include being a member of the Heritage High School Student Council for four years. In addition to rigorous academic pursuits, Oberley is an athlete as well, playing golf and soccer for four years — defense in soccer, lettering his senior year. In golf, he lettered during his last three years. His freshman and sophomore years he also played basketball, which he traded to participate in an indoor soccer team with Heritage players during junior and senior years.

He was also a member all four years of the Grillers, a group of students who met early and tailgated before football games. He participated in his church youth group at St. Louis, Besancon and the Fellowship of Christian Athletes for four years.

Oberley has a few special memories he hopes to carry with him as he enters adulthood. The long bus trips with his teammates going back and forth to games were natural conduits for casual conversation and lots of laughter. He remembers, too, that Honors English classes, though challenging, were less so because he was among good friends who helped lighten the load. His parish youth group trips to Cedar Point were both recreational and an opportunity for him to be among like-minded teens who encouraged his Catholic walk, he said.