In biblical times, a widow occupied an undesirable place in society. God had commanded that they were to be treated with respect and cared for, but they were not considered productive members of the community.

Not so, the Widows of Prayer. Their stature may not be that of giants, but their prayerful contribution to the Diocese of Fort Wayne-South Bend is mighty — especially in the eyes of the priests who benefit from those prayers.

“It’s wonderful to have a dedicated group of ladies to pray especially for us as priests,” said Father Tony Steinacker, pastor of SS. Peter and Paul in Huntington. He calls the ladies “prayer warriors” and praises their dedication to the life God called them to.

The Widows of Prayer are not religious sisters, but sisters in Christ who have committed themselves to a devout prayer life and have made personal promises to live lives of simplicity, chastity and obedience. 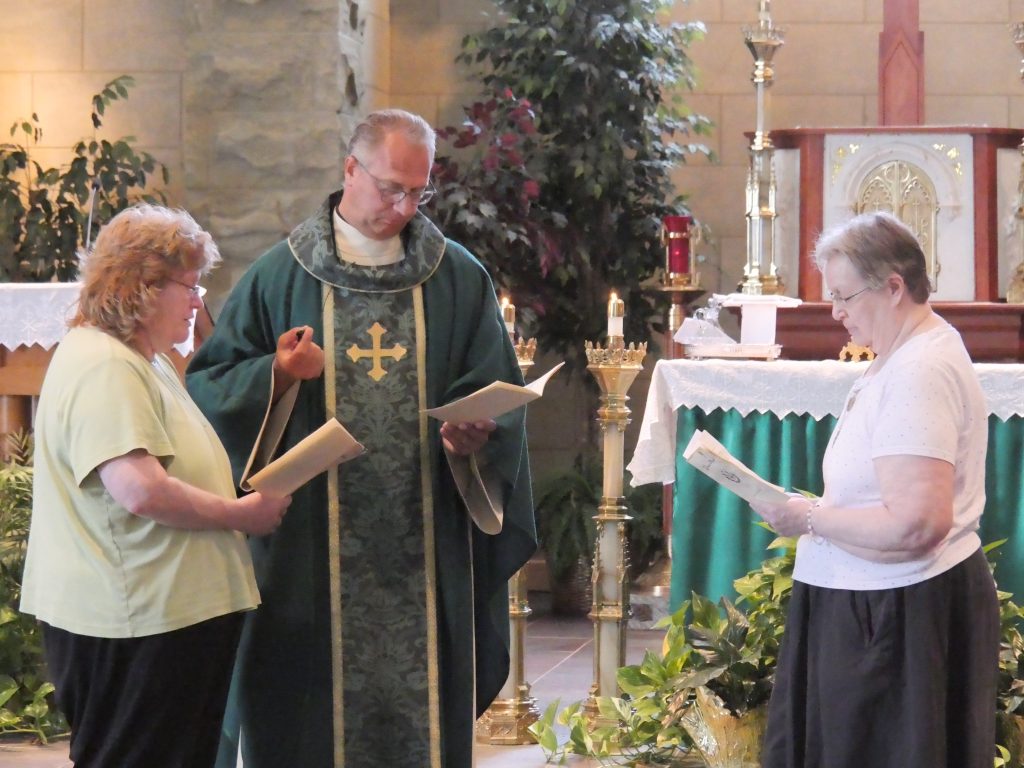 The process to become a Widow of Prayer involves three years of discernment; three promises made to the apostolate after her first, second and final year.

Of course, to become a member, one must first be a widow, so many of the members are older women who can dedicate themselves to a sacred prayer life. They also promise never to remarry, believing their vocation to now be spiritual rather than an earthly one.

On Wednesday, July 28, a handful of members made their promises to the Widows of Prayer at St. Mary, Mother of God Parish in Fort Wayne. One was a remote member, from the South Bend area, who made her final promise. 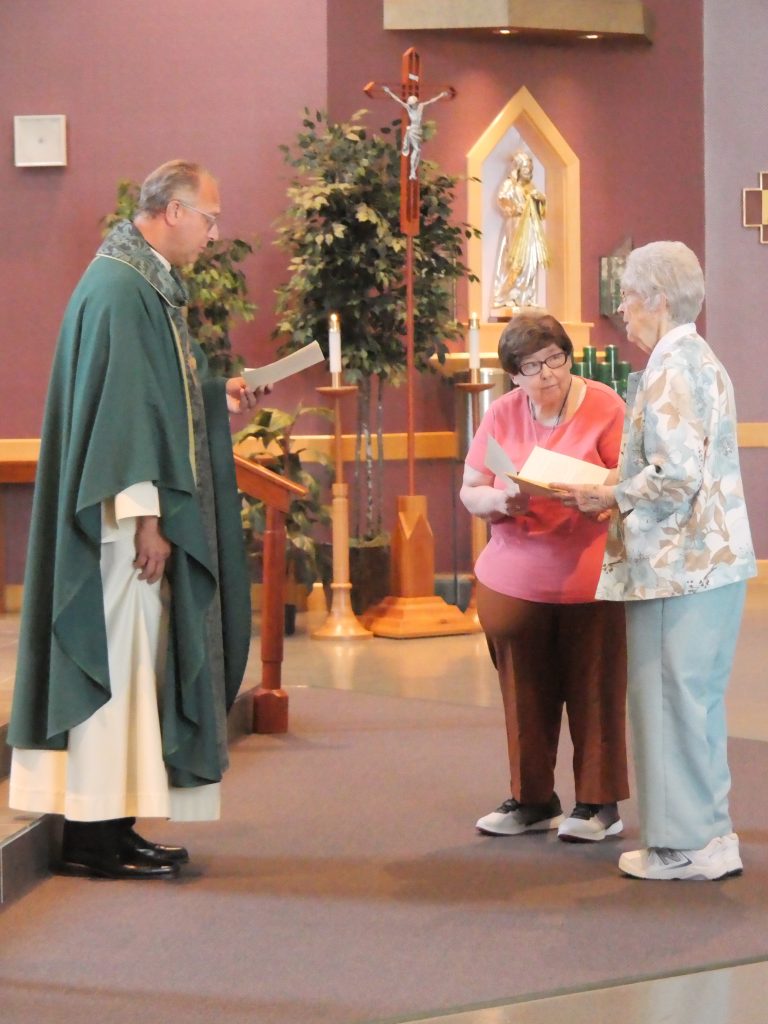 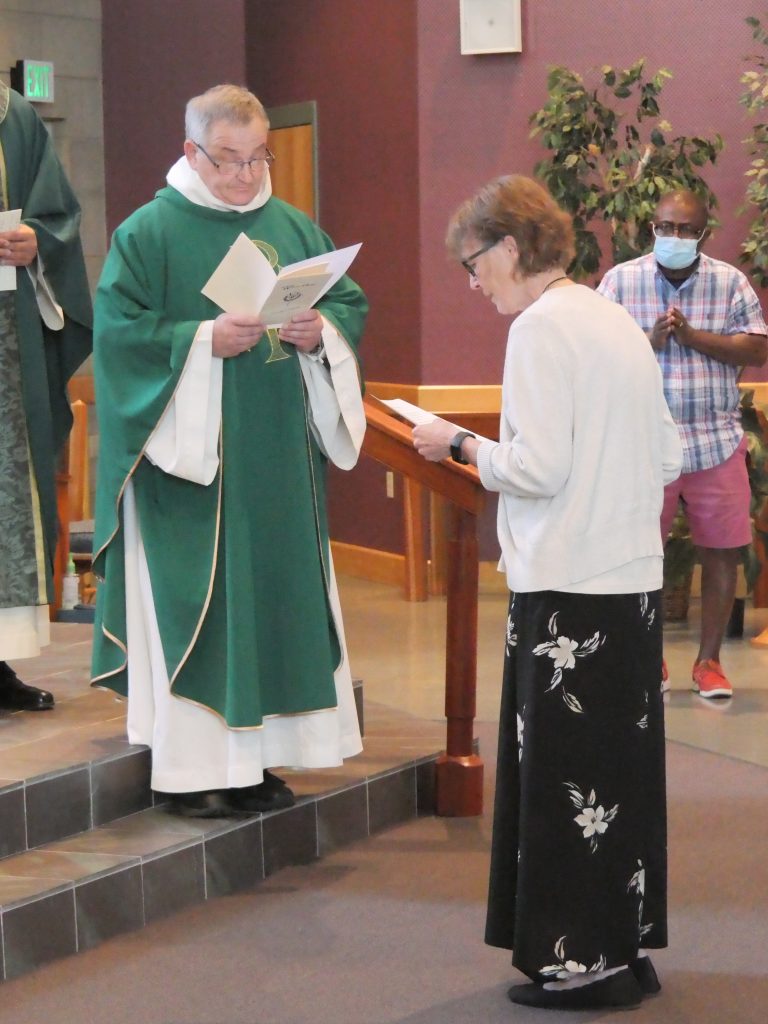 Mass was concelebrated by Father Steinacker, chaplain of the Huntington chapter of Widows of Prayer, and Father Glenn Kohrman. The general servant leader of the order, Alice Peeters, and the assistant servant leader, Carlotta Stricker, drove from Appleton, Wisconsin, where the ministry was founded and is now based, to witness the event.

Stricker explained how the Widows of Prayer are a re-creation of the order of widows from Jesus’ time that has lasted for 300 years. The apostolate’s focus is praying for the priests who serve the Church.

Stricker said, “We have to pray for our priests. We need more good priests, because without them, we would not have the Catholic Church. And this is what our Blessed Mother has asked of humanity from the very beginning.”

One prayer warrior in attendance that day declared that she faithfully prays not only for priests, but for all the bishops in their sometimes-difficult roles as leaders of the Church. 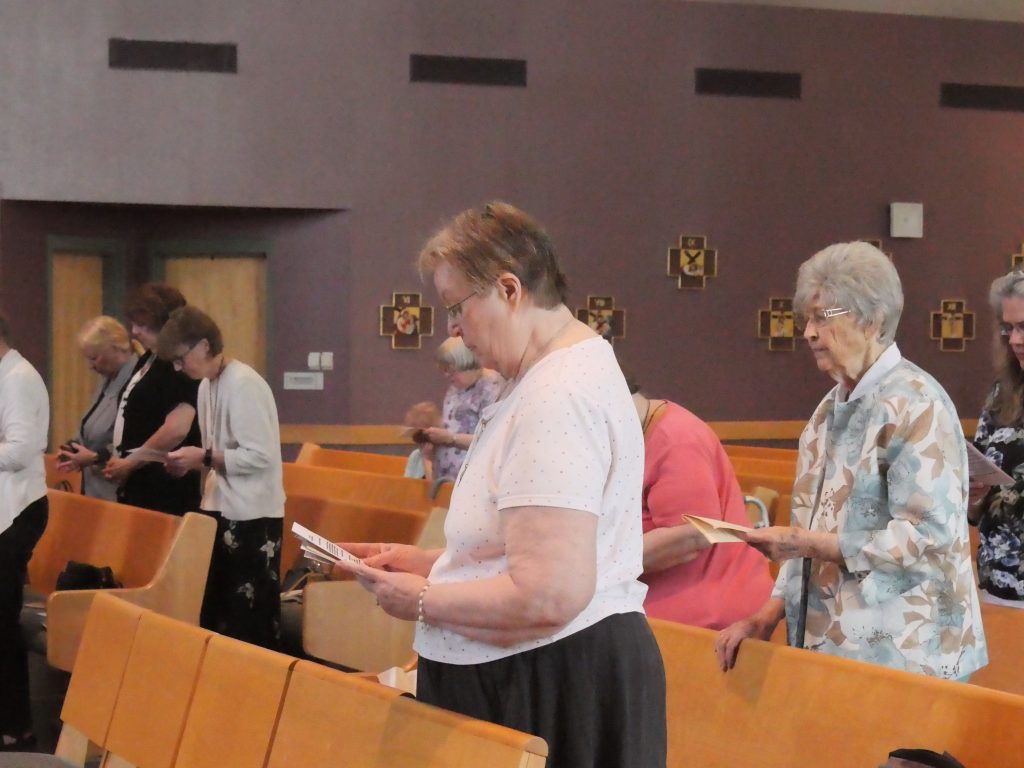 Fitzgerald leads other members of the apostolate in prayer for the deceased members of each of the seven chapters.

There are two local Widows of Prayer chapters; Huntington was the first, and later the Fort Wayne widows established their own group. It is hoped that the South Bend area will see a community established soon. Father Kohrman attended the Mass to witness Kathy Heying make her final profession, because Heying is a member of his parish of Holy Family and the only professed Widow of Prayer in the South Bend area for now.

When she was searching for a religious community that accepted older vocations, Heying learned about the Widows of Prayer from Bishop Kevin C. Rhoades. It took her about five years to finally explore the apostolate and decide that it was right for her.

“I’m very happy, I’m very at peace,” she remarked. “I guess all those years of searching, this is where God really wanted me. I love praying for the priests and praying for my family.”

“Clearly, I think the tradition in the Scriptures would be the holy widows,” he said. “Anything to foster that kind of devotion to prayer would be a good thing. I’m certainly more than open to doing whatever I can to facilitate that on the South Bend side of the diocese.”

After the Mass, Father Kohrman learned that his mother Bonnie, who died in 2004, was a Widow of Prayer candidate — although another widow said she believed Bonnie made her final promise on her deathbed.

“She was very much a prayerful woman, and anyone could talk to her, she was very easy to talk to,” Father Kohrman said of his mother, stating that it was “kind of a cool thing” to learn about her dedication to the ministry and he was eager to share the discovery with his siblings. 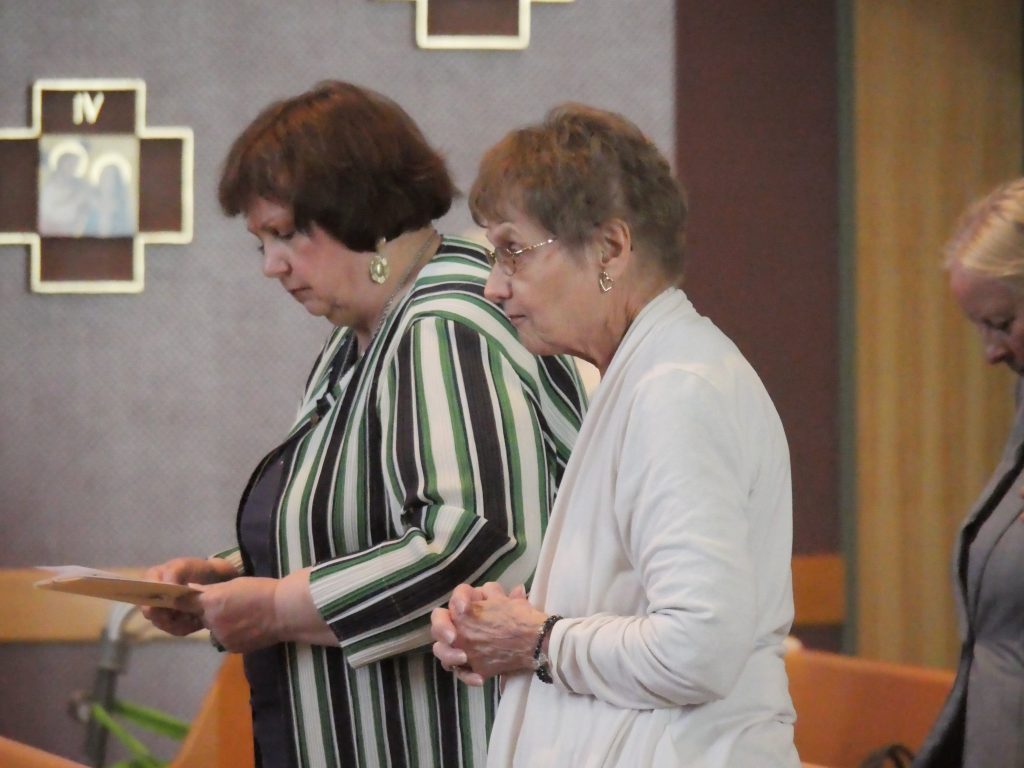 Bonnie was not the only mother of a priest who became a Widow of Prayer. Mary Elizabeth Voors, the recently deceased mother of Father David Voors, was a member of the apostolate. Her obituary reads that after her husband’s death, she began “meeting, praying and working together for mutual support and common prayer for the Catholic Church and its leaders.”

This is what draws many of the widows to the apostolate.

“I like my prayer life. I think I’m doing what the Lord wants me to do in the present time of my life. I like being with all the ladies; they’re all wonderful, wonderful women,” said Mary Lou Sohn, servant leader of the Fort Wayne chapter and a professed Widow for around 15 years. She was introduced to the apostolate through a friend in Huntington and helped start the chapter in Fort Wayne. While she is a member of St. Jude, she speculated that nearly every parish in the city is represented by at least one member of the Widows of Prayer.

According to Peeters there are seven communities of Widows of Prayer, mostly in the Midwest, and 56 insignia-wearing members. She would love to see increased growth, knowing the power of prayer.

At one time there were 120 members, but many have passed on and were remembered in prayer after the Mass on Wednesday.

Peeters gets to witness the joy of new members making their pledges and has deep admiration for the members, describing them as “beautiful women, being able to make promises, coming from devastation sometimes because of all the downfall when you lose a spouse, but getting up and going on from that.”

Today, these strong women contribute to the Catholic Church by lifting up priests, seminarians, bishops and Church leaders in prayer each day. The diocese has seen an increase in vocations in recent years, attributed in part to the intercession of the women who seek to emulate the holy widows of the Bible, particularly the Blessed Mother.

To learn more or become a Widow of Prayer visit widowsofprayer.org, which lists the contact information for local chapters.