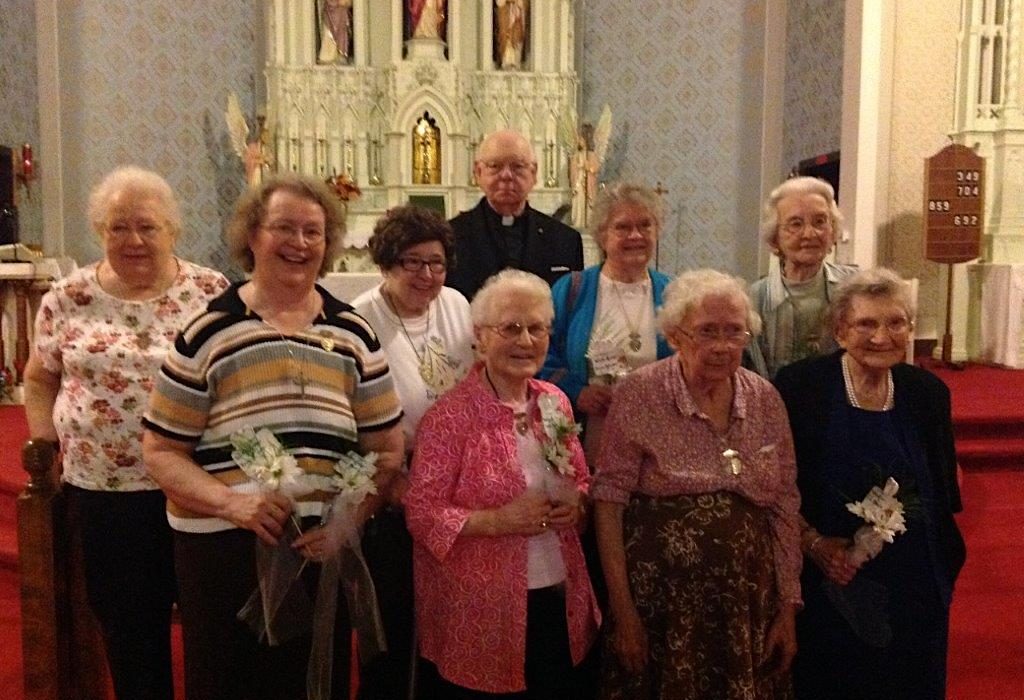 The Widows of Prayer is a consecrated, lay community composed of widowed, practicing Catholic women who were married in the Catholic Church. The mission statement for the organization calls for the widows to “serve Christ through His Church by praying for priests and others in Church leadership, to be devoted to the Blessed Sacrament, and to promote Adoration of Christ in the Eucharist.”

Women who choose to become members of the Widows of Prayer devote a minimum of an hour to daily prayer: This time can be dedicated to the rosary, adoration, daily Mass, the Divine Office or mental prayer. They must also be willing to attend prayer gatherings and meetings, and engage in outreach. “The Widows of Prayer are an apostolate of prayer,” Huntington Servant Leader Catherine Fitzgerald said.

Members devote their supplication to vocations to the priesthood, to priests and to church leaders: These prayers have borne fruit within the dioceses in which they are located. The Most Rev. Kevin C. Rhoades, Bishop of Fort Wayne-South Bend, along with bishops in other dioceses with Widows of Prayer communities, have reported increases in vocations to the priesthood that they attribute in part to the widows’ faithfulness.

Widows of Prayer has its origins in the Diocese of Green Bay, Wis., in 1994, when Mary Reardon, along with Father John Guimond, OFM, called together a few widows to pray together for priests and church leaders. A Widows of Prayer community first formed in the Diocese of Fort Wayne-South Bend in Huntington in 2003, under the guidance of Father John Guimond; a second community formed in Fort Wayne when the number of members from Fort Wayne who were driving to Huntington for the meetings reached the point of filling three cars.

Currently, participation in the two Diocese of Fort Wayne-South Bend Widows of Prayer communities consists of five widows in Huntington, five in Fort Wayne and three at St. Anne’s retirement home in Fort Wayne. Historically their numbers have been higher, but as Fitzgerald pointed out, since members are usually elderly, the passing of one or another is a fairly regular occurrence. 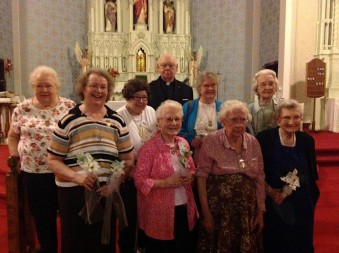 At Sts. Peter and Paul Church, Huntington, on Sept. 22, 2016, all 13 Widows of Prayer professed their Vow of Consecrated Life. Pictured from left to right, in the front row, are Catherine Fitzgerald, Mae Leedy, Veronica Bartoch and Vera Johnson. In the second row are Virginia Gibson, Mary Lou Sohn, Virginia Salge, Cecilia Baker and Msgr. Owen Campion, former interim administrator of Sts. Peter and Paul Parish. Not pictured are Marilyn Brown, Rita Carboni, Barbara Garrard, Mary Troutner and Dorothy Ward of Fort Wayne, who are homebound but attend occasionally when weather and their health permit.

Fitzgerald shared that all the members of the Huntington community belong to Sts. Peter and Paul Parish. Their community attends adoration on Wednesdays at Sts. Peter and Paul, and on Fridays at St. Mary Church, Huntington. They also participate in daily Mass and the praying of the Divine Office and the rosary. Three of the members are homebound, but still participate in the prayers through the assistance of EWTN and Redeemer Radio. In the last year, the community’s spiritual adviser, Father Silvino Ndayambaje, has also invited the members to pray the rosary at funeral visitations for parishioners.

Ginny Gibson, servant leader of the Fort Wayne Widows of Prayer, said the members of her community are from multiple parishes that include Queen of Angels, Our Lady of Good Hope, St. Charles, St. Jude and Most Precious Blood. The community participates in activities such as listening to CDs, studying the daily Mass readings and the Catechism of the Catholic Church, and sending cards to diocesan seminarians. In addition, the Fort Wayne and Huntington communities gather together once a month at a location that alternates between Huntington and Fort Wayne. They also meet with the St. Anne’s Widows of Prayer members every few months.

One of Gibson’s prayer concerns is the women she sees at her parish who have yet to express an interest in Widows of Prayer. She said there are five or six who attend daily Mass with the Fort Wayne community, but do not attend other events. She and her sister widows continue to reach out to potential new members, though, through bulletin announcements and personal invitations.

Fitzgerald and Gibson emphasize the power of their combined prayers, however, and the role that gathering together plays in supporting each other in daily life.

To learn more about the Widows of Prayer communities in the Diocese of Fort Wayne-South Bend, contact Fitzgerald at 260-356-8021 or [email protected]