A  former Swiss Guard who served and learned from Pope St. John Paul II delivered the 2019 Servus Omnium Lecture at the University of Saint Francis on March 5.

Andreas Widmer, now a professor who teaches entrepreneurship at The Catholic University of America, described “the vocation of business” with reflections about St. John Paul’s fatherly guidance to him, America’s need to counter the current appeal of socialism and workaday-world perspectives from a personal parable about crayons. 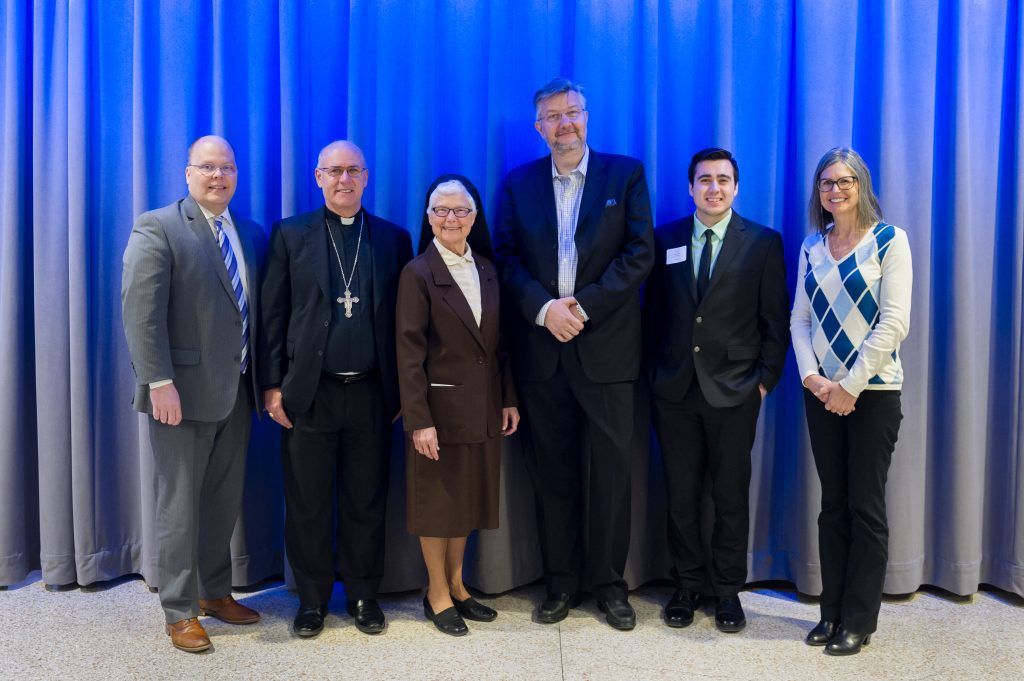 Speaking in Fort Wayne to more than 300 attendees at the breakfast gathering, which is one of the university’s signature events, Widmer recalled how the now-canonized pontiff “ministered to me” with encouragement on Christmas Eve in 1986. Over time, St. John Paul became a role model for leadership and spiritual growth for his bodyguard by helping him see God’s presence and discern distinct answers to the question, “Lord, what would you have me do?”

Once, returning from a business trip, he brought his young son a huge box containing crayons of every color, Widmer related. The boy asked, “What should I draw?” and “What color should I use?” but Widmer left his son free to choose, with only one request.

“I wanted him to use his gift and give [the final drawing] back to me,” he told the pre-Lenten gathering of leaders.

The speaker said he has discovered an analogy to God the Father’s love for us as we pursue our path in the world.

“God gives you a box of crayons — a gift, everything you have and don’t have, everything you are and you aren’t,” Widmer said. When He asks us to draw and we ask which circumstances or talents we should use, He responds, “All of it.” Everyone receives such gifts, including bright, joyful colors as well as dark colors, representing life’s sorrows, illnesses, unkind people, and other factors we might see as stumbling blocks or things to avoid. But, “we’re supposed to use every crayon, no matter how dark it is, and use it for the glory of God.”

One’s defining decisions are the intentions behind the drawing and the desire to present positive end-results, Widmer said.

If you have a gift well-suited to the for-profit business world, “you ought to use it,” he added. “The question becomes, whom do you make the profit for? What do you do with it?”

Widmer gave the audience a suggestion for Lent: “Meditate upon whether there are crayons you haven’t used, or crayons you’ve used selfishly.”

Recalling how his learning began in Vatican City, Widmer noted that the spiritual shepherd he worked for had recognized — and canonized — numerous, diverse people who used their distinctive gifts to bear fruit for others. Widmer said St. John Paul enlarged an inspiring “art gallery” of new saints where Catholics could find role models.

“As we go through Lent, we should think about the perfect model for us — the perfect person who ever lived, which is Jesus Christ,” he said. A person’s intentions as they utilize their talents and life circumstances must be driven to yield beautiful outcomes for God, in business or any other field.

In response to a question about the growing popularity of socialism as a concept in the United States political arena, he added. “John Paul would certainly be very concerned about this.”

The current trend reveals a low level of understanding about socialism and is more a result of emotion than of reason, Widmer commented, adding that the response must “fight emotion with emotion.”

As a professor at Catholic University’s Busch School of Business, Widmer said, “I lived the American dream.” He led successful business startups in the U.S. following his Vatican City service.

He said the successes of the free enterprise system in the U.S. need to be communicated better. “With the free market system, we have reduced poverty like it has never been reduced in the world. We need to show the stories of the American entrepreneur, the story of the American business person, the story of small- and medium-sized businesses,” demonstrating sources of prosperity that have improved living conditions internationally.

The lecture by Widmer, who is the co-founder and director of the Arthur & Carlyse Ciocca Center for Principled Entrepreneurship at Catholic University in Washington, D.C., was this year’s installment of the University of Saint Francis lecture series named for the Latin phrase “Servus Omnium,” or “servant of all.” The term comes from a letter in which St. Francis of Assisi wrote, “Being the servant of all, I am bound to serve all and to administer the balm-bearing words of my Lord.”

Among those present were representatives from regional businesses; Bishop Kevin C. Rhoades, who offered a morning prayer; and USF president Sister M. Elise Kriss, OSF, a member of the Sisters of St. Francis of Perpetual Adoration, the Mishawaka-based order that promotes the school’s Franciscan values.